Tom Vecchio going over all the data and brings you the top stacks for tonight's DFS MLB slate. 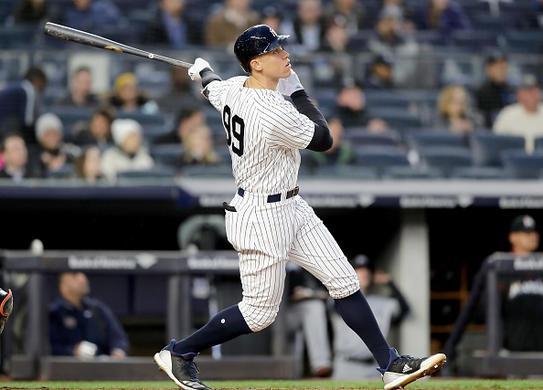 The Yankees come in with an implied run total of 5.44, making it the third highest on the slate, but the highest outside of the two teams at Coors Field. Tonight they are up against Kendall Graveman from the Athletics, who comes in giving up .445 wOBA to left-handed hitters and a .379 wOBA to right-handed hitters. Those are some bad numbers and it doesn’t stop there, as he is giving up 2.03 HR/9 or higher to both lefties and righties. We all know that Yankee Stadium is a fantastic hitter’s park, so the multi home run upside for this team is big tonight. Ultimately, what it comes down to with the Yankees, is how many of them can you fit into your lineup due to their prices. Aaron Judge , Giancarlo Stanton , and Gary Sánchez are the ones you want to be getting into your lineup if possible but don’t forget about the rest of the lineup. Neil Walker is looking good as of late, Brett Gardner is too cheap in the leadoff spot, and Aaron Hicks should be back in the lineup after having the day off yesterday.

The Braves are up against Dan Straily , who only has two starts under his belt this season, so let’s take a look at his numbers from last season. Straily gave up 1.17 HR/9 or higher to both lefties and righties last year, which was due in large to his FB% being 45% or higher to both types of hitters. This game is in Miami, which is a pitcher’s park, so some DFS player might be afraid to go here for offense. The Braves have an implied run total of 4.37, which is decently high on this slate. If Straily has numbers like that, you can go to either type of hitters, so target Freddie Freeman , Ozzie Albies , Kurt Suzuki , Ender Inciarte or Ronald Acuña Jr.

The Mariners have the chance to be lowered owned today for a number of reasons, so let’s dive in. First off, there are some weather concerns with this game, so most people will likely stay away due to postponement concerns, which is the first factor. The second factor is the fact they are going up against Matt Boyd , who actually has some decent numbers this year, but they likely aren’t sustainable. This season he is giving up a .294 wOBA to righties, while last year he gave up a .357 wOBA. That difference is relatively large, and we should be seeing some regression to the average of those. That means he is likely to have a decline from here, and you want to buy in “low” before other DFS players catch on. If you go this route with the Mariners, look for Ryon Healy , Jean Segura , Mitch Haniger , and Nelson Cruz .