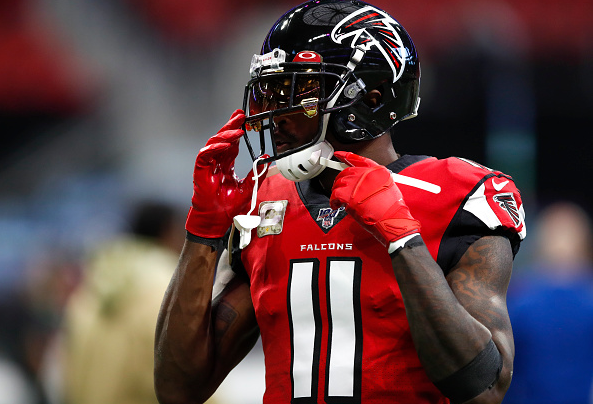 I hope that everyone had a happy and healthy Thanksgiving filled with family, food and football.  Now that the norm has become three NFL games on Thanksgiving Day, fantasy GMs need to pay closer attention to the injury status of players because of the short turnaround as well as it being a critical juncture of the season.  Hopefully, GMs remembered to set lineups and make decisions about players before getting induced into a tryptophan coma from all the turkey.  Now that the holiday is over, GMs can focus on the remaining part of Week 13 that represents the final week of many leagues’ regular season.  So without any further ado, let’s take a look at some of the walking wounded in the fantasy football emergency room.

Fantasy GMs had part of their Thanksgiving holiday ruined by Julio Jones missing Thursday night’s game against New Orleans.  He tried testing his shoulder before the game, but was ruled out. The team did not like what it saw.  This was a huge loss for GMs who needed their elite wide receiver in the final week of most leagues’ regular seasons.  Jones has had a solid season catching 64 passes for 950 yards and four touchdowns.  GMs worried that the Falcons might shut him down should feel slightly relieved that head coach Dan Quinn indicated he has no intention of shutting Jones down with four games left to play.  Now Jones will have ten days to rest and recover for Week 14 against Carolina.

Chiefs wide receiver Tyreek Hill has been practicing in a full capacity this week and will be ready to go for Week 13 against Oakland.  Hill pulled his hamstring early in the Week 11 game against the Chargers and never returned.  Kansas City’s bye week came at the right time as he has had almost two weeks to rest and recover.  This allowed him to get healthy and he will be a welcome addition in fantasy lineups as he looks to explode against a Raiders defense that got lit up by the Jets last week.  Hill is a high-end WR1 for this favorable divisional matchup between two teams fighting for their playoff lives.

The Cowboys have been in freefall mode over the past few weeks and could be in big trouble going forward if Amari Cooper misses any time.  He was targeted 11 times during the Cowboys loss to Buffalo on Thanksgiving.  However, he underwent x-rays on his knee that had been already injured.  He took a hit late in the game so now the concern will be whether there was any additional damage to the knee.  His status will have to be closely monitored before Dallas takes on the Bears next week.  Cooper has been a great fantasy asset this season catching 64 passes for 971 yards and seven touchdowns.  He would be a huge loss for GMs next week during the first round of the fantasy playoffs.

The Colts just cannot stay healthy as T.Y. Hilton has been ruled out for Week 13 against Tennessee.  He returned last week against Houston and was limited to just three receptions for 18 yards.  Hilton apparently suffered a setback during practice earlier this week and has already been ruled out for Sunday.  This is a big loss for fantasy GMs, but they have already been without Hilton for four games this year.  Rookie Parris Campbell seems like a longshot to come back this week, so look for Zach Pascal and Chester Rogers to see a bulk of the targets.  This is especially true with Marlon Mack injured and Eric Ebron out for the season.  Tennessee’s defense/special teams could be a solid streaming option this week against the depleted Colts.

Fantasy GMs got a big scare on Wednesday when Derrick Henry left Tennessee’s practice early with a hamstring injury.  Fortunately, he returned to practice the next day in a limited capacity and should be ready to go on Sunday in a big divisional matchup against the Colts.  Henry has been on fire lately, rushing for 410 yards and scoring six touchdowns over his past three games.He is a bona fide RB1 and should continue producing at an elite level.

Vikings wide receiver Adam Thielen has been dealing with a hamstring injury for several weeks.  He attempted to return last month only to re-aggravate the injury and required an even longer absence.  Now he is attempting to come back again, but he had what is being referred to as a “slight scare” earlier in the week that caused him to miss practice on Wednesday.  This is extremely concerning for fantasy GMs who were hopeful that he would be back on the field for Monday night’s showdown against Seattle.  Thielen has been limited to parts of eight games and has caught 27 passes for 391 yards and six touchdowns.  He is a rock solid WR2 when healthy, but he comes with a lot of risk even he does play on Monday.  Fantasy GMs should be prepared to go with an alternative again. 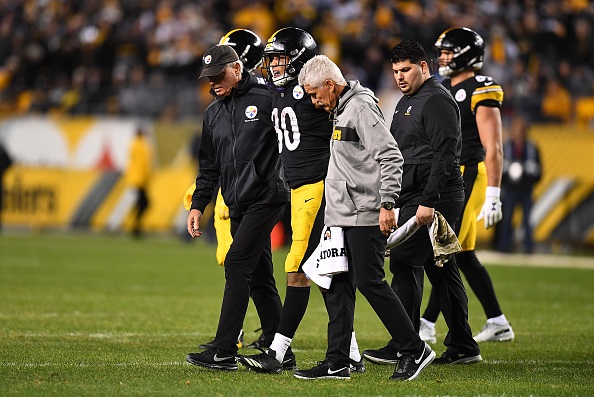 It is becoming cumbersome writing about James Conner almost every week.  The Steelers running back is trying to work his way back from a shoulder injury that has kept him out of the lineup for the better part of the last several weeks.  He did return to practice in a limited capacity on Thursday, so this is a step in the right direction for him.  However, it is too soon to tell whether he will be able to take the field against the Browns on Sunday.  Fantasy GMs may have to wait until the last minute for Pittsburgh to make a decision.  Conner would be a low-end RB2 if he does play, and the same would go for Benny Snell and Jaylen Samuels in the event he does not play.

The Eagles have been completely decimated by injuries, but there is good news as Zach Ertz is expected to play this weekend against Miami.  He will return to practice on Friday after dealing with a hamstring injury all week.  Ertz’s presence will be a huge relief for Carson Wentz who has struggled mightily of late due to several wide receivers being out of action.  Ertz should be in for a monster game against a terrible Miami team, so fantasy GMs can bank on a big day from him.  This would come at just the right time as the fantasy playoffs are set to begin next week.

The Steelers will likely be without JuJu Smith-Schuster for at least another week as they continue to be severely undermanned.  There was positive news this week as Smith-Schuster was cleared from the league’s concussion protocol.  However, he is still dealing with a knee injury that he suffered on the same play he was concussed.  The knee injury is preventing him from returning to practice, so it seems unlikely he will be back on the field for Week 13.  Smith-Schuster would be nothing more than a WR3 or WR4 if he did play because he would be less than 100% with third-string quarterback Devlin Hodges calling the shots.

The Giants just cannot stay healthy this year as Golden Tate will miss this week’s game against Green Bay due to a concussion.  He suffered the injury catching a touchdown last week against the Bears and was unable to recover soon enough to play in Week 13.  This leaves rookie quarterback Daniel Jones extremely shorthanded again at the wide receiver position.  Tate has been very productive in the seven games he has played catching 36 passes for 450 yards and four touchdowns.  He can remain on the bench this week and should be stashed as he will be a valuable commodity during the fantasy playoffs assuming he is able to return from the concussion.

Howard has missed the last two games with a shoulder injury and appears headed towards making it three in a row since he has not been cleared for contact yet.  This means that Miles Sanders and Jay Ajayi would be filling the void once again.  This could be a huge game for Sanders going up against a lackluster Miami team and the Eagles needing to rely on the running game since their wide receivers are so banged up.  Sanders would be a solid RB2 option for GMs who should still be stashing Howard for the fantasy playoffs.

Giants tight end Evan Engram will miss his third consecutive game with a foot injury this week against the Packers.  The team will also be without Rhett Ellison , so the Giants will once again go with Scott Simonson and Kaden Smith at the tight end position.  This is bad news for Daniel Jones who is already without Golden Tate .  Engram has the potential to be an upper-echelon fantasy tight end, but he can never stay on the field long enough to gain the trust of fantasy GMs.  Green Bay’s defense should be considered as a streaming option given the Giants’ plethora of injuries and propensity for turning the ball over.

Chiefs running back Damien Williams continues to suffer from a ribs injury that has prevented him from practicing this week.  His status for Week 13 is questionable at best, but even if he does play he will likely be limited in the number of snaps he takes.  Injuries to the ribs can be quite painful, so it is subjective how long a player needs to recover.  Williams has not had a great offensive season thus far rushing for 309 yards and three touchdowns along with one receiving touchdown.  He will cede carries to LeSean McCoy and Darrel Williams either way, so fantasy GMs should plan on an alternative for him this week.

Sanu missed last week’s game against Dallas with an ankle injury but seems to be trending in the right direction this week.  He was limited in practice on Thursday and is questionable for Week 13 against Houston.  Sanu would be a very helpful boost for Tom Brady and the Patriots’ offense which has been sputtering over the past several weeks.  Sanu is nothing more than a low-end WR3 if healthy, but he could take advantage of a  depleted Houston defense.

The revolving door of Patriots’ kickers took another turn this week as New England released Nick Folk and signed Kai Forbath to play this Sunday.  Folk has played the last three games but is recovering from an appendectomy and was not going to play in Week 13.  New England then released him so they could sign Forbath to be the team’s third kicker since Stephen Gostkowski went down for the year.  Forbath is worth a flier on the waiver wire as a streaming option since almost anyone who puts on a Patriot jersey automatically becomes fantasy relevant.