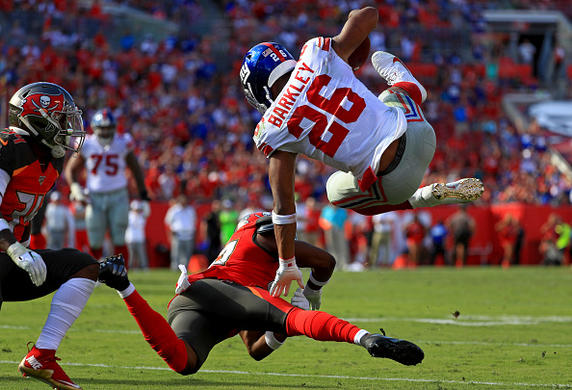 After losing two star quarterbacks to serious injuries last week, we can now add an elite running back to the list of this season’s casualties.  Fantasy GMs are all susceptible to the same risks when it comes to injuries. No player is any safer than another is, so in that sense everyone is on an even playing field.  However, when the number one overall draft pick goes down with an injury requiring a potential multi-month absence, then a GM can be severely handicapped with his/her roster for quite some time.  So without any further ado, let’s take a look at some of the walking wounded in the fantasy football emergency room.

Fantasy GMs can just enter themselves into therapy now as the consensus number one overall draft pick is now injured.  Saquon Barkley sustained a high ankle sprain that was confirmed by an MRI on Monday and he is expected to miss between one to two months.  It is reasonable to expect that he will be out for closer to two months given that the Giants will not rush him back. This is a devastating loss for fantasy GMs who likely invested the top overall draft pick on Barkley and will now be floundering to replace his statistics.  He has rushed for 234 yards and two touchdowns along with 11 catches for 74 yards through two-plus games. The Giants will lean on Wayne Gallman as their primary running back so he is worth a flier on the waiver wire. However, do not expect much production from him as the team will also scour the free agent market to bring in some reinforcements.

Newton missed this past week’s game against Arizona with a foot injury and he has already been ruled out of Week 4 as well.  At least fantasy GMs do not have to stress over making a decision for this week as we know Kyle Allen will get a chance to follow up on his impressive showing last week against the Cardinals.  Allen’s performance gave Carolina some sense of calmness allowing them to be conservative with Newton’s recovery. Incredibly, Allen is worth a look on fantasy rosters this coming week against Houston who has allowed a some big games to opposing quarterbacks thus far this season.  However, there will not be any quarterback controversy in Carolina as Newton will reclaim his job once he is physically able to do so.

Colts wide receiver T.Y. Hilton has gotten off to a hot start to the season with 20 receptions for 195 yards and four touchdowns.  This production has been a pleasant surprise given the sudden retirement of Andrew Luck last month. Hilton has thrived with Jacoby Brissett under center but he left last week’s game against the Falcons when he re-aggravated his quadriceps injury.  His status is questionable at best for Week 4 against Oakland. Fantasy GMs are hoping that Hilton can play because he would have a very favorable matchup against a soft Raiders defense. The Colts do not have a lot of other viable options at wide receiver, so look for Eric Ebron and an assortment of running backs to see the most action if Hilton is unable to play in Week 4.

Edelman was taken out of this past week’s game against the Jets with an injury to his chest and ribs.  He underwent x-rays that came back negative and coincides with the Patriots’ belief that he did not suffer a significant injury.  Edelman has been his usual solid self thus far with 17 catches for 196 yards and one touchdown. Now that Antonio Brown is gone, we can expect to see Edelman regain his number one receiver status on the team.  However, it does not matter who lines up outside for Tom Brady as he makes all receivers relevant in fantasy leagues. If Edelman does indeed require additional time to recover, then look for Phillip Dorsett to continue being a frequent target.

The Eagles are severely banged up at wide receiver and were without both Alshon Jeffery and DeSean Jackson this past week against the Lions.  The good news is that Jeffery has a good chance of playing this Thursday night against Green Bay as he works his way back from a calf injury. Philadelphia is hopeful he can return to practice before Thursday and then take the field to give Carson Wentz a dependable option at wide receiver.  Green Bay’s defense has shut everyone down thus far so Jeffery could be in for a long day, especially if he is not 100% by Thursday.

The running back situation in Green Bay has gotten a bit murky.  Aaron Jones was clearly the starter and primary rusher, but this week he was out-rushed by Jamaal Williams in what appears to be a desire to get both running backs equal touches.  Jones did run for two short touchdowns, but he was arguably outplayed by Williams who had more rushing and receiving yards. Jones is still the better running back to own from a fantasy perspective after what he did last year as well as his ability to find the end zone.   However, he now slips to a low-end RB2 or Flex option due to Williams impeding on his playing time. Green Bay had to submit an injury report on Monday due to their game this coming Thursday, so they listed Jones as participating in practice in a limited capacity with a shoulder injury despite not having a practice.   He is fully expected to play on Thursday night against the Eagles but temper expectations for his production.

Williams is technically the back-up running back in Green Bay but head coach Matt LeFleur indicated that he wanted to “even up” the touches that Williams and Aaron Jones get during the game.  That did in fact happen as Williams outgained Jones in terms of yardage. However, Jones scored two touchdowns so they essentially canceled each other out. What this means is that Williams returns to fantasy relevancy as the Packers have shown a clear commitment to the running game.  Williams should absolutely be targeted on the waiver wire and is expected to play on Thursday night against the Eagles despite dealing with a neck injury.

Gabriel is one of those players who fantasy GMs consider adding because of the accumulated statistics but then never pans out.  That is primarily because he accrues his fantasy points in bursts and never can sustain that success over an extended period. This was epitomized on Monday night against the Redskins when he had six catches for 75 yards and three touchdowns in the first half.  However, he sustained a concussion and was removed from the game. His status for Week 4 is in jeopardy because the Bears have a short week. Despite that, Gabriel is simply an impulse waiver wire option and GMs should avoid the temptation and stay away from him.

We knew the news was not good regarding Browns tight end David Njoku who sustained a broken wrist last week.  Cleveland has now placed him on injured reserve meaning he will miss at least eight weeks before being eligible to return.  This is a big loss for the Browns who have Ricky Seals-Jones and Demetrius Harris to take over at tight end. Neither player is worth targeting on the waiver wire so GMs should be hopeful that Baker Mayfield relies on Odell Beckham , Jr. and Jarvis Landry even more in the passing game.  Njoku is certainly worth dropping now as it is not worth taking up a roster spot to hold onto him until November.