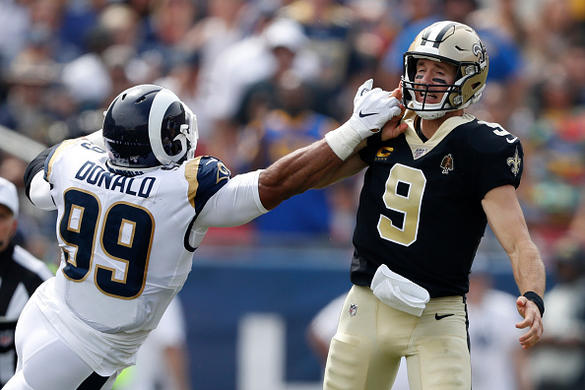 It did not take long for fantasy GMs to see their season put in major jeopardy with the loss of some very important players.  It was a painful second week of the season with many impactful injuries that will have a ripple effect across everyone’s rosters.  This should not come as a surprise to anyone as we deal with this chaos every week and every season. That does not make it any less difficult to deal with, so GMs need to be proactive with the waiver wire and attempt to bolster rosters with reinforcements.  So without any further ado, let’s take a look at some of the walking wounded in the fantasy football emergency room.

Drew Brees has been a fixture in the NFL for almost two decades and epitomized durability and consistency throughout his career.  Even at 40-years old he is still playing at an elite level on a team with Super Bowl aspirations. That all came crashing to a half this past weekend when Breese suffered a torn ligament in his right hand against the Rams.  He will need surgery to repair the injury and is expected to miss six to eight weeks. This is a devastating injury for the Saints and fantasy GMs who will see a ripple effect from this catastrophe. This injury severely affects the value and productivity of players like Alvin Kamara and Michael Thomas who will now be led on offense by Teddy Bridgewater .  Fantasy GMs should stash Brees on the bench because he is expected back within a couple months and consider Bridgewater as a replacement since he does have many weapons at his disposal. Just do not expect to see similar statistics.

Continuing the trend of catastrophic quarterback injuries, we now turn to the debacle in Pittsburgh where Ben Roethlisberger ’s season is officially over.  He suffered an elbow injury during the Steelers’ loss to Seattle in Week 2 and an MRI confirmed that he would need season-ending surgery. This is an even more catastrophic scenario for fantasy GMs who have Steelers players such as James Connor, JuJu Smith-Schuster and Vance McDonald .  Pittsburgh will now be led by Mason Rudolph who should be targeted on the waiver wire as a replacement for Big Ben. Roethlisberger was coming off one of the best seasons of his career but now his future is in serious doubt.

Not only are the Steelers dealing with the loss of Ben Roethlisberger , but they are also concerned about the health of running back James Conner .  He suffered a knee injury against Seattle this past weekend and had to be taken out of the game. The good news is that the injury does not appear to be serious but it could limit his availability for Week 3 against San Francisco.  Connor has not gotten off to the greatest start to the season running the ball 21 times for 54 yards and one touchdown along with seven catches for 56 yards. He will need to step up now that Big Ben is done for the year. However, this knee injury opens the door for backup Jaylen Samuels to see an expanded role even if Conner does play.

Raiders rookie running back Josh Jacobs has gotten off to a great start to his career rushing for 184 yards and two touchdowns through his first two games.  However, head coach Jon Gruden indicated that Jacobs is dealing with a groin injury that could impact his availability for next week against Minnesota. Jacobs was not used at all in the passing game but has certainly been a workhorse running the ball early in the season.  GMs should be concerned about his status because even if he does play next week he will be doing so at less than 100% against a very solid Vikings defense.

Jon Gruden also advised that Tyrell Williams suffered a hip pointer that could affect his status for next week’s game against the Vikings.  This is especially troubling considering that Williams will be covered by Xavier Rhodes that will likely limit his productivity. Williams has thrived as the Raiders primary wide receiver catching 11 passes for 151 yards and two touchdowns through the first two games.  GMs should check back later in the week for an update on Williams whose potential absence makes the Vikings D/ST a great fantasy option.

The Eagles have struggled to keep their wide receivers healthy thus far as they lost both Alshon Jeffery and DeSean Jackson on Sunday night against the Falcons.  Jeffery suffered a calf injury and was taken out of the game on Sunday night. His status for Week 3 against Detroit is in doubt right now due to the strained calf, but we should know more later in the week.  Jeffery is a solid WR3 in any league format and has five receptions for 49 yards and one touchdown along with a rushing touchdown through the first two games. If Jeffery and Jackson are unable to play next week then look for J.J. Arcega-Whiteside to emerge as a viable fantasy starter along with Nelson Agholor .

Chiefs running back Damien Williams suffered a knee injury during the team’s win over Oakland on Sunday.  He was removed from the game in the fourth quarter and did not return. His status for Week 3 is questionable at this point, as we will have to see whether he can practice at all and how his knee responds.  Fantasy GMs had high expectations for Williams heading into the season after he excelled last year taking over for Kareem Hunt . However, Williams has been disappointing thus far rushing the ball 22 times for only 34 yards and one touchdown through the first two games.  Check back later in the week for an update on his status and consider Darwin Thompson as a waiver wire alternative.

Shady McCoy had an MRI on Monday that did not reveal any structural damage to his ankle.  He injured his ankle on Sunday against Oakland but the good news coming out of the MRI is that he has a chance to play next week against Baltimore.  McCoy has rushed the ball 21 times for 104 yards and caught four passes for 12 yards through his first two games with the Chiefs. Kansas City is thin at running back with Damien Williams also banged up, so look for Darwin Thompson to see a bigger role against the Ravens.

Dallas has gotten off to a red hot start to the season thanks in large part to the emergence of Michael Gallup as a complement to Amari Cooper .  Gallup has 13 catches for 226 yards and no touchdowns through the first two games making him a viable fantasy option. However, he suffered a torn meniscus and will have arthroscopic surgery to repair the injury.  There was no structural damage to his knee so he is expected to make a quick recovery within an estimated two to four weeks. Devin Smith should see a majority of the playing time in Gallup’s place as he had 74 yards receiving and a touchdown on Sunday against Washington.

The Browns rebounded on Monday night with a decisive victory over the short-handed Jets, but they lost tight end David Njoku in the process.  He was targeted only once and on that play he landed on his head and injured his neck. Njoku was taken out of the game and diagnosed with a concussion.  His status for Week 3 is in serious jeopardy given that Cleveland is on a short week so GMs should start looking for other options.

Bills rookie running back Devin Singletary was taken out of Sunday’s game against the Giants in the fourth quarter with a hamstring injury.  He has only rushed the ball ten times over the first two games but has accumulated 127 yards and one touchdown along with five catches for 28 yards.  He has yielded carries to veteran Frank Gore but it is readily apparent that Singletary has the potential to be a very solid NFL running back. Singletary’s status for Week 3 is unknown at this point, but we should have more clarity later in the week.  Singletary would be a solid RB2/Flex option next week against a weak Cincinnati defense.

Siemian got the start for the Jets on Monday night due to the absence of Sam Darnold who will be out for several weeks with mono.  He was 3-for-6 for three yards and was sacked twice before he sustained a gruesome injury when his left leg was caught underneath him as Myles Garrett drove him to the ground.  Siemian was somehow able to walk off the field, which is incredible given how bad it looked when his ankle got bent backwards. Siemian was replaced by second-year quarterback Luke Falk who could see some playing time over the next couple of weeks unless the Jets bring in someone else from outside the organization.  These developments certainly diminish the value of players such as Le’veon Bell, Jamison Crowder and Robbie Anderson.

P. Peterson - DB
ARI
General manager Steve Keim confirmed Friday the team had discussed Peterson's contract with his representation, noting nothing has transpired yet, but that "we'd love to see him retire as a Cardinal," Grant Gordon of NFL.com reports.
For a full breakdown and detailed player analysis GO PRO and join the Fantasy Alarm Family! CLICK HERE to unlock your PRO package and take advantage of instant savings!
Added Feb 15 12:45 pm (EST)