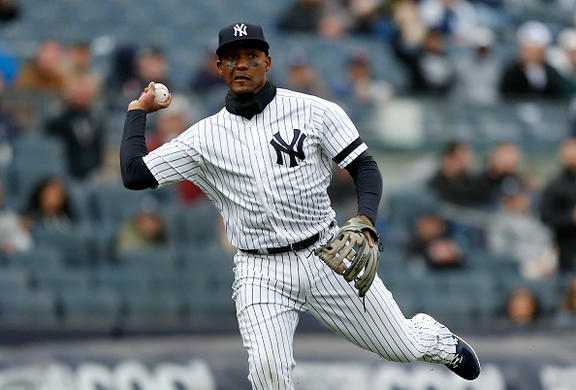 It did not take long for fantasy GMs to scramble with their lineups and rosters thanks to serious injuries to impact players.  We all know injuries are a part of the game and everyone is equally susceptible. The key to succeeding in fantasy baseball is to overcome such adversity by accumulating depth, aggressively scouring the waiver wire, and being proactive with trade negotiations.  So without further ado, here is the next edition of the 2019 fantasy baseball emergency room. 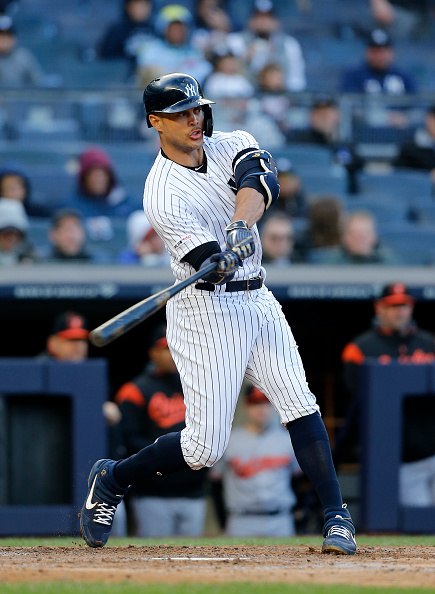 The Yankees are filling up the emergency room quicker than any other team in baseball since spring training.  Slugger Giancarlo Stanton has been placed on the 10-day injured list with a strained left biceps that he may have suffered while swinging at a pitch.  This is obviously a huge blow to the Yankees and fantasy GMs who are depending on his 40-plus home run power and 100-plus RBI. Clint Frazier has been recalled from the minor leagues and is expected to get a bulk of the playing time while Stanton is out.  Frazier has been a top prospect for several years now and this may finally be his best opportunity at consistent playing time. Frazier is a must add off the waiver wire as we do not have any idea yet on how long Stanton might be out.

Lindor was nearing the end of his rehab from a calf strain he suffered early in spring training when he sustained a sprained ankle in a minor league game last week.  He was set to see an ankle specialist earlier this week so we should know more once the Indians disclose how that evaluation went. Fantasy GMs should be very concerned because ankle injuries can require extended absences, especially when they are on top of a compromised leg which is the case with Lindor.  When he got injured in February, the expectation was that he would miss maybe a week or two of the regular season. Now that time frame has significantly increased so GMs will need to make longer-term arrangements to replace him.

The saga of Clayton Kershaw may be heading to its ultimate end as the former multiple time Cy Young Award winner is scheduled to make a rehab start for the Dodgers Triple-A team later this week.  He has been dealing with a shoulder injury since the beginning of spring training but he seems to be on the road to recovery. He will have to be re-evaluated after the start on Thursday to see whether he will need another minor league outing or if he can rejoin the Dodgers as soon as next week.  Fantasy GMs should be very excited about this news because Kershaw’s ADP plummeted throughout March and GMs were able to select him at a tremendous discount.

Daniel Murphy sustained a fractured left index finger and will be undergoing some additional tests with a hand specialist to determine if the injury is worse than that.  The fear is that he may have sustained mallet finger which indicates damage to the tendon. If this is the case, then Murphy will be sidelined for an extended period of time.  Fantasy GMs were banking on a huge season from Murphy now than he is playing in Colorado but those hopes have been temporarily dashed. His absence means Garrett Hampson should see more playing time while the versatile Ryan McMahon can move over to first base.  Stash Murphy on your IL and hope that it is just weeks and not months before he can return.

The Yankees truly have been the walking wounded since spring training as another key piece of their roster will be out for an extended period of time.  This one could be very serious as Miguel Andújar has been diagnosed with a small tear of his right labrum. He plans on resting and rehabbing first, but season-ending surgery is still a possibility.  He is expected to undergo some additional testing in a couple weeks so we won’t know more until later in April. For now GMs should stash him in an IL spot and hope that he can come back sooner than later.  D.J. LeMahieu is expected to see a bulk of the playing time at third base making him a must add if he is available on the waiver wire.

On a more positive note, Braves starting pitcher Mike Foltynewicz is scheduled to make a minor league rehab start later this week and could be back in Atlanta’s rotation by early next week.  This is great news for fantasy GMs who were banking on a repeat performance of his stellar 2018 season in which he went 13-10 with a 2.85 ERA, 1.08 WHIP and 202 strikeouts in 183 innings. The Braves have gotten off to a sluggish start so his return would be a big boost to their rotation.  While it is very positive that Foltynewicz could be back soon, GMs will still be concerned of any additional elbow issues that could pop up during the season. 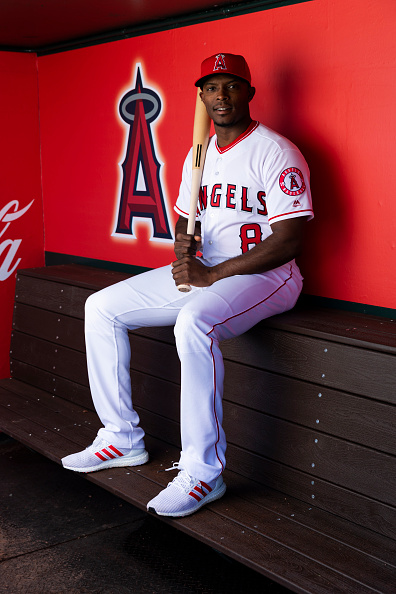 Fantasy GMs received some bad news that Justin Upton will be out for two to three months due to sustaining turf toe at the end of spring training.  The injury did not appear serious initially as he was expected to just miss the first week or two of the season. However, further testing must have revealed a more severe injury and now GMs will be without a big outfield bat for quite some time.  The Angels internal options are not viable fantasy replacements, so look elsewhere for alternatives to cover you through June.

The inevitable has been confirmed that Corey Knebel will have Tommy John surgery to repair his torn right UCL.  He has been dealing with a torn UCL for several years but it finally came to a head this spring training and now the Brewers relief pitcher will miss the entire 2019 season and beginning of 2020.  He was expected to be part of a dominant Milwaukee bullpen but now Josh Hader should be cemented as the Brewers’ closer at least until Jeremy Jeffress comes back. Knebel can be dropped in all league formats.

It appears that 2018 was the exception to the rule when Heaney remained healthy because he is back to his old ways starting 2019.  He was working his way back from an elbow injury when he felt more discomfort in the elbow during a recent side session. He was seen by a specialist who diagnosed him with chronic changes in his left elbow and he was given a cortisone shot.  The Angels indicated he can resume throwing in about a week and a half but it is anybody’s guess when he might actually make his 2019 season debut. Keep him stashed on your IL for now but monitor his progress because if he has any setbacks then he could be a strong candidate to be vanished to the waiver wire.

Fantasy GMs are having buyers’ remorse after likely spending significant FAAB dollars on Hunter Strickland coming off his two saves to open the season in Japan.  He got lit up in his last appearance blowing a save, and then it was revealed that he is suffering from a Grade 2 strain of his right lat. The Mariners have acknowledged that Strickland could be sidelined for a couple months so he can be dropped in all league formats.  Anthony Swarzak is expected to be activated from the injured list this week and is the favorite to take over ninth inning duties for the Mariners.

Wendle sustained a left hamstring strain while attempting a stolen base over the weekend and has been placed on the 10-day injured list.  He is expected to miss a couple weeks of action so players like Brandon Lowe , Daniel Robertson and Christian Arroyo should all see playing time in Tampa Bay’s middle infield.  Wendle hit .300 with seven home runs, 61 RBI, 62 runs scored and 16 stolen bases while also qualifying at multiple infield positions last year, so he does provide solid fantasy value in terms of middle infield depth.  That being said, he is not worth stashing if your IL spots are limited.

Fowler was hit by a pitch on his left foot on Monday and was taken out of the game.  This is the same foot that he broke last year which limited him to just 90 games. Fortunately, x-rays did not reveal any fractures but he is still going to undergo further testing this week.  He will be out for at least a few days to allow the swelling and pain to subside. Tyler O’Neill and José Martínez will likely share duties in right field while Fowler is out. Fowler should not be rostered in standard 12-team leagues as he needs to prove he can stay healthy and be productive before fantasy GMs begin trusting him again. 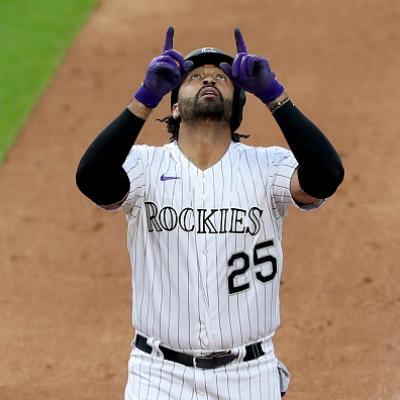 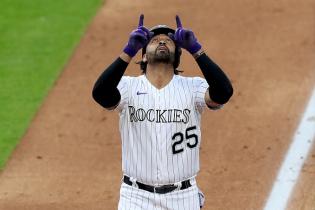 MLB Juan Soto returns from IL, not in lineup Tuesday

J. Yamamoto - SP
MIA
Marlins recalled RHP Jordan Yamamoto.
Yamamoto failed to crack the rotation out of summer camp, but he will be thrust into a starting role now. The right-hander could be worth streaming in favorable matchups.
Added 6:31 pm (EST)
Added 6:31 pm (EST)

D. Tate - RP
BAL
Dillon Tate (elbow) has resumed throwing at the Orioles' alternate training site.
Tate was placed on the 10-day injured list just before Opening Day after taking a comebacker to his right elbow during a summer camp intrasquad game. He's still probably a couple weeks away from being an option for the Orioles given the usual progression from flat-ground work to mound activity.
Added 6:22 pm (EST)
Added 6:22 pm (EST)

K. Davis - DH
OAK1
Khris Davis is not in the Athletics' starting lineup on Tuesday against the Rangers.
Davis slugged his first home run of the season on Monday and also had an RBI single, but it looks like the A's may continue to sit him against right-handers. Mark Canha will DH versus Texas righty Lance Lynn.
Added 6:17 pm (EST)
Added 6:17 pm (EST)

M. Brantley - LF
HOU1
Michael Brantley is out of the Astros' lineup Tuesday because of a quad injury.
And manager Dusty Baker said he might hold Brantley out Wednesday as well. Kyle Tucker, George Springer, and Josh Reddick are starting across the outfield for Houston on Tuesday night against the Diamondbacks and left-hander Madison Bumgarner. Abraham Toro is taking a turn in the designated hitter role.
Added 6:11 pm (EST)
Added 6:11 pm (EST)

T. May - RP
MIN
Trevor May earned a two-out save in the Twins' defeat of the Pirates on Tuesday.
May was brought into a ninth-inning jam created by Caleb Thielbar and promptly retired Josh Bell and Colin Moran to preserve a 7-3 victory for the AL Central-leading Twins. Taylor Rogers should see the majority of save chances this season in Minnesota, but May will remain a very useful secondary option.
Added 6:04 pm (EST)
Added 6:04 pm (EST)

R. Odor - 2B
TEX1
Rougned Odor (oblique) remains out of the Rangers' starting lineup Tuesday.
Odor was removed from Saturday's game against the Giants due to tightness in his right oblique, and he hasn't played since. Nick Solak is at second base Tuesday versus the Astros.
Added 6:01 pm (EST)
Added 6:01 pm (EST)

E. Hosmer - 1B
SD1
Padres manager Jayce Tingler expressed optimism Tuesday that Eric Hosmer (gastritis) will be ready to come off the disabled list this Saturday.
That is the first day that Hosmer is eligible to return from the 10-day IL. The veteran first baseman had tallied five hits with seven RBI through three games played this season.
Added 5:56 pm (EST)
Added 5:56 pm (EST)