Michael Stein brings you all the latest updates on injuries around MLB and the fantasy impact of players going on and coming off the DL. 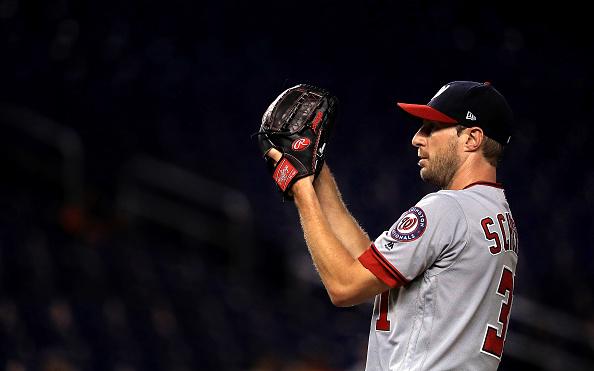 Fantasy GMs got another heart-stopping scare this week when another elite pitcher left a game early due to injury.  Injuries have no off days so every fantasy GM is living day by day hoping their roster of players can survive until tomorrow.  Many leagues’ trade deadlines are coming up very soon so this is your last chance to try and negotiate some deals to improve your roster either for the playoff push or for next season in keeper leagues.  You should address the specific needs you have and target certain players that will fulfill those needs without breaking the bank.  Focus on obtaining depth rather than blowing up your roster just to acquire a single star player.  So, without further ado, let’s delve into the next edition of the fantasy baseball emergency room.

Max Scherzer (SP-WAS) – Panic set in once again earlier this week when Scherzer departed his last start after one inning.  He was dealing with neck spasms as a result of sleeping on it wrong and indicated he would see a chiropractor.  The ace pitcher is having another stellar season with a 12-5 record along with 2.21 ERA, 0.84 WHIP and 201 strikeouts in 146.1 innings.  Washington is hopeful that he will be able to make his next start which seems plausible if it really is just some stiffness in his neck.  Whether he got the neck stiffness from getting a Viagra stuck in his throat is a story for another day.  While this was alarming and clearly cost GMs points due to only lasting one inning, Scherzer is one of the toughest pitchers in baseball and it would be shocking if he did not make his next scheduled start.

Khris Davis (OF-OAK) – The constantly rebuilding A’s finished off July by dealing away their ace pitcher in an attempt to restock the farm system.  Concurrently, their best power hitter was also out of the lineup on Wednesday as Khris Davis is dealing with a hamstring injury.  At this point the injury is not being considered serious by Oakland as Davis allegedly has been playing through it up until earlier this week.  Hamstring injuries are always tough to deal with, even if they are considered mild.  Despite a poor .238 batting average, Davis is having a solid season in terms of power and run production with 28 home runs and 71 RBI making him a viable starting outfielder in any league format.

Julio Teheran (SP-ATL) – It has been a disappointing season for Teheran to say the least.  Last year he pitched brilliantly and was victimized by a lack of run support.  This season, the Braves offense is much improved but Teheran has struggled to a 7-9 record along with a 5.10 ERA, 1.39 WHIP and only has 95 strikeouts in 125.1 innings.  He was taken out of his last start on Wednesday due to cramping in his thigh.  Teheran indicated that he will be ready for his next start and right now there is no reason not to believe him.  He has been a durable and dependable pitcher making at least 30 starts every season since 2013, so expect him back on the mound next week with a favorable matchup against the hapless Phillies.

Yunel Escobar (3B-LAA) – Escobar left Tuesday’s game with some back stiffness and has missed the past two days as well.  It isn’t known whether he will be able to return to the field this weekend as the Angels somehow hover around the second wild card only three games back.  Escobar has had a pedestrian season batting .275 with six home runs and 29 RBI.  These numbers are unacceptable for a fantasy third baseman, but he can be a solid alternative if you are depleted with injuries and need a warm body.  Luis Valbuena will take Escobar’s spot at third base while he is out.

Matt Davidson (3B-CHW) – Davidson was hit by a pitch on his wrist on Tuesday and sat out the next two games as a result.  He seems confident that he will avoid the disabled list but he has not had an MRI to confirm whether or not there is any structural damage to his wrist.  He provides a viable option at a corner infield spot in deep leagues with his 22 home runs and 51 RBI.  However, he is an albatross with batting average hitting only .238 with limited plate discipline.  The White Sox are in major rebuilding mode so expect Davidson to be given a chance to be a part of that.  He may need another day or two to rest up, so consider him day-to-day barring any setbacks.

Hansel Robles (RP-NYM) – For full disclosure, the only reason I am including Hansel Robles on this injury report is because I have never written about a playing claiming to have suffered pinched genitals before.  Robles does not belong on any fantasy roster, let alone MLB roster.  He threw one of the wildest pitches in baseball history to walk in the winning run against the Rockies on Thursday.  However, there may be an excuse for his Ricky Vaughn impression as he claims he was dealing with pinched genitals and some numbness in his hand.  It’s nuts to think that he didn’t tell Mets coaches how he was feeling because it detrimentally affected the way he pitched balls to batters.  Expect him to be placed on the disabled list or sent down to the minor leagues.

Michael Fulmer (SP-DET) – After weeks of trade rumors surrounding the Tigers young pitcher, Fulmer stayed exactly where he should.  However, he has been dealing with some numbness and tingling in his fingers and was placed on the disabled list.  Fulmer, the reigning American League Rookie of the Year, has been mediocre this season going 10-9 with a 3.59 ERA, 1.13 WHIP and 100 strikeouts in 140.1 innings.  The suspicion is that he may be dealing with a nerve injury which could be causing the numbness, so we do not know the extent of the absence that he is looking at yet.  Detroit has nothing to play for so they will not rush Fulmer back unnecessarily.  It would not be surprising if they simply shut him down for the rest of the season if his condition does not improve in short order.

Johnny Cueto (SP-SF) – Cueto was already on the disabled list due to blisters but suffered a flexor strain during a rehab start.  The good news is that he did not injure his UCL so GMs can take Tommy John surgery off the table for now.  Cueto’s time table to return is unknown but there may not be enough time for him to rest, recover and rehab before the season is over.  The Giants would be foolish to rush their lucrative investment back too soon since this is a lost season anyway.  Cueto can be dropped in redraft leagues because he will not be able to contribute anything down the stretch.

Andrew Miller (RP-CLE) – Miller has once again been dominant and unhittable, and it is insane to think that he is not even the Indians’ closer.  He has been placed on the disabled list with patella tendinitis in his right knee and we do not know yet how long he may be out for.  Miller is and will be an enormous part of Cleveland’s push towards the post-season so they need him back as soon as possible.  He is arguably the most valuable middle reliever in both real and fantasy baseball with a 4-3 record along with a 1.67 ERA, 0.76 WHIP, two saves and 78 strikeouts in just 54 innings.  These are elite numbers and he is worth starting in almost any league format.  Stash Miller on your bench or DL if you can, but also monitor his status for updates because if he is going to be out for several weeks then you may need that roster spot for something more important.

Dustin Pedroia (2B-BOS) – The grizzled veteran has been hobbled by injuries all year limiting him to 85 games.  However, in those 85 games, Pedroia is batting .307 with six home runs and 54 RBI.  He is currently on the disabled list with a knee injury and is eligible to be activated early next week.  He is expected to go through baseball drills and activities in the next couple days so his activation will be determined by how successful this goes.  Boston’s offense has sorely missed David Ortiz, but Pedroia continues to produce his typical numbers when he is healthy and on the field.  When Pedroia comes back, expect Eduardo Nunez to move back to third base which will limit the playing time for rookie Rafael Devers.

Scott Schebler (OF-CIN) – The Reds outfielder has demonstrated solid power this season but never can seem to do it with runners on base.  He has 23 home runs and 45 RBI which amounts to less than two RBI per home run.  That is a horrendous ratio and ranks up there with some other memorable seasons of disproportionate statistics.  Despite that and his .228 batting average, Schebler has provided fantasy value with his power but he was placed on the disabled list with a strain of his rotator cuff.  The good news is that he does not require surgery, but there is no indication when he might be able to return this season.  Given he was mired in a horrendous slump throughout July and the Reds essentially have no chance of making the playoffs, it would not be surprising if we don’t see Schebler again this season.  He can be dropped in all league formats and there are plenty of better options on the waiver wire.

J. Panik - 2B
TOR
Panik signed a minor-league contract with the Blue Jays on Saturday as a non-roster invitee, Rob Longley of the Toronto Sun reports.
For a full breakdown and detailed player analysis GO PRO and join the Fantasy Alarm Family! CLICK HERE to unlock your PRO package and take advantage of instant savings!
Added Jan 18 4:04 pm (EST)