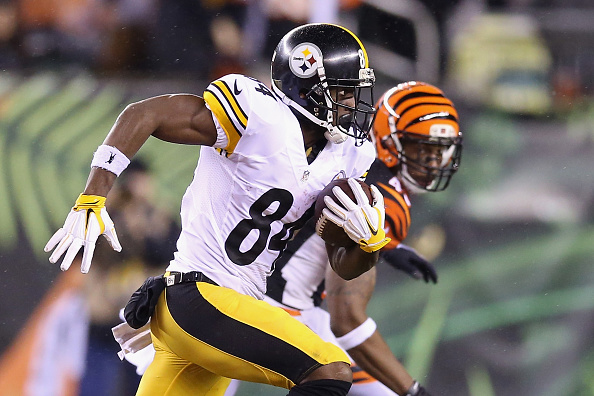 Why should the NFL playoffs be any different than the regular season?  The 2015 season will be remembered as one of the most tumultuous in history in terms of injuries and the effect on fantasy football.  The first round of the playoffs was exactly the same as this is one of the lengthiest injury reports of the entire year.  So without further ado, here is the next edition of the fantasy football walking wounded.

Vontaze Burfict has affected the NFL playoffs more than any other player thus far as his recklessness and stupidity cost the Bengals their game against Pittsburgh.  In addition, his cheap hit on Antonio Brown gave Brown a concussion and right now it does not appear that Brown will be able to play against Denver.  This is catastrophic for Pittsburgh for obvious reasons because Brown is arguably the best wide receiver in the league.  Check back in later this week for confirmation of his status, but operate under the presumption that Brown will not be on the field.

Big Ben suffered a shoulder strain last week against Cincinnati and he will likely be held out of practice most of the week.  Pittsburgh is hopeful he will be able to play because Landry Jones is simply not an option.  The Steelers are already likely going to be without Antonio Brown, so this will be a tall order for Roethlisberger who will have to rely on the likes of Martavis Bryant and Markus Wheaton.

Brady suffered a high ankle sprain in Week 17 but it will not affect his status for this week’s AFC Divisional Round game against Kansas City.  The bye week was a blessing for the Patriots because it allowed Brady extra time to heal.  He may not be 100 percent, but Brady in any capacity is better than most quarterbacks at full strength.  He should have Julian Edelman back on the field to add to his arsenal of weapons.

Lynch proclaimed that he was not ready to return before last week’s Wild Card game against Minnesota.  His status is unknown for the NFC Divisional Round game against the Panthers but right now it should be presumed he won’t be ready to go.  The Seahawks are hopeful he can at least return to practice in the middle of the week and test his body.  Beast Mode has been out most of the season with various injuries, but Seattle has managed to find a way to win without him.  That is what they are game-planning for against the 15-1 No. 1 seed in the NFC.

Williams did not play last week against the Bengals due to his ankle injury.  He went to a foot specialist early in the week and it seems like a long shot that he will be able to return this weekend against Denver.  The Steelers are already very short-handed with injuries to Antonio Brown and a banged up Ben Roethlisberger.  They had a lot of help last week from the undisciplined Bengals, but they likely won’t have similar charity from the experienced Broncos.  Look for Jordan Todman and Fitzgerald Toussaint to share the workload once against a solid Denver defense.

Maclin is likely going to miss this week’s game against New England with a high ankle sprain.  It appeared even worse when he suffered the injury last Saturday, but test results did not reveal a torn ACL.  This is a devastating loss for the Chiefs who will need all the offense they can muster against the Patriots.  Look for Kansas City to really depend on their running game even more in an attempt to keep the Patriots’ defense on the field as much as possible.

Adams was a major disappointment all season after being given an opportunity to replace Jordy Nelson.  He sustained another injury during Green Bay’s win over the Washington in the NFC Wild Card game last week.  The extent of his knee injury is not known for sure yet, but it is unlikely that he will be ready for Saturday’s game against Arizona.

Stewart is expected to return to practice in the middle of the week and it is anticipated that he will be ready to play against Seattle.  He missed the final three games of the regular season with a foot injury but will return against the Seahawks’ stellar defense.  Monitor his status during the week to ensure he doesn’t have any setbacks.  Assuming he survives practice without aggravation, expect him to line up behind Cam Newton and see a bulk of the carries.

Osweiler returned to practice in a limited capacity on Monday after dealing with a knee injury dating back a couple weeks.  He was replaced by Peyton Manning during Denver’s Week 17 win against San Diego and will continue backing up the legend in the AFC Divisional Round.  Manning’s health will continue to be a concern as long as Denver remains alive, so Osweiler has to stay ready to take the field if necessary.

Ware sustained a knee injury during Denver’s clinching victory over the Chargers in Week 17.  He was diagnosed with a sprained MCL but is expected to play this coming weekend against the Steelers.  Ware is one of Denver’s best pass rushers and will be a key piece to the Broncos’ defense in shutting down a vulnerable Ben Roethlisberger.