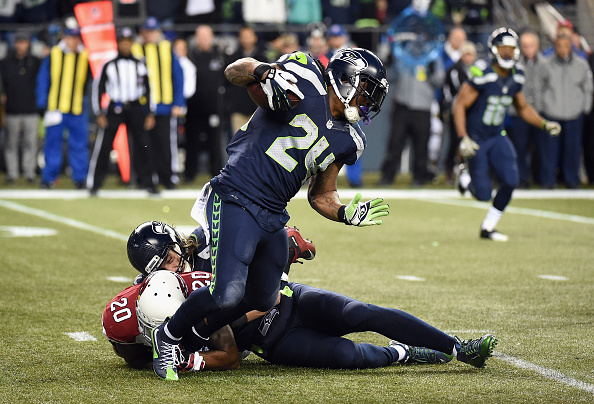 Week 16 is in the books which means most leagues have crowned their champions for 2015.  Congratulations to all of the league champions, especially this year because the incredible number of catastrophic injuries to star players wreaked havoc on everyone’s rosters.  If you won your league, then you likely demonstrated an impressive use of the waiver wire and cleverly made some trades to either augment your team or replenish what was lacking.  If your league extends into Week 17, then don’t feel left out because there are plenty of players with question marks who will likely have some type of impact on whether you win or lose.  So without further ado, here is the next edition of the fantasy football walking wounded.

Lynch may be able to return this week against Arizona if he can get back on the practice field and receive medical clearance.  He has missed the past several games after having surgery for a sports hernia.  Seattle’s running game is desperate for Beast Mode to come back after Thomas Rawls got injured and Christine Michael has been unproductive.  Check back in by the end of the week for a status update and see whether this elite running back can slide right back into your fantasy lineup as a RB1.

Colts quarterbacks have gone down faster than one can say “Hasselbeck.”  With Charlie Whitehurst out on injured reserve and Matt Hasselbeck doubtful for Week 17, all signs would point to a dramatic return for Andrew Luck if it was feasible,  Right now it does not appear the Colts have any intention of playing their franchise quarterback, but they could still make the playoffs and win the pathetic AFC South division title.  Monitor this situation during the week, but your best bet is to stay away from Indianapolis offensive players in Week 17.

Forte is just one of many running backs that have had quite disappointing seasons.  He missed three games this year due to injury and has scored only four touchdowns.  He was taken out of the second half of the game against Tampa Bay with a slight back injury.  It appears he could have gone back in the game, but the Bears cautiously held him out after just a few touches in the second half.  He should be fine to play next week in what will likely be his last game for Chicago with free agency impending.

As expected, Edelman did not play in Week 16 against the Jets but could be on track to return in Week 17 to get ready for the playoffs.   Edelman will play an enormous role for the Patriots during the post-season so they will want to re-acclimate him into the offense next week which could mean sneaky fantasy value.

While Peyton Manning was in the news thanks to an alleged report he used HGH, he also was inactive during this past Monday night’s game against Cincinnati.  He is showing some improvement and could be back on the practice field by the middle of this week.  His status for the season finale is up in the air, but with a division title and home playoff game at stake it will be interesting to see what direction Denver goes in if they have to choose between Manning and Osweiler.  Check back later this week for updates.

With Jonathan Stewart out, Whittaker got the start in Week 16 against Atlanta but suffered a high ankle sprain.  He will miss the season finale against Tampa Bay in the hopes of being back in time for the playoffs.  Stewart is still dealing with his foot injury so there is no indication yet whether he will return for Week 17.  It appears that Cameron Artis-Payne is the primary option to start next week and get a bulk of the carries as the Panthers look to lock up the No. 1 seed and home field throughout the playoffs.

McCarron injured his wrist when he tried to recover a fumble in Monday night’s overtime loss to the Broncos.  He is scheduled to have an MRI on Tuesday so we will know more about the severity of the injury after this.  Andy Dalton is still out with a thumb injury, so quarterback duties would fall to Keith Wenning.  This does not bode well for the Bengals if their chances at a first round bye and a potential playoff win are in Wenning’s hands.  This is another situation where the quarterback choice has a domino effect on the rest of the team’s players’ fantasy values, so be wary of Bengals skill players.

Maxwell has been a disaster since arriving in Philadelphia and it appears his season is over as he is expected to be placed on injured reserve.  He likely would have been torched by Odell Beckham in Week 17 so this could be a blessing in disguise.

Green was officially placed on injured reserve with an ankle injury that will require surgery.  He never asserted himself when Antonio Gates was out so it was a disappointing season for him in terms of prospective fantasy value heading into this season.  He has talent so perhaps a change of scenery next year after he recovers will be best suited for him.