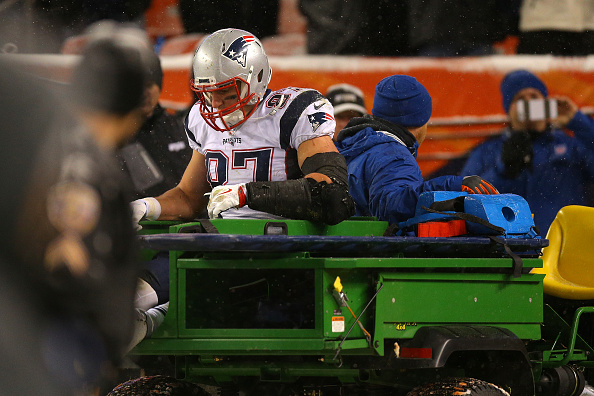 Thanksgiving is now in the rearview mirror and we are about to turn the calendar to December.  The NFL season always seems to go by way too fast, and this year was no exception.  However, many fantasy players’ seasons have come to a screeching halt with some of the injuries that have taken place as we approach the playoffs.  Once again, there are critical players on this edition of the injury report leaving many GMs scrambling with little time to spare.  So without further ado, here is the latest edition of the fantasy football walking wounded.

If you saw the play unfold on TV, you would have thought Rob Gronkowski tore his MCL in his right knee and was done for the season.  However, initial reports are that the injury is not as serious as it looked or compared to the amount of pain he was in.  We won’t know more for a few days, especially with how secretive the Patriots are about injury information.  For now it is a safe bet that Gronkowski will miss Week 13, but don’t rule him out for the rest of the season just yet.  Scott Chandler is a solid waiver wire acquisition to have as a handcuff.

Roethlisberger reported symptoms of a concussion during the Steelers’ game against Seattle, but reports have indicated that the symptoms subsided already.  It appears that he will be quickly cleared from the league’s concussion protocol and should have no issues starting next week against Indianapolis.  Roethlisberger is a must-start elite quarterback despite his various injuries this season.  He lit up Seattle’s defense last week so he should not have any problem doing the same to a significantly worse Indianapolis defense.

Continuing the trend of catastrophic injuries to tight ends, Jimmy Graham’s season is over as he tore his right patellar tendon in Seattle’s game against Pittsburgh.  This is the same injury that Victor Cruz sustained in 2014 and he never made it back on the field since then.  Graham will require surgery and will be a major question mark heading into 2016.  He was having an awful fantasy season anyway with the Seahawks, but nonetheless, this injury will have a major impact on fantasy rosters heading into the playoffs.  Look for Luke Wilson to take over for Graham in the starting lineup.

Hyde missed another game for the 49ers as he continues suffering from a foot injury.  He hasn’t practiced and we have no time frame for his potential return.  San Francisco has had a miserable season with little to play for at this point, so do not be surprised if they shut Hyde down the rest of the way to protect him from any further injury.  Shaun Draughn should get a majority of the carries while Hyde is out, so he could be a viable pickup to add depth heading into your league’s playoffs.

Amendola was ruled out of this week’s game against Denver as he recovers from a knee injury.  He was going to be taking Julian Edelman’s place which increased his fantasy value, but we all know what kind of lengthy injury history Amendola has.  This should not come as a surprise to anyone, so tread lightly before relying too heavily on the oft-injured Amendola.  He should be back for Week 13 and could have an even bigger role now that Rob Gronkowski is injured as well.

Miller suffered a rib injury during Pittsburgh’s game against Seattle and was taken out.  It’s been a down year for him statistically thanks in large part to the myriad of injuries to the Steelers’ quarterbacks.  However, with the significant injuries to Gronkowski and Graham, it could be an opportunity for Miller’s value to increase with Roethlisberger back under center.

Matthews left Sunday’s game against the Jets with injuries to his ribs and chest.  He had been sick during the week so it is unknown if this was related or not.  Matthews has seen his production diminish severely the past couple weeks as the Dolphins have struggled mightily.  He is a WR3 or Flex option in deep leagues, but otherwise he should not be in your lineups come playoff time.

Revis was not cleared to play this week against Miami as he was dealing with concussion symptoms.  As of now, his status for Week 13 is up in the air but I would expect him to play.  Revis will have the opportunity to defend against Odell Beckham in what could be one of the most fascinating wide receiver vs. cornerback matchups in quite some time.  Revis loves proving how good he is, so you should fully expect him back on the field next Sunday in the Battle of New Jersey.

Carroll suffered a broken ankle during the Eagles embarrassing loss to Detroit on Thanksgiving.  He has been placed on season-ending Injured Reserve which will likely bring an end to his tenure in Philadelphia.  Carroll played reasonably well for a disastrous Eagles’ secondary which has been lit up like a Christmas tree the past few weeks.  Carroll wasn’t much of an IDP option, but wide receivers lining up against Philadelphia will now have even better matchups to go against.