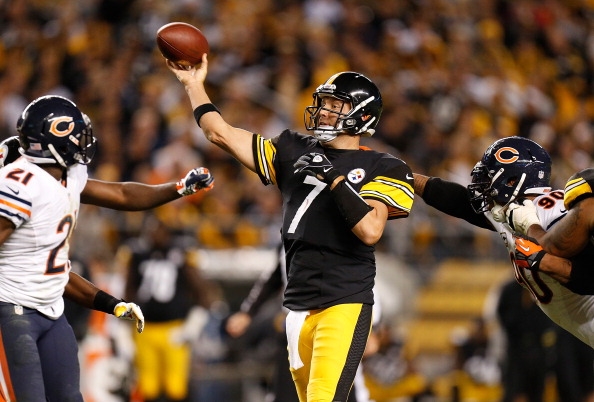 It sounds like a broken record, but once again elite players are dealing with injuries that are wreaking havoc on fantasy owners.  The only saving grace to this injury madness is that every fantasy player is equally susceptible.  You will need to manage the waiver wire effectively and intelligently, and you will also have to proceed with caution before making any impulsive trades.  There will be a ton of medical information coming out this week updating the status of many of these players, so make sure you are well informed before doing anything drastic.  So without further adieu, here is the next edition of the gridiron walking wounded.

Fantasy football players collectively gasped at the sight of Ben Roethlisberger being carted off the field with a knee injury.  The initial reports are that he sustained an MCL sprain and bone bruise which would only cost Roethlisberger four to six weeks.  That seems awfully optimistic at this point but we will know more once the results of an MRI are disclosed.  Michael Vick steps in to replace Big Ben which diminishes the value of Pittsburgh’s wide receivers but also puts a greater emphasis on Le’veon Bell.

Lynch was dealing with a hamstring injury coming into this week’s game against the Bears and was questionable heading towards game time.  He missed the beginning of the game before carrying the ball five times and then sitting out the rest of the day.  Seattle is downplaying the severity of Lynch’s injury and likely figured they didn’t need him on the field to defeat Chicago who was undermanned with Jimmy Clausen playing quarterback.  Follow Lynch’s status during the week to see if he will be ready to go against Detroit in Week 4.

Shockingly the Eagles deactivated Murray shortly before kickoff against the Jets on Sunday.  All indications were that Murray would not only play, but that he wouldn’t be limited in any capacity.  Clearly he suffered some sort of setback over the weekend because the Eagles need to get him on track.  They didn’t miss a beat though with Ryan Mathews running for over 100 yards in his absence.  Check back in during the week and monitor Murray’s status for Week 4 against Washington.

There have been conflicting reports about how much time Bryant would miss after undergoing surgery to repair his fractured foot.  Bryant also had a bone graft performed which will apparently reduce his recovery time and it is now being reported that he could be back within only a few weeks.  This is huge because fantasy owners cannot replace his production and it would be a critical mistake to trade him away at a significant discount.

It was a little too good to be true to think Foster would be back by Week 3.  He says he feels great but that he is not 100% yet.  There is a chance he could be back for Week 4 so monitor his status during the week.  It will be a big boost for fantasy owners who have stashed him all season to be a RB2 with elite potential.

Brees was inactive for this week’s game against the Panthers and could also miss Week 4 as well.  Brees has a sprained rotator cuff in his right shoulder which doesn’t bode well for his ability to come back by next week.  This is very damaging for fantasy owners who have any players on New Orleans.  The Saints have been a disaster thus far and their skill position players have all been a major disappointment.  If for some reason Brees is able to come back he will have a favorable matchup next Sunday night against Dallas.

Decker had returned to practice in a limited capacity late in the week and the Jets were hopeful that he would suit up against Philadelphia.  However, his knee injury hadn’t healed enough so the Jets kept him inactive for Week 3.  This was a costly scratch because the Jets were also without Chris Ivory and most of the Eagles’ attention was paid to Brandon Marshall.  Decker should be back for Week 4 and will have a favorable matchup against a beaten up Miami defense.

Watkins suffered a calf injury in the first half of Buffalo’s game against Miami this week.  He did not return in the second half but that could possibly be because the Bills were dominating the Dolphins anyway.  Watkins is a viable fantasy option playing in a surprisingly effective Buffalo offense.  Check back in for updates during the week and certainly put Watkins in your lineup if he is set to play against the Giants.