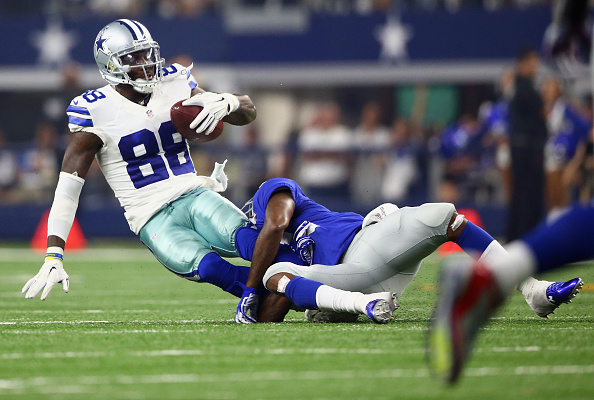 It did not take long before catastrophic injuries wreaked havoc on fantasy owners.  The first NFL Sunday of the year brought a lot of excitement and some standout performances.  But much like every week of the season, injuries dominate the headlines and this one was no different.  So without further adieu, here is the next edition of the gridiron walking wounded.

Bryant left Sunday night’s game in the fourth quarter of the Cowboys’ comeback win over the Giants with a foot injury.  Reports after the game confirmed that the elite wide receiver suffered a broken bone in his foot and will undergo surgery which will sideline him between four to six weeks.  This is obviously a devastating blow to fantasy owners who should now lean on Terrance Williams and Cole Beasley to see increased targets.

Hilton sustained a knee injury which knocked him out of the Colts’ game against Buffalo on Sunday.  He will undergo an MRI which should tell us more about the extent of the injury, but you can expect him to miss at least a couple weeks.  This elevates Donte Moncrief’s value as he becomes Andrew Luck’s number two wide receiver.  Stash Hilton on your bench and hope he comes back sooner rather than later.

Ellington suffered a PCL injury which will likely sideline him for at least a few weeks.  He was coming back from an injury-marred season last year and is now out again.  You should stash him for now if you have roster space and seek out David Johnson on the waiver wire if you are desperate for a replacement because he showed explosiveness on his 4th quarter touchdown catch.

Jackson left Sunday’s game against Miami with a hamstring injury.  The extent of the injury is not know yet as he will undergo an MRI.  However, it is reasonable to expect him to miss at least a week since hamstring injuries typically take time to heal.  He was only targeted once before the injury so expect Pierre Garcon and Jordan Reed to play more prominent roles in the Redskins’ passing game.

Second-year quarterback Derek Carr suffered an injury to his throwing hand and left Oakland’s game against Cincinnati.  X-rays came back negative which is good news but we won’t know more about his Week 2 status for a couple days.

Kuechly sustained a concussion during the Panthers’ game against Jacksonville.  He is one of the best IDP players in the league and will now have to go through the league’s concussion protocol.  His status for Week 2 is up in the air right now so check back in later in the week to see if he has been cleared.

Veteran linebacker Terrell Suggs will miss the remainder of the season after tearing his Achilles tendon.  Suggs is still a solid pass rusher but he can now be dropped from all IDP leagues.

Walker caught one of Marcus Mariota’s four touchdowns and was a sneaky fantasy option heading into the season.  However, he was seen wearing a cast on his hand after injuring it during the game.  Check back later this week for an update on his status.

Cromartie left Sunday’s win against Cleveland with a knee injury he suffered on a non-contact play.  It looked like a serious injury from what we saw, but Cromartie will undergo further tests to determine the extent of the injury.  He is a solid IDP player with his propensity for interceptions, so monitor his status and be prepared to lose him for a significant amount of time.