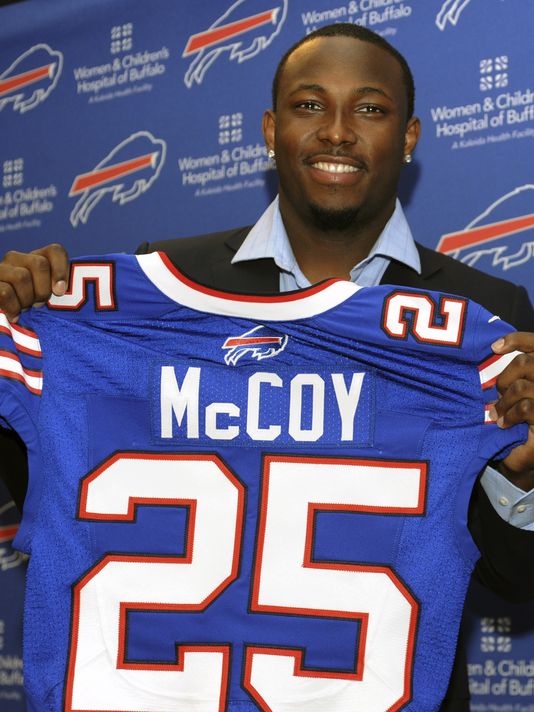 Finally, the preseason is over and we will have real football to watch in less than one week.  The preseason is a nauseating time of year for fantasy owners because players are constantly getting injured in practice, starters barely play in games so it is difficult to evaluate them, and the brand of football being played is horrendous because the clerk at your local grocery store is suited up as a linebacker.  But the regular season kicks off in just six days and Tom Brady will be on the field in all his glory after Judge Berman basically took a dump all over Roger Goodell and the NFL.  So without further adieu, here is the next edition of the gridiron walking wounded.

There is a reason that LeSean McCoy has slipped down draft boards so dramatically this past week.  McCoy is dealing with a slightly torn hamstring and has not done much in practice for a few weeks now.  The Bills seem doubtful that he will be ready for Week 1 which is not good news.  Buffalo just recently released veteran Fred Jackson, so if McCoy can’t go then look for the unimpressive trio of Bryce Brown, Karlos Williams and Anthony Dixon to share carries.  McCoy should be back soon, but there is significant concern over his long-term health since hamstring tears heal slowly and are easily re-aggravated.

Fantasy owners freaked out last week when Randall Cobb left the Packers’ preseason game with a shoulder injury.  They were already dealing with the loss of Jordy Nelson, so an injury to Cobb could have been catastrophic from a fantasy football perspective.  However, the injury was not as severe as it appeared and he claims he will be ready for Week 1.  There is no reason to doubt that at this point and Cobb should be in for a monster season getting most of Aaron Rodgers’ targets.

Colts wide receiver T.Y. Hilton suffered a concussion last week but he has been cleared after undergoing all of the protocol tests and examinations.  He will be ready to suit up for Week 1 and should have a big year as Andrew Luck’s top wide receiver.  Play him as your WR1 or WR2 with confidence and look for more consistent production on a weekly basis as opposed to the streakiness we saw in 2014.

Kelce is one of the better options at tight end and could be in for a big sophomore season after the Chiefs upgraded at wide receiver with the addition of Jeremy Maclin.  Kelce suffered an ankle injury early last week but is expected to be ready to play for Week 1.  He is one of the more athletic tight ends available and could surpass 80 receptions and 1,000 yards receiving this year.

Cruz has been attempting to come back from a serious knee injury but he has dealt with a separate injury to his calf for most of the preseason.  His status is in serious doubt for Week 1 as the Giants do not expect him to play.  If healthy, Cruz could be a decent sleeper option this year now that Odell Beckham, Jr. emerged as their primary wide receiver.  Stash Cruz on your bench and see where he is at after a couple weeks before giving up on him.

The fact that Perriman is still not practicing pretty much assures us that he will not be playing in Week 1.  The Ravens’ rookie is still dealing with a knee injury that has prevented him from doing much at all during training camp and preseason.  Baltimore was looking at him to complement Steve Smith and would have been a solid fantasy option.  However, you should stash him on your roster for now and hope he is back on the field within a couple weeks.

Thomas’ fantasy value took a major nosedive when he signed as a free agent with the Jaguars.  It was no surprise that he was a questionable draft pick and would be more suited as a backup tight end than a starter on a fantasy roster.  However, he will now miss up to a month after undergoing surgery on his injured finger.

Second year tight end Jace Amaro was put on Injured Reserve after suffering a torn labrum earlier in preseason.  He will miss the entire year which means the Jets will have to go with the likes of Jeff Cumberland and Kellen Davis at the position.  Amaro had a disappointing rookie season and figured to be more involved in the offense this year, but now you should absolutely stay away from his replacements for your fantasy teams.