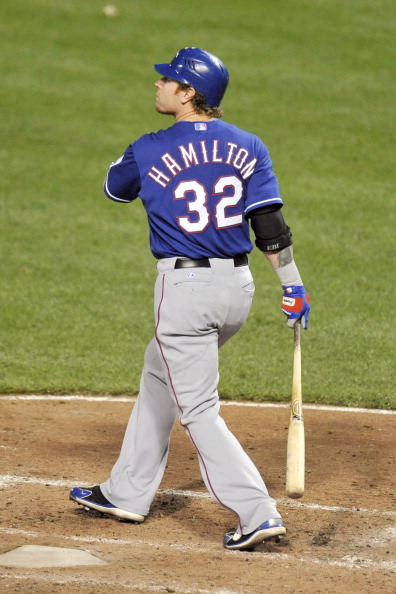 This is the time of year to really evaluate your team and start making moves towards either pursuing a championship or rebuilding for the future.  Part and parcel to your success has likely been your ability to overcome injuries.  This week has been no different than any other week producing its fair share of injury angst.    So without further adieu, here is the next installment of the walking wounded.

It did not take very long for Josh Hamilton to confirm his status as fantasy irrelevant.  It was a nice story of him going back to Texas and making another comeback, but the oft troubled and injured Hamilton suffered a Grade 2 hamstring strain.  You can expect him to miss at least a month and possibly more.  Only stash him if you have sufficient DL slots or a deep bench because he is not worth clogging up your roster when there are likely better options available.

Blue Jays slugger Edwin Encarnacion has been dealing with a hamstring injury this week which has limited him to a pinch-hitting role the past few days.  He is one of the most prolific power hitters in baseball and does have 12 home runs, but his .216 batting average and .740 OPS have been immensely disappointing.  If he is unable to return to the lineup over the weekend a trip to the DL could be warranted.

Yankees catcher Brian McCann was taken out of Wednesday’s game against Seattle with soreness in his foot.  The good news is that both an MRI and CT-scan did not show any structural damage.  He is considered day-to-day so be sure to check for updates on his status as we get closer to game time.

Puig is starting a rehab assignment which means his return is on the horizon.  He has already had setbacks earlier in the year, so hopefully he can make it through the rehab assignment without re-aggravating his hamstring injury.  Puig is overrated in terms of his fantasy value, but he will provide a boost to your lineup upon his return.

The Cuban strikeout machine suffered an ankle sprain earlier in the week and was placed on the disabled list.  The Cubs anticipate that Soler will return when he first becomes eligible as they made the move once it became apparent he would miss more than just a couple games.  Soler has been very streaky and has not shown much plate discipline, but he is still worth holding on to for the next two weeks.

Vogt has been a pleasant surprise as a productive fantasy catcher who also plays other positions to remain in the lineup regularly.  His .308 batting average with 11 home runs and 39 RBI makes him a must-start in any fantasy format.  He suffered a cramp in his right leg on Thursday and was taken out of the game.  Right now it seems that this is not a major injury, but you should monitor his status to see if he is able to return on Friday.

Byrd was hit by a pitch and suffered a fractured wrist landing him on the DL.  It is unknown exactly how long he will be out, but you can expect it to be several weeks.  Byrd had finally found his power stroke but has been an albatross with batting average.  Stash him on your bench if you have sufficient DL slots because he is a good source for power.

The Reds have handled several injuries very poorly this season, but this might actually be the worst.  Mesoraco has missed most of the season with a hip injury that has prevented him from being able to squat behind the plate.  After several weeks of delay, they finally placed him on the DL last week.  Rather than shut Mesoraco down and get his hip surgically repaired, the Reds are going to start working him out in the outfield.  This has disaster written all over it.  It sounds great to have your starting fantasy catcher playing at a different position, but I have a feeling this will not end well for Mesoraco or fantasy GM’s.

Bradley was placed on the DL with a shoulder injury after a sub-par outing against the Braves earlier this week.  An MRI did not reveal any structural damage and he is expected to rest for a few days.  Bradley should not miss more than a couple starts which might actually improve your position in the standings.

Murphy left Thursday night's game with tightness in his quadriceps.  The Mets cannot afford to lose Murphy at this point as he has been red hot hitting cleanup.  However, a stint on the disabled list is a distinct possibility which is problematic for fantasy GM's who have benefited from his eligibility at multiple infield positions.  Plan to be without him through the weekend in a best case scenario, but also plan for an extended absence and seek alternatives on the waiver wire.  This could finally be an opportunity for Matt Reynolds to get called up to the big leagues.