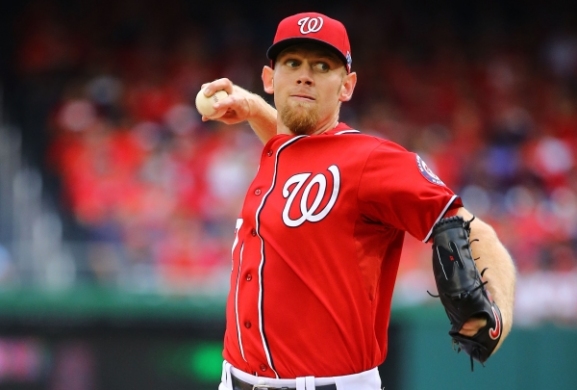 The calendar has turned to June which is the perfect time to seriously take stock of your roster.  Week after week injuries are wreaking havoc on fantasy GM’s, and this week was no different.  Significant decisions need to be made for Week 9 so use your FAAB dollars wisely.  So without further adieu, here is the next installment of the walking wounded.

Hard times have fallen on Stephen Strasburg who was placed on the disabled list with tightness in his neck.  He was removed from his last start in the second inning but the injury does not appear to be serious enough keep him out much longer than the requisite 15 days.  Strasburg is only 3-5 with an abysmal 6.55 ERA and 1.72 WHIP, but clearly he should be stashed on your bench or DL in the hopes he will rebound upon his return.

Jones has been one of the most consistently durable and productive players over the past five years averaging over 150 games per season.  But Jones has missed the past couple games with an ankle injury that is not regarded as serious at this point.  An MRI did not reveal any structural damage so he should be able to avoid a stint on the DL.

The reigning AL Rookie of the Year has been out since Friday with an injury to his right index finger.  Right now the hope is that he will return to the lineup on Tuesday as the White Sox have an off day on Monday.  Abreu has followed up his tremendous rookie season with a solid .282 batting average and eight home runs thus far.  The finger injury does not appear serious at this point but there has to be some concern whether it could linger and affect his ability to swing the bat.

Third base has become a vacuous hole in fantasy baseball over the past couple years, and that hole just got more vacuous now that Adrian Beltre is headed to the disabled list.  Beltre sprained his left thumb which will cost him at least a couple weeks.  Despite only hitting .255 with six home runs before the injury, he is still one of the most dependable and consistent third basemen in the league.  It’s not clear who the Rangers will use at third base going forward, but you will need to scour the waiver wire for a replacement over the next couple weeks.

Cueto has been out for the past couple weeks due to elbow inflammation, but he is set to return this Tuesday against the Phillies.  This is a big deal for fantasy GM’s who likely drafted Cueto as an ace of their pitching staff and have not gotten much return on their investment.  This should serve as a great elixir for Cueto because the Phillies’ offense is putrid and was just dominated by the Rockies over the weekend.

Doolittle finally made his season debut this past week, but he has landed right back on the disabled list with inflammation in his shoulder.  An MRI did not reveal any structural damage, but Doolittle will likely be out for quite awhile.  This means that Tyler Clippard will remain the A’s closer for the foreseeable future.

Peralta was hit on his finger when attempting to bunt on Sunday and was removed from the game.  The x-rays came back negative so it is good news that he didn’t fracture any bones.  Peralta has been worth rostering with five home runs and 24 RBI playing every day for the Diamondbacks.  He will likely miss a game or two depending on any swelling or pain in his finger.

Davis was placed on the DL and is scheduled to undergo surgery next week on his torn right meniscus.  He will likely have an extended absence and should only be stashed in deep leagues with sufficient DL slots.

Heathcott was called up recently when the Yankees placed Jacoby Ellsbury on the DL with a knee injury.  Now Heathcott has landed on the DL with a Grade 2 quadriceps strain.  Heathcott was on his way to becoming a possible fantasy option after going six for his first 17, but now you can save your FAAB money and spend it elsewhere.