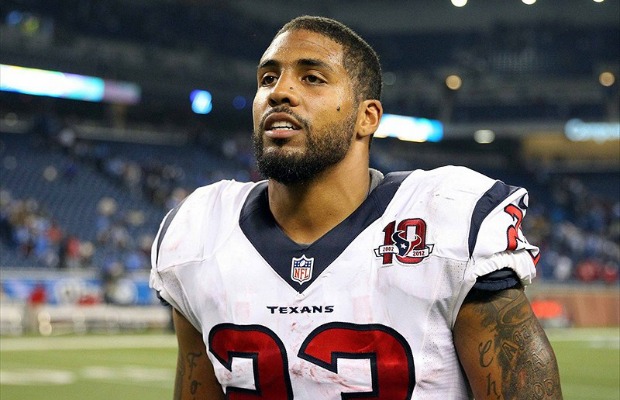 Welcome to the Thanksgiving edition of the Fantasy Alarm Injury Report.  On behalf of everyone at Fantasy Alarm, I wish you and your families a happy and healthy Thanksgiving holiday.  Speaking of “healthy” there are plenty of NFL players that do not qualify for that title due to various injuries and ailments.  This is now Week 13 of the NFL season which means it is the final week of the regular season for many fantasy football leagues.  With three big games scheduled for Thursday, you need to make quick and decisive decisions in the middle of eating your turkey and green bean casserole.  So without further adieu, here is the Thanksgiving edition of the walking wounded.

Arian Foster has missed the past two games with a groin injury but he returned to practice on Wednesday and appears ready to go this Sunday against the Titans.  Alfred Blue did an admirable job filling in for Foster, but he will take a back seat now.  Foster’s biggest issue has always been staying healthy, so if he plays then certainly plug him in as a RB1.

After making the greatest catch in NFL history last Sunday night, Odell Beckham, Jr. firmly solidified himself as a fantasy stud and one of the best young players in the league.  Later in the game against the Cowboys, he was kneed in the back diving for a ball and had to leave the game.  However, he has practiced in full all week and will be on the field this Sunday in Jacksonville.  He is a great fantasy option this week and should receive well over 10 targets.

Julius Thomas missed last week’s game against Miami with an ankle injury and it has prevented him from practicing through Wednesday this week.  That being said, there is still a chance Thomas could play which would be a big boost to fantasy GM’s.  You will need to closely monitor the situation up to game time, but do not rely upon Jacob Tamme as a suitable replacement if Thomas does not play.

Roddy White is dealing with an ankle injury which has held him out of practice through Thursday.  He is coming off a big game last week where he had nine catches for 96 yards and will be a big part of Atlanta’s passing game.  The Falcons need him to play since they are pitifully in first place in the awful NFC South, so expect White to be out there despite not practicing.

Larry Fitzgerald did not practice on Wednesday as he is still dealing with a Grade 2 MCL sprain.  He did not play last week and is questionable for this week’s game against Atlanta.  Keep checking back in before Sunday because he would have a favorable matchup against a bad Falcons’ defense.  If he cannot play, then make sure Michael Floyd and John Brown are in your lineups.

Eagles’ rookie wide receiver Jordan Matthews is listed as probable for today’s game against Dallas as he is dealing with a knee injury.  He will likely play and should be in your lineups as a WR3 or Flex because he has developed a great rapport with Mark Sanchez.  Matthews has caught four touchdown passes in the past five games and is becoming a dependable fantasy option.

Ryan Mathews is a frequent member of the injury report so it feels like these entries just write themselves.  He is dealing with a shoulder injury which limited his action last week against St. Louis.  He did have a big game rushing 12 times for 105 yards and a touchdown, so perhaps the pendulum is swinging upwards for him.  He will play this week so put him in your lineup as a RB2.  The problem is that he can get injured brushing his teeth in the morning, so be cautious.

Reggie Bush has been officially ruled out for today’s game against Detroit.  His ankle injury has been bothering him for two months and the Lions hope he can come back for next week’s game.  With Bush out, stick Joique Bell in your lineup as a RB2 or Flex.  Bell hasn’t been great either, but the Bears’ defense is awful so he could be in for a solid day.