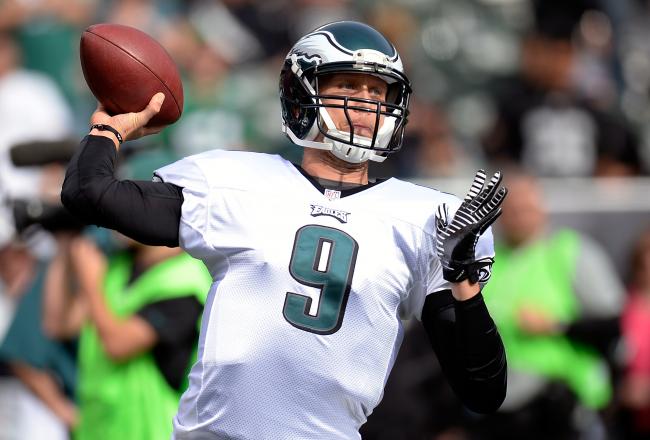 The calendar has officially turned to November and we are already at Week 10 of the season.  The fantasy playoffs are right around the corner so you need to make sure your roster has sufficient depth due to bye weeks and injuries.  So without further adieu, here is the next edition of the walking wounded.

Tony Romo made the trip to London with the Cowboys and did not practice on Wednesday.  He is dealing with two fractures in his back, but there is still a chance that he plays on Sunday against the Jaguars.  Dallas would obviously like him to play over Brandon Weeden, so you need to monitor his status over the next few days before making any decisions in your fantasy lineup.  It is a game that Dallas should win even with Weeden starting, but they will march Romo out there if he is physically capable.

Nick Foles suffered a broken collarbone in last week’s game against Houston.  He got off to a hot start in the game but suffered an injury which will keep him sidelined for approximately six weeks.  Foles has had a rough season throwing the second most interceptions in the league after a season in which he only threw two in 13 games in 2013.  Mark Sanchez will be the starter for the next month and a half, and he is worth taking a flyer on in two-QB leagues.  It will be interesting to see how Sanchez performs on a weekly basis with a lot of offensive weapons at his disposal unlike his tenure with the Jets.

Sammy Watkins injured his groin at practice on Wednesday and underwent an MRI for precautionary reasons.  Fortunately it came back clean and Watkins is expected to be ready to play.  He is coming off a big game two weeks ago against the Jets where he had 157 yards receiving and a touchdown.  Of course he should have had two touchdowns if not for his showboating.  Despite that, he has become a must-start and should be in your lineup without any concern this week.

Giovani Bernard will likely not be ready to play in Thursday night’s game against Cleveland.  He is still dealing with a hip injury, so the short week for Cincinnati will end up costing fantasy GM’s two games from their top running back.  Jeremy Hill will get the start again and he is coming off a huge game in Week 9 where he ran for 154 yards and two touchdowns.  Hill is a must-start against Cleveland’s terrible run defense.

Rashad Jennings did not practice on Wednesday as he is still recovering from his sprained MCL in his knee.  It is unlikely that he will play this week against Seattle which means that Andre Williams would get another start.  The Giants’ offensive line has been awful over the past several weeks and more of the same should be expected against a top Seattle defense.  Jennings is targeting a return in Week 11, so keep him stashed another week.  Williams is only an option to start this week if you need replacements for players on a bye.

Montee Ball has been one of the biggest fantasy busts of the season.  Not only was he highly unproductive over the first five weeks of the season, but he has been out for the last month dealing with a groin injury.  He returned to practice on Wednesday which is a good sign, but he will not be the lead running back for the Broncos.  Ronnie Hillman has played very well over the past few weeks, so Ball’s value has diminished to the point where he is barely worth keeping on your roster.

The good news is that Wes Welker is not on today’s injury report with a concussion.  The bad news is that he took a vicious hit last week against New England and is dealing with a back injury.  He did return to practice on Wednesday which means he will likely play on Sunday.  However, he is so banged up physically that you should not expect much in terms of production from him.  Plus, he is Peyton Manning’s fourth option at best in Denver’s aerial attack.

Charles Sims is expected to make his NFL debut this week against the Falcons.  He has been on short-term injured reserve all season with an ankle injury but was activated last week and did not play.  He should get some decent playing time for a Tampa Bay team that is going nowhere.  Look for him to have the most value in PPR leagues as he is expected to be active in the passing game.

Giants cornerback Prince Amukamara suffered a torn bicep in last Monday night’s loss to the Colts and is out for the season.  This is a devastating blow to the Giants defense but it certainly increases the value of wide receivers on opposing teams.  Amukamara has become one of the better defensive backs in the league, so offenses should be able to have their way with the Giants’ defense thanks to their depleted secondary.

DeMeco Ryans sustained a torn Achilles tendon last week which will end his season.  He suffered the injury in a game where he had six tackles and an interception.  Ryans is a solid option in IDP leagues, so this will be a tough loss for fantasy owners who play in them.  He can be dropped in all non-keeper leagues.