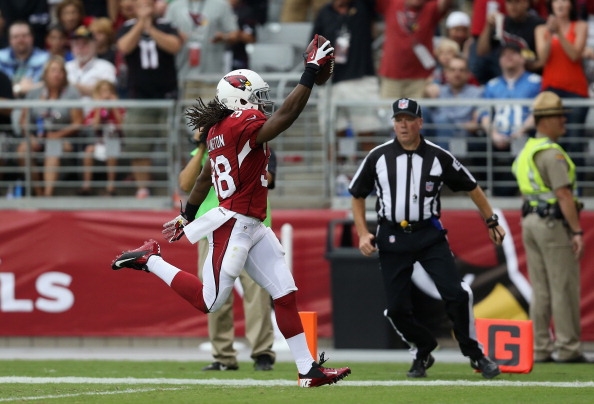 Andre Ellington is not Well-ington and Week 1 lineups have gone to Hell-ington.

The Arizona Cardinals had high expectations coming into 2014, and with good reason.  They finished 10-6 in 2013 and barely missed the playoffs.  A major reason for such optimism in 2014 was the emergence of Andre Ellington as a star running back in the NFL.  His 5.53 yards per carry led all players with at least 100 rushing attempts last season.  His star was also rising in fantasy football as he has been a consensus 2nd or 3rd round pick in most draft formats.  But as we all know too well, injuries can change everything.

Last Thursday, Ellington sustained a foot injury which prompted an MRI and caused him to miss practice.  He also visited a foot specialist and now his status for Monday night’s game against San Diego is all but ruled out.  On top of that, there are reports coming out of Arizona that suspect Ellington could miss up to six weeks.  This would be a devastating blow to fantasy GM’s who were relying on him for significant yardage, several touchdowns, and lots of receptions in PPR leagues.

In his absence, you can expect Jonathan Dwyer and Stepfan Taylor to see most of the action out of the Cardinals’ backfield.  Neither player provides the same explosiveness or productivity as Ellington, a 6th round draft pick out of Clemson in 2013.  But they could be temporary options for you if you need to stash Ellington on the bench for awhile.  This injury could in fact increase the value of Carson Palmer, Larry Fitzgerald and Michael Floyd since it is likely that Arizona will throw the ball more frequently without their starting running back.

This injury is one that Ellington is all too familiar with.  In 2010, he underwent surgery to repair a ligament tear and bone fracture in his foot. Then in 2012, he underwent ankle surgery to clear scar tissue from a previous injury.  So it is unclear whether the injury Ellington sustained this week is new or a re-aggravation of a previous injury.  Either way, it is serious enough that it will likely keep him out of action for an extended period of time.

ADVICE: While he has not been officially ruled out of this Monday night’s game yet, it is a safe bet that he won’t be playing.  You should play it safe and keep him on your bench.  If he is then ruled out for four to six weeks, stash him on your bench because when he returns it will be akin to making a big trade later in the season.  Foot injuries are very tricky, especially for running backs.  Hopefully you drafted enough depth at running back to withstand his loss for awhile.  If not, try and pick up Dwyer or Taylor, or start looking to make a trade.  But be careful because you are ripe for the pickings since you are the one in desperate need of a replacement.