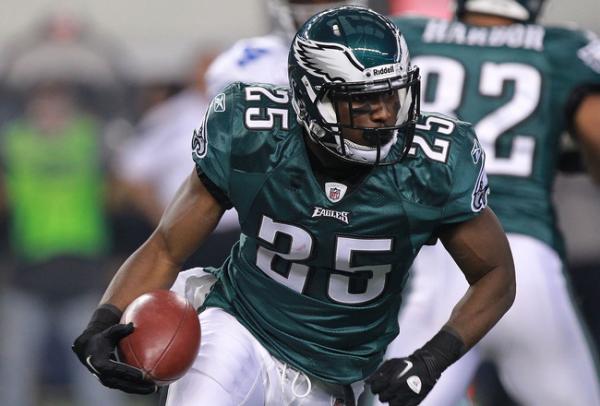 Finally, the preseason has come to an end.  The summer seemed to have flown by, but the preseason seemed to last forever.  After weeks of meaningless games hampered by an over-abundance of yellow flags and defensive penalties, we are finally ready to kick off the 2014 NFL season.  But like every preseason, there are a number of injuries to players that have a lasting effect on both real and fantasy football.  This is why the timing of your drafts is so important.  The later your draft is, the more likely you will have all the information you need about a player’s status before selecting him.  So as we prepare to begin the NFL, let’s take an in depth look at some of the key players who have injuries that could affect your draft strategy and Week 1 lineups.

It is never a good thing for the projected number one overall pick in fantasy football drafts to be dealing with injuries to his thumb and toe.  But LeSean McCoy has been practicing and will be ready to go for the start of the season.  He could be in for an epic season in Chip Kelly’s fast-paced and explosive offense.  If you have the first pick in your draft, especially in a PPR league, you should not hesitate for one second to take McCoy with the top choice.  If the Eagles were concerned at all about his health, they would likely sit him out of practice.  But with a week to go before the season begins, he is out on the field which is a great sign.

You would think that Rob Gronkowski was in the witness protection program because it is impossible to get a straight answer in terms of what his status will be for Week 1.  If I were a betting man (and at times, I am), I would say he will play in the Patriots first game.  But after what we saw last year, we cannot be so sure.  It is interesting that New England just acquired tight end Tim Wright from Tampa Bay in the Logan Mankins trade last week.  The NFL Network reported that this acquisition had nothing to do with Gronkowski’s health status, but I think most of us are smart enough to be skeptical of any news that comes out of New England with respect to injuries.  Gronkowski is still typically getting drafted in rounds 2-4 in many drafts, so there is a growing consensus that believes he is will suit up right away.  No one can ever question his talent, but he needs to stay on the field for 16 games to quiet his naysayers.  Expect to have him in your lineup for Week 1.

Technically Josh Gordon is not injured.  But, he will miss the entire season after his one year suspension was upheld during the appellate process.  It took much longer than expected for a decision to be reached which had a major effect on many fantasy drafts.  GM’s were still drafting Gordon in as early as the 6th or 7th rounds of drafts hoping his suspension would either be overturned or reduced significantly.  Now those GM’s have a gaping hole on their roster with a wasted pick.  Gordon wanted to play the season in the Canadian Football League, but the Browns have wisely refused to allow this.  Gordon has value in keeper leagues as he is still young and was the NFL’s leading receiver in 2013.  But for purposes of redraft leagues in 2014, he has as much value as Browning Nagle.

Incredibly, Wes Welker traveled with the team and was warming up on the field before Denver’s last preseason game.  Those are positive signs that he is on the road to recovery and could possibly be active for Week 1.  He has a ways to go before he is medically cleared given he has sustained three concussions in the past 10 months, but it appears he is on the right track.  It is a dangerous proposition to envision Welker running those routes in the middle of the field which leave him prone for big hits.  But he is obviously one of the toughest players in the league and has no regard for his own well-being.  If he does play, that will have a greater effect on Andre Caldwell and Cory Latimer who were in line to replace Welker.  Emmanuel Sanders should still have a breakout season irrespective of whether Welker plays.  We will know more by the time the Broncos kickoff next Sunday night, so you have some time before having to decide whether to put Welker in your lineup.

If you or I had hairline fractures in several of our ribs, we would be laid up on the couch hoping someone would feed us some chicken noodle soup and re-charge a tens unit.  But none of us are Cam Newton who is dealing with these injuries and yet has all but assured the public that he will be playing in Week 1.  Granted, NFL players play through injuries like this all the time.  But for a physical quarterback who tends to get tackled more than most others, it raises questions about how much pain he can sustain.  The Panthers clearly have limited options in the passing game, so it made sense to expect that Newton would be a big factor rushing the ball as well.  With this injury and Carolina’s desire to prevent any further damage, I would expect a standard running game with the three-headed monster of DeAngelo Williams, Jonathan Stewart and Mike Tolbert.  I would also expect extra blockers for passing downs to try and avoid as many hurries, hits and sacks as possible.

We suspected that Bernard Pierce had a concussion when he left Baltimore’s third preseason game, and sure enough he has been officially diagnosed with such.  It is being reported that it is a “minor” concussion.  I am not a doctor (nor do I play one on TV), but a concussion is a concussion.  He will go through the concussion protocol and should have plenty of time to be ready for the Ravens’ first game.  Remember, he will be starting in place of Ray Rice who is serving a two-game suspension.  Put him in your lineup as either a RB2 or Flex unless he suffers some type of setback between now and Week 1.

There is no sugarcoating this - Kenny Stills injury is a big concern.  He re-aggravated his quad injury during the Saints third preseason game and now his status for Week 1 is in serious jeopardy.  He has missed the first two preseason games with this injury and now has suffered a setback.  He would have been lining up opposite Marques Colston as the Saints number two receiver, but his absence should open the door for dynamic rookie Brandin Cooks to slide right into the starting lineup.  Cooks is someone I have targeted and selected in almost every draft I have done this summer.  He is a must start and could make an immediate impact if he plays in place of Stills.

First round pick Sammy Watkins re-injured his ribs in the Bills’ last preseason game.  However, it is being reported that the injury is more of a re-aggravation than anything else.  He should have enough time heal up and be on the field as one of Buffalo’s starting wide receivers.  Watkins is one of many rookie wideouts receiving a lot of hype, but I would temper my expectations for him because I am not overly confident about E.J. Manuel’s passing skills.  In deeper leagues he is fine as a WR4 or maybe a Flex, but I would recommend waiting and seeing how he performs before committing to him in your starting lineup.

When Marshawn Lynch was holding out for a couple days earlier this summer, there was a lot of hype around Christine Michael as his handcuff and potential replacement.  It seemed as though Michael had overtaken Robert Turbin as the Seahawks’ number two running back and this belief led to Michael’s ADP skyrocketing in drafts throughout the preseason.  However, Michael has had an unproductive preseason and was called out for inconsistency by one of his own coaches.  On top of that, he is also dealing with a hamstring injury.  Lynch will obviously carry most of the load out of Seattle’s backfield, but the thought of Michael being second in line is no longer the popular opinion.  He should be able to suit up for Week 1 despite the injury, but do not expect a lot of playing time for him.

It seems as though the tight end position is deeper than normal for fantasy football leagues.  Of course there are the elite ones like Jimmy Graham, Rob Gronkowski and Julius Thomas.  But if you are patient enough to wait for a tight end, you could end up with someone like Tyler Eifert who is expected to be a big part of the Bengals offense.  With Marvin Jones out for the first four weeks, Eifert has a chance to emerge as one of the better receiving tight ends in the game.  He hasn’t played since the Bengals’ first preseason game with a back injury and was held out of the last game for precautionary reasons.  With the extra rest and time to heal up, he will be ready to go for Cincinnati’s Week 1 game.  He is better suited as a backup tight end, but you could do worse if you punted the position completely until after the 10th round.