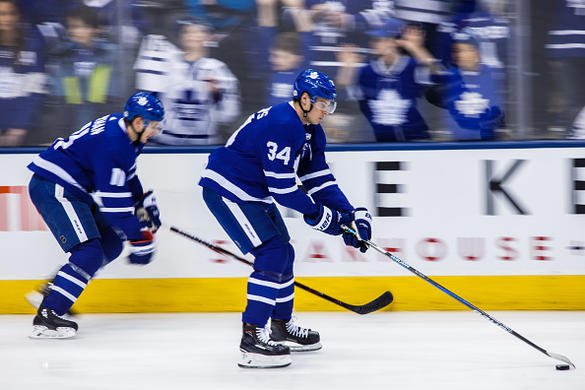 This week, it is a star-studded cast of injuries led by Toronto's franchise center, who has now missed the team's last two games because of his shoulder issue. The 20-year-old is a massive part of the Maple Leafs' long-term future, so the club will likely take every precaution necessary before he returns to action. With Matthews out of the lineup, linemate William Nylander will continue to receive an extended audition at the center position.

Perhaps the biggest reason why Pittsburgh is still one of the top contenders for the Stanley Cup this season, Murray is once again on the sidelines. He missed six games last month due to the death of his father, missed one game in late December due to an upper-body injury and also missed six games earlier that month because of a lower-body issue. The 23-year-old may be the best fantasy player in the game, but his health is a worry.

While there is no official word on Kucherov's injury, it appears as though the Lightning and the NHL's leading scorer may have dodged a major bullet. The Russian sniper left Monday's game versus Toronto because of an upper-body injury, but reports after the game suggest Kucherov might not miss significant time (and may be able to play this week). That rather large sigh of relief heard around the fantasy world was from Kucherov owners. 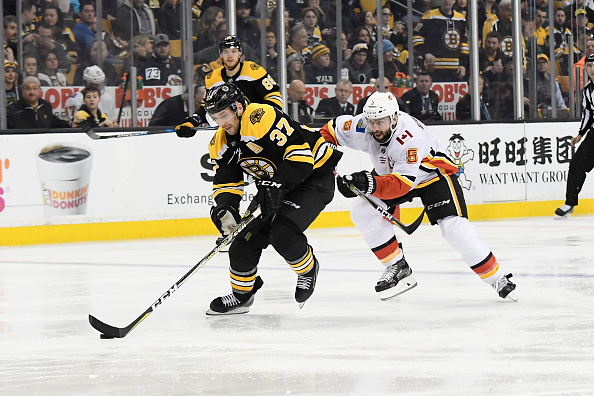 This is a bit of a strange one, as the two-way center injured his foot last Saturday in the road contest at Toronto. Tests on his foot proved negative, so Bergeron was allowed to play the following night in Buffalo. Now, more tests have revealed a slight fracture in his foot, meaning the 32-year-old veteran is expected to miss at least the next two weeks. Third-line center Riley Nash is expected to be promoted to the top line in Bergeron's place.

Despite the fact the 24-year-old Gibson has been placed on Injured Reserve, there is a chance he could return to action later this week. Anaheim is in the middle of four days off before the team's next tilt (at home vs. Columbus), and there is a chance Gibson will be able to dress for that game. Veteran Ryan Miller has been good since taking over for Gibson four games ago, but the Ducks' playoff chances depend largely on Gibson.

The Columbus captain has now missed four games because of a lower-body injury suffered at the hands of the Pittsburgh Penguins earlier this month. That said, the 30-year-old Foligno is making progress and could play during the team's upcoming road trip to California. It has been a down year for Foligno but he might have a strong finish to the 2017-18 campaign. The Blue Jackets will need him in order to squeeze into the playoffs.

This is a blow for the Panthers, especially since the slick Swiss forward was finally establishing himself as a legitimate top-six winger at the National Hockey League level. Malgin was playing right wing alongside Vincent Trocheck and Jonathan Huberdeau on a superb second line. Veteran Radim Vrbata, who was (somewhat surprisingly) NOT traded before the February 26 deadline, is expected to replace Malgin in Florida's lineup.

In what has been a lost season for Montreal virtually from the start of the 2017-18 campaign, Price's latest injury is a concussion that might keep him sidelined for the rest of the regular season. Veteran Antti Niemi and rookie Charlie Lindgren will fill in for Price, possibly sharing the load. Like Pittsburgh's Matt Murray, Price's fantasy stock is hurt only because of the frequency of his injuries. This is simply the latest setback for the All-Star. 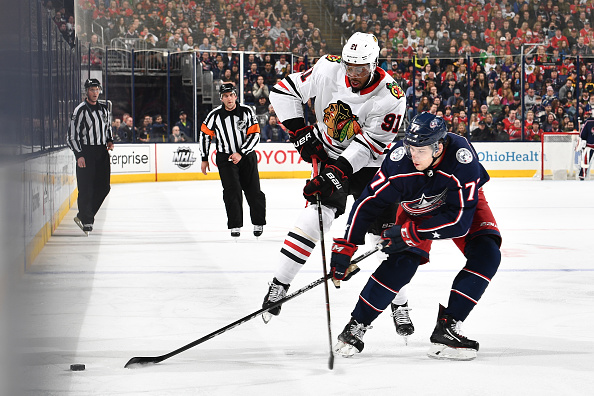 Columbus earned a huge victory over the Washington Capitals on Monday, but it came at a price. The 23-year-old Anderson left the game early because of his lower-body injury, and he might miss some time as a result. Fortunately for the Blue Jackets, they acquired veteran winger Thomas Vanek before the trade deadline and captain Nick Foligno should return soon. That said, Columbus will miss what Anderson brings to the table.

First, Ferland lost his spot at right wing on Calgary's terrific top line alongside Sean Monahan and Johnny Gaudreau. Then Ferland got hurt. Then, the Flames decided to claim winger Chris Stewart off waivers from Minnesota. Stewart is going to be given an audition right away on the Monahan-Gaudreau line. Furthermore, veteran Kris Versteeg may soon be back from injury, as well. Ferland's fantasy value is starting to plummet.

M. Duchene - F
NSH
Matt Duchene admitted that his first season in Nashville had ups and downs.
"Up and down," Duchene said of his season. "We went through a lot of adversity this year, myself included. I think every adverse situation you get put in is a chance to grow and a chance to learn and move forward. ... I love this team, I love this group and I believe in this group. Better days are ahead for sure." The 29-year-old managed to score just 13 goals and 42 points in 66 games with the Preds. They'll need him to produce way more offense if they're going to be serious contenders in the Western Conference in 2021.
Added 12:04 am (EST)
Added 12:04 am (EST)

N. Merkley - F
NJ
Nick Merkley's time in Finland is over as his loan agreement with Assat has expired.
Merkley had four goals and 13 points in 19 games with Assat. Merkley was acquired from Arizona in the Taylor Hall trade and he had a goal and an assist in four games with the Devils. He will have a chance to earn a spot with New Jersey in training camp. Merkley was selected in the first round, 30th overall in 2015 and has yet to make any impact, or even much of a dent, in the NHL.
Added Yesterday 11:13 am (EST)
Added Yesterday 11:13 am (EST)

C. Pickard - G
DET
The Detroit Red Wings have loaned goaltender Calvin Pickard to the Vienna Capitals of the ICEHL.
Pickard will get in some playing time in the Austrian capital before the start of training camp. Pickard is expected to play for Grand Rapids of the AHL which is tentatively set to start action on February 4. Pickard is third in the Detroit pecking order as far as their goaltending depth chart is concerned as Jonathan Bernier and Thomas Greiss are definitely ahead of him. Pickard was 0-2-0 for the lowly Red Wings last season with a 5.46 GAA and a .767 save percentage. He was better in the AHL with a 17-12-4 mark to go with a 2.86 GAA and a .903 save percentage.
Added Yesterday 10:48 am (EST)
Added Yesterday 10:48 am (EST)

G. Sparks - G
VGK
The Orlando Solar Bears of the ECHL have signed goaltender Garret Sparks to a one-year deal.
It's a homecoming of sorts for Sparks who played for Orlando from 2013-16 when it was the Maple Leafs ECHL farm team. Sparks was selected in the seventh round of the 2011 Draft and has played 38 games at the NHL level, 37 with Toronto and one last season with Vegas. He is 14-18-2 with a 3.11 GAA and a .897 save percentage in his NHL career and likely will be the starter for Orlando when play begins on December 11.
Added Yesterday 10:21 am (EST)
Added Yesterday 10:21 am (EST)

D. Stephens - D
BUF
The Syracuse Crunch have sent defenseman Devante Stephens and three others to Orlando of the ECHL.
The ECHL is starting its season on December 11 with a partial schedule as eight teams have suspended operations for a year due to the pandemic and five other teams are waiting until January 2021 to start play. That leaves 13 teams ready to go.  Clint Windsor, Nikita Pavlychev and Peter Abbandonato are also heading down to get in some extra playing time. Stephens is entering his fourth professional season as he played for Syracuse and Cincinnati last season. He had six assists in 38 AHL games in 2019-20.
Added Yesterday 8:33 am (EST)
Added Yesterday 8:33 am (EST)

D. Larkin - F
DET
The Detroit Red Wings practiced on Little Caesars Arena ice Monday for the first time in almost nine months.
A bunch of players who are in the Detroit area including Anthony Mantha and Dylan Larkin went onto their home ice and had a skate. The Red Wings were the worst team in the NHL last season and as a result, did not participate in the NHL 's Return to Play so the last time the team was on Little Caesar's ice was March 11, the day before the NHL shut down. It looks like the NHL is starting to gear up to return to action.
Added Yesterday 8:24 am (EST)
Added Yesterday 8:24 am (EST)

Z. Bogosian - D
TOR
Toronto GM Kyle Dubas believes the Maple Leafs could use seven blueliners at times during games in 2020-21.
"The depth of our D would lend itself to this and I wouldn't be surprised to see us use it from time to time," Dubas said on Saturday. He mentioned that Zach Bogosian's penalty kill ability and Mikko Lehtonen's power-play skills could become factors in this decision, but it will ultimately to be up to coach Sheldon Keefe if it's implemented. Dressing seven defensemen in games could also provide Toronto's star forwards with more ice time during even-strength situations.
Added Nov 30 4:51 pm (EST)
Added Nov 30 4:51 pm (EST)