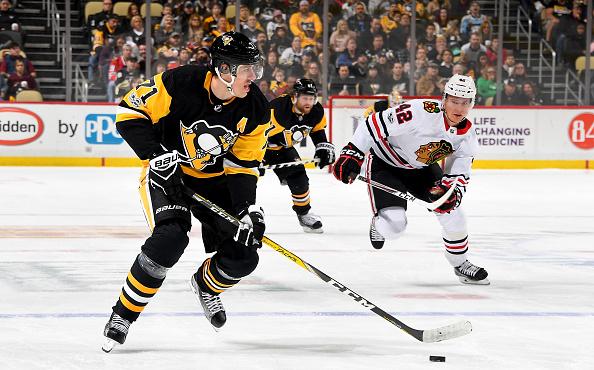 The Penguins' superstar has now missed four straight games due to his upper-body ailment. However, there is a chance he may be back this weekend. In the meantime, captain Sidney Crosby has stepped up his game during Malkin's absence and Riley Sheahan has taken over second-line center duties. Sheahan has produced two assists in his last four games. His fantasy stock may all but disappear once Malkin returns to the lineup.

Anaheim continues to be ravaged by injuries this season, with versatile Swede Rakell the latest in a long line of Ducks players to go on the shelf. Rakell had been producing very good numbers (22 GP, 8-10-18) so far in 2017-18, while playing both left wing and center for the team. Rakell might not miss too much more time, so his fantasy value should remain intact (especially due to his position versatility). Pick Rakell up, if still available. 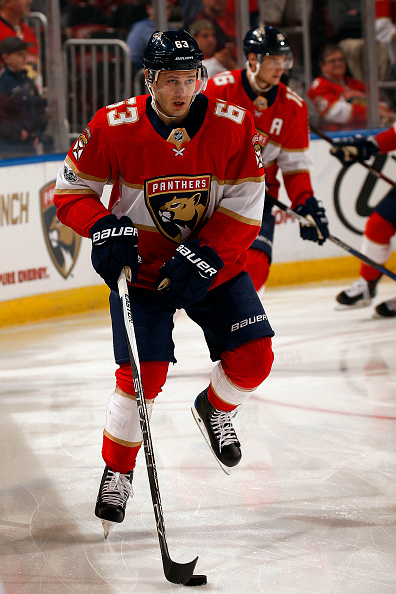 The Panthers' new top-line right-winger this season (replacing Jaromir Jagr), Dadonov's return to the NHL from the KHL had been a big positive for Florida. In fact, the skilled Russian was on pace for a career-high 67 points. With Dadonov out, skilled Swiss forward Denis Malgin was recalled from the AHL and immediately placed on Florida's No. 1 line alongside Aleksander Barkov and Jonathan Huberdeau. Malgin is worth picking up.

One of the main reasons why Vegas has been so successful in the early stages of the franchise's existence has been the balanced lineup. Losing Perron could put a damper on their scoring prowess for the next few games, though it does provide Brendan Leipsic an opportunity to move up in the lineup to play with Erik Haula and sniper James Neal. Leipsic could be an interesting, short-term solution for fantasy leaguers in need.

If Mason had not yet lost the Jets' No. 1 goaltending job to Connor Hellebuyck officially, this ill-timed injury could put a nail in that coffin (at least for the rest of 2017-18). Mason's numbers so far in his first season in Winnipeg have been rather forgettable (8 GP, 2-4-1, 3.45 GAA, .904 Sv%), which further cements Hellebuyck's status. Rookie Eric Comrie has been recalled and could now be worth a look in very deep fantasy leagues.

This is not a repeat, but Raanta is once again on the shelf due to injury. Earlier in the campaign, the Finnish netminder had missed nine games due to a lower-body issue. Now, Raanta is reportedly out due to an upper-body ailment. This is now a golden opportunity for former Devils prospect Scott Wedgewood, who should earn most of the starts while Raanta is absent. Wedgewood should be owned in virtually all league formats.

The veteran playmaker had recently been demoted to the fourth line, so his absence may not seem like a big deal to fantasy leaguers. However, Versteeg was part of Calgary's No. 1 power-play unit (with Johnny Gaudreau, Sean Monahan, Micheal Ferland and T.J. Brodie), so he should continue to display decent value upon his return (even if he continues to skate on the fourth line). Mark Giordano has replaced him on the power play. 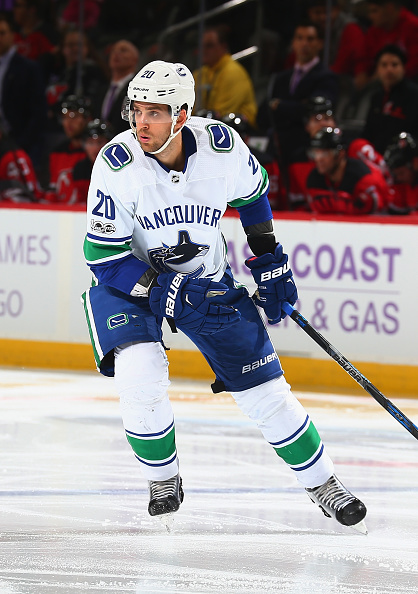 While Sutter is not a big point producer, he had been seeing loads of ice time for the Canucks this season. In fact, only fellow center Bo Horvat has averaged more minutes among Vancouver forwards in 2017-18. To fill Sutter's shoes during his absence, veteran center Henrik Sedin could see a lot more ice time (which may also lead to a lot more production from the veteran Swedish captain). Sutter's injury has a trickle-down effect.

New York's captain and No. 1 defenseman was on pace to set a new career mark in points before going down to injury--despite not scoring a goal yet in 2017-18. Surprisingly, the Blueshirts have won all three games since McDonagh was injured. That said, the club would rather not tempt fate and have him miss too many more contests. Nick Holden has seen his ice time rise above the 21-minute mark twice in the last three contests.

After being selected in the 2017 Expansion Draft by Vegas, then shipped to Montreal via trade, then on the shelf for over one month due to his pesky hand injury, plus two conditioning assignments in the AHL, Schlemko is FINALLY ready to get his 2017-18 campaign going. While he might be brought back slowly, Schlemko seems destined to eventually wind up partnering Shea Weber on Montreal's top pairing. Keep an eye on Schlemko.

J. Allen - G
STL
Jake Allen has been taking part in skates with some teammates during Phase 2 of the NHL Return to Play Plan.
"I feel a lot better than I thought (I would)," Allen said. "I've been prepping and doing some specific stuff to make sure this transition (back to playing) hasn't been that hard. As time has gone on, I've realized what I need to do to keep my body ready to rock. We knew it was going to be a short training camp. You're jumping right into it and games are right away." He believes the Blues stand a good chance to repeat as champions. Allen served as the backup goaltender during the team's run to Stanley Cup last year behind Jordan Binnington.
Added 5:22 pm (EST)
Added 5:22 pm (EST)

V. Mete - D
MTL
Victor Mete (foot) was on the ice Tuesday for a Phase 2 session with some Montreal teammates.
Mete was on the ice with the third group of the day. He missed nine games with a fractured foot prior to the pause of the 2019-20 season due to concerns brought on by the coronavirus. Training camps are set to open on Monday and it seems as though Mete will be able to participate.
Added 3:05 pm (EST)
Added 3:05 pm (EST)

N. Backstrom - F
WSH
Nicklas Backstrom skated for the first time on Monday since Phase 2 of the NHL Return to Play Plan started.
The Capitals have about 15 players, which are separated into two group, skating at the team practice facility. Training camps are scheduled to begin on Monday, as the league prepares to get going again to move towards awarding the 2020 Stanley Cup.
Added 2:02 pm (EST)
Added 2:02 pm (EST)

K. Thompson - D
ANA
Keaton Thompson has re-upped with the AHL's Iowa Wild on a one-year deal for the 2020-21 season.
Thompson recorded two goals and 14 points in 45 games with Iowa during the 2019-20 campaign. The 24-year-old blueliner doesn't have any experience at the NHL level as of yet. The Anaheim Ducks originally selected Thompson in the third round, 87th overall in the 2013 NHL Entry Draft.
Added 12:52 pm (EST)
Added 12:52 pm (EST)

M. Murray - G
PIT
There's a good chance that Matt Murray will be the Penguins starter in Game 1 of the qualifying round.
The decision won't be an easy one for the Penguins given how well Tristan Jarry did in the regular season, but Murray's playoff experience might ultimately convince Pittsburgh to give him a shot. “Goaltending, it’s still between the ears. And this is a guy that’s won two Stanley Cups,” said Corey Hirsch, who is a former goaltender with 108 NHL games on his resume and now works for Sportsnet. That said, even if Murray gets the start in Game 1, the situation is likely to remain fluid. If he struggles, Penguins coach Mike Sullivan will know he has a strong alternative in Jarry and that might lead to Murray having a quicker hook.
Added 9:58 am (EST)
Added 9:58 am (EST)

S. Laughton - F
PHI
Scott Laughton earned the Flyers' 2019-20 Yanick Dupre Class Guy Award.
Yanick Dupre Class Guy Award is handed out to a member of the Flyers by the Philadelphia chapter of the Professional Hockey Writers Association. It honors a player who is deemed to show character, dignity and respect on and off the ice. "It's very special for me to be awarded this by our media," Laughton said. "Throughout the year I try and bring positive energy to the rink and do all the little things to be a good teammate and representative of the organization. Getting more involved in the community has been important to me and I hope to continue to build on that each year." He had 13 goals and 27 points in 49 contests this season.
Added 9:53 am (EST)
Added 9:53 am (EST)

K. Kakko - F
NYR
It's not clear if Kaapo Kakko will be allowed to participate in the 2020 NHL playoffs.
Like every other player, Kakko will need to undergo a pre-participation medical examination (PPME), which will include an evaluation of pre-existing medical conditions that might put him in a higher risk group with COVID-19. Kakko is a type-1 diabetic with celiac disease, so after the PPME he might be ruled as ineligible to take part in the postseason. Rangers president John Davidson said that for now the team is looking to have him in the lineup, but that the call is ultimately up to the medical professionals. “If the doctors and the world of science told us not to play him, he’s not playing. It’s that simple,” Davidson said back in June.
Added 9:23 am (EST)
Added 9:23 am (EST)

O. Ekman-Larsson - D
ARI
Oliver Ekman-Larsson spent the NHL pause in Sweden, where the restrictions have been lighter compared to the United States.
Ekman-Larsson will be going into training camp in good shape, but that these last few months have been difficult for him. "With this virus going around, I haven't felt so good mentally," Ekman-Larsson said. "Going back home and being around my family really helped that situation. I benefited from the physical part of being away. For the mental part, it was nice to get away from it." He's back in Arizona now, skating ahead of the beginning of training camp.
Added 9:19 am (EST)
Added 9:19 am (EST)