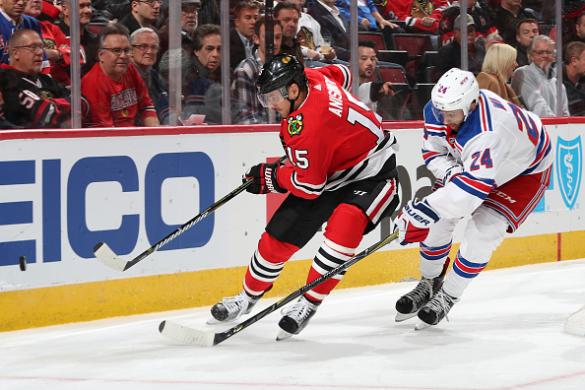 The big Russian began the 2017-18 campaign on the Blackhawks' third line, which offers far less fantasy value. However, Anisimov was recently reunited with superstar Patrick Kane and has lit the lamp regularly as a result. The 29-year-old pivot now boasts nine goals in 19 games and is on pace to shatter his previous career high in goals: 22 (set twice, with Chicago last season and with Columbus in 2013-14). Pick him up, if available.

The Matt Duchene trade should now provide greater opportunities for several young Avalanche forwards, including Tyson Jost, J.T. Compher, Vladislav Kamenev and Kerfoot. The latter has begun his professional hockey career with style, producing 13 points in his first 16 games. Kerfoot is currently tied for fifth among rookies in NHL scoring, and has a shot to be in the Calder trophy conversation when the season ends. 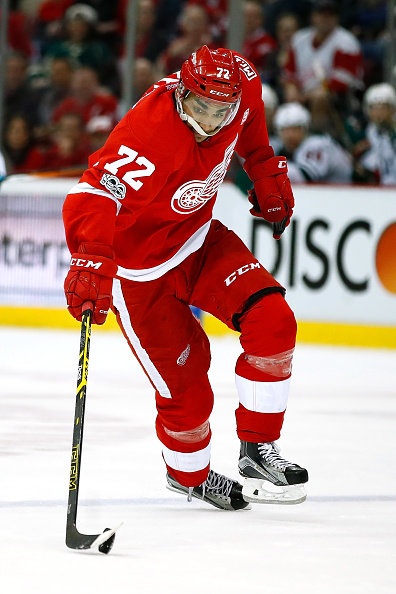 It is quite possible that several fantasy leaguers forgot all about Athanasiou because of his late start to the regular season (he was an unsigned restricted free agent during Detroit's first 10 games). Therefore, do not hesitate to pick him up if still available. The speedy, versatile forward started out as the Red Wings' fourth-line center, but was quickly moved up to an exciting scoring line alongside Dylan Larkin and Anthony Mantha.

A speedy power forward who had just 61 NHL games under his belt entering this season, Wood has both a two-goal and a three-goal game so far in 2017-18. The son of former NHLer Randy Wood is a bit streaky, so he might not be able to help fantasy teams every week. However, there is enough talent on New Jersey this season to take a flier on a raw winger like Wood. He should remain a top-nine forward on the Devils all season.

In deep leagues, Staal is probably taken already. However, he could still be available in free agency or the waiver wire in shallower leagues. His offensive game has taken off since Carolina head coach Bill Peters placed Finns Sebastian Aho and Teuvo Teravainen on Staal's line. In fact, the big, two-way center has six points in his last three games. Staal's career high is 50 points (2011-12), which he may eclipse if his line remains intact.

He is probably unavailable in all keeper leagues and most non-keeper formats, but perhaps a few fantasy leaguers decided to abandon Reinhart after he started the regular season slowly as Buffalo's third-line center. Pick him back up now that the Sabres have moved him back to right wing on the No. 1 line alongside Jack Eichel and Evander Kane. Reinhart is also a very strong power-play performer, so his points total could explode.

Chicago is currently trying to figure things out with their entire roster, especially along the blueline. The six-time Stanley Cup champions are very happy to have Rutta, a first-year NHLer signed out of the Czech Republic Extraliga. He is currently paired with Swede Gustav Forsling and has produced nine points in his first 19 NHL games. The 27-year-old Rutta could eventually find himself riding shotgun next to defenseman Duncan Keith.

He is still not a finished product, but the Finnish sniper is starting to show positive signs of life at the NHL level. Edmonton has had trouble finding secondary scoring this season, so Puljujarvi represents an important cog in the Oilers attack. He is obviously unavailable in keeper leagues, but Puljujarvi could be had in a number of year-to-year fantasy formats. That all said, it may not be until 2018-19 when Puljujarvi puts everything together. 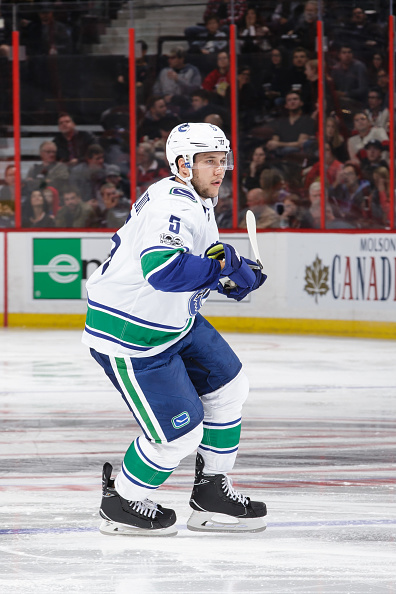 The No. 8 overall draft pick in 2012 had trouble cracking the Stanley Cup-champion Penguins' lineup and was eventually dealt to Vancouver earlier this season for a second chance. So far, so good for Pouliot. He has taken advantage of injuries to Alexander Edler, Chris Tanev and Troy Stecher to establish himself (finally) in the NHL. Pouliot boasts five assists in 15 games for Vancouver and is also seeing regular ice time on the power play.

One of the NHL teams currently struggling to find consistent goaltending is the Islanders, as veterans Thomas Greiss and Jaroslav Halak have both been running hot and cold so far in 2017-18. Enter Gibson, whose AHL numbers (8 GP, 2.13 GAA, .924 Sv%) so far this season have been better than projected third-string netminder Kristers Gudlevskis. Gibson, a 24-year-old Finn, may be a candidate to appear in Brooklyn this season. 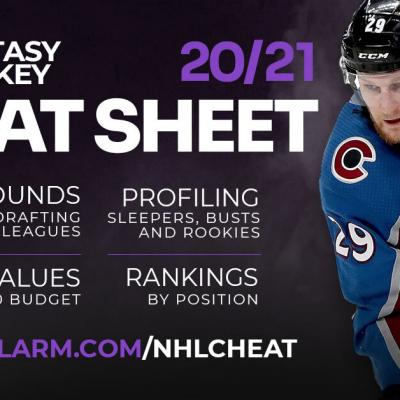 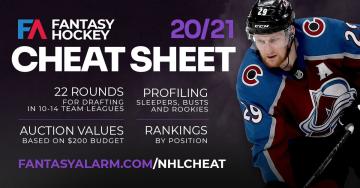 NHL Lafreniere won't be loaned to Team Canada for WJC

J. Norris - F
OTT
Josh Norris has been skating with Jack and Quinn Hughes as well as other NHLers over the extended offseason.
"It was nice to be with players that are better than you and learn from them and have fun. We had ice week after week, we all have a good sense of humor and worked hard," Norris said. Once the Senators finally have their training camp, Norris will be in a strong position to compete for a job. He stood out in the AHL last season, scoring 31 goals and 61 points in 56 contests. He could end up securing the Senators' second-line center spot after that impressive AHL campaign.
Added 12:23 pm (EST)
Added 12:23 pm (EST)

D. Gustafsson - F
WPG
David Gustafsson is day-to-day in Swedish HockeyAllsvenskan action with a minor lower-body injury.
Gustafsson will return to North America once training camp begins. The 20-year-old, who was taken in the second round, 60th overall in 2018, had seven goals and 17 points in 16 games with Tingsryds AIF before the injury and could return to action this weekend. Gustafsson played 22 games with the Jets last season, scoring once. He also played 13 games with Manitoba of the AHL where he had two goals and seven points in 13 games. Now that he has one year under his belt in North America, look for a lot more this season from the center.
Added 10:09 am (EST)
Added 10:09 am (EST)

A. Steen - LW
STL
Alexander Steen is back in St. Louis but there is no word as to whether or not he will be able to play this season due to an undisclosed injury.
The Blues have all but Klim Kostin and Alexei Toropchenko (both are still playing in the KHL) back in the city from their European contingent, with Steen just returning. “Steen’s back in town," GM Doug Armstrong said. "He popped his head in here. He still has some issues. He’s more of a wait and see than Tarasenko. ... He hasn’t had any surgery.” Stay tuned as he certainly will not be ready for the start of the NHL season.
Added 10:04 am (EST)
Added 10:04 am (EST)

V. Tarasenko - F
STL
St. Louis GM Doug Armstrong said that Vladimir Tarasenko (shoulder surgery) is not close to returning.
Tarasenko underwent surgery on his wonky shoulder in early September and at that time it was thought he would need five months and then be re-evaluated. That scenario would happen in early February and that is what Armstrong is still thinking. “Tarasenko’s in the middle of his rehab, still a couple more months away from getting a real read on him,” Armstrong said. “I know he’s in working out a lot. He’s doing his rehab. He looks to be in great spirits." This one is a tough read as far as fantasy is concerned as he probably shouldn't be taken in re-draft leagues but should definitely be thought of in dynasty pools as he will have a lot of value in 2021-22 and beyond.
Added 9:57 am (EST)
Added 9:57 am (EST)

J. Boychuk - D
NYI
The New York Islanders will get some much needed cap relief with Johnny Boychuk ending his career due to an eye injury.
Boychuk will not retire as he will continue to collect the last two seasons of his six-year/$42 million deal, but he will eventually go on the long-term injured reserve list and thusly freeing up $6 million per season, money that will be put to use to sign Mathew Barzal, their top center.
Added 8:54 am (EST)
Added 8:54 am (EST)

M. Cajkovic - F
TB
Maxim Cajkovic has been kicked off the Slovakian Junior team for disciplinary reasons.
Cajkovic, who was taken by Tampa Bay in the third round of the 2019 Draft, was expected to be a leader on the young squad after playing last season in the World Juniors, picking up a pair of assists in five games, but he apparently dished out a couple of dirty hits in scrimmage, leading to his being removed from the team. “I feel sorry for what happened. I realize my behavior was not appropriate and I bear the consequences. I respect the coaches’ decision,” Cajkovic said per the Hockey Slovakia twitter page. Cajkovic had two goals and nine points in 12 games for Bratislava of the Austrian League after playing a couple of seasons in the Quebec Major Junior Hockey League with St. John, scoring 18 goals and 24 assists in 36 games last season.
Added 8:45 am (EST)
Added 8:45 am (EST)

J. Sanderson - D
OTT
Jake Sanderson scored once and added an assist to lead the University of North Dakota Fighting Hawks to a 4-3 win over Denver in NCAA action Friday.
Sanderson, who was taken fifth overall in the 2020 Draft, is playing his first season in college and was a dominant force in only his second game. The defenseman scored a power play goal on a one-timer from the faceoff dot to tie the game at one in the second period. The Senators are extremely high on the first defenseman taken in the draft as he has an all-around game as he can control the tempo of a game and is an outstanding skater. The Senators can't wait for Sanderson to turn pro but they will be patient with the young blueliner.
Added 8:39 am (EST)
Added 8:39 am (EST)

M. Zibanejad - F
NYR
Mika Zibanejad finished the regular season by scoring 23 goals in 22 contests.
The 27-year-old took a major step forward last season, as he scored an impressive 41 goals and 75 points in just 57 contests. It was the first time in his career that he managed to score more than 30 goals, so we'll see if he's capable of doing it again. The expectation is that he'll center a line with Chris Kreider and Pavel Buchnevich. Zibanejad's fantasy stock has never been higher. Even if he doesn't score 40 goals again, he should still manage to produce enough to be an important part of any fantasy roster in 2021.
Added Yesterday 10:22 pm (EST)
Added Yesterday 10:22 pm (EST)