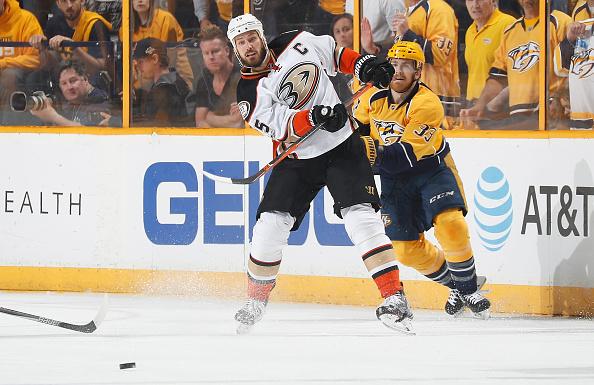 While it appears Ottawa has avoided disaster here, captain Karlsson will still miss the team's current three-game road trip through Western Canada. That said, Karlsson might be back next week. Therefore, hotshot rookie Thomas Chabot (who was recently recalled due to injuries to both Johnny Oduya and Ben Harpur), will probably not stick around upon Karlsson's return. Chabot is a risky fantasy option in non-keeper formats at this time.

The Bruins' power-play quarterback returned to action much sooner than anticipated, as he decided to play with an extra protective piece of plastic around the jaw area. Krug wound up missing just one game. This is good news for Boston, but bad news for rookie rearguard Charlie McAvoy (who is now bumped from the top PP unit to the second team) and fellow freshman Matt Grzelcyk--who was sent down to the AHL after Krug's return. 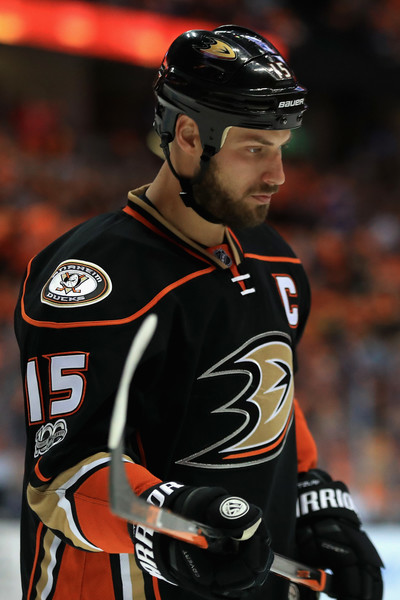 The injury-ravaged Ducks were at least able to get back their captain and best player this week. Getzlaf was immediately inserted back onto Anaheim's top line alongside longtime partner Corey Perry. Joining them were both Ondrej Kase and Andrew Cogliano, who split time at left wing on Line 1. However, veteran winger Patrick Eaves could take over first-line duties next to Getzlaf and Perry once he recovers from his lower-body injury.

This one could be either a big deal or a minor blip, depending on the severity of Schmaltz's upper-body injury. The Blackhawks' second-line center was injured in Game 1 vs. Pittsburgh but was able to start the following contest against Columbus (though he lasted only 34 seconds before aggravating his issue). Without Schmaltz to play with Patrick Kane and Ryan Hartman, Chicago is forced to utilize Artem Anisimov on the No. 2 unit.

The Stanley Cup hero missed Pittsburgh's first three games of the regular season but could be ready to return this week. That said, he may not get back his spot on the first power-play unit (which has gone to Jake Guentzel in Hornqvist's absence) and could start the regular season on Pittsburgh's third line. Both scenarios would dramatically reduce Hornqvist's fleeting fantasy value. Furthermore, he is in the final year of his contract.

This injury sneaked up on hockey observers when the 23-man rosters were announced last week. However, back injuries are never a good thing. Jenner's absence has opened the door for rookie wingers Sonny Milano and Pierre-Luc Dubois to see more ice time. Once Jenner returns, one of the rookies may wind up on the fourth line (likely Dubois). For now, however, Jenner remains in a holding pattern. His fantasy value may take a hit.

The 33-year-old veteran has been diagnosed with diverticulitis and will likely miss at least the first month of the regular season. Backes's absence has greatly helped Frank Vatrano's situation, as the latter was almost cut from training camp after a so-so preseason. Vatrano was beaten out by rookie wingers Anders Bjork and Jake DeBrusk but has landed on his feet on the third line due to the Backes situation. Its now up to Vatrano to stick.

As mentioned above, back injuries can really be tricky to evaluate and handicap. Parise, however, seems to be doing a lot better and is back practicing with the Wild. There is a good chance he will return to action this week. The Minnesota player with the most to lose from Parise's return is Tyler Ennis, though Mikael Granlund's undisclosed injury may provide Ennis with a reprieve. Otherwise, look for Ennis to become the extra forward.

One of Pittsburgh's steadiest citizens, Cole took a puck in the mouth against Nashville last week and will miss time. This should open the door for Chad Ruhwedel to play regularly for the next little while. A solid puck mover, Ruhwedel might be paired with Olli Maatta on the No. 2 defense unit (which could provide decent fantasy value, at least on a short-term basis). Cole's absence might also affect regular defense partner Justin Schultz.

The Ducks have the makings of a formidable duo in goal with John Gibson as the main starter and Miller as a quality, veteran backup. However, the latter remains on the sidelines due to an upper-body issue that seems to be lingering longer than expected. With Miller unable to play in the early going, Anaheim will turn to Gibson to play far more than originally planned. Third stringer Reto Berra might also see some action, but not much. 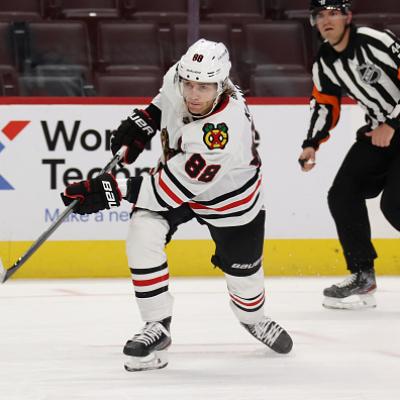 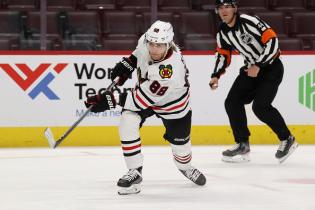 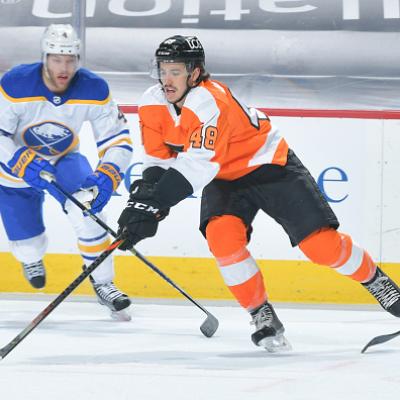 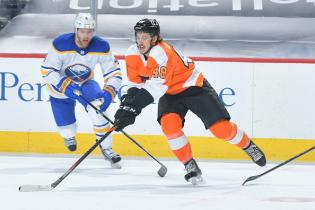 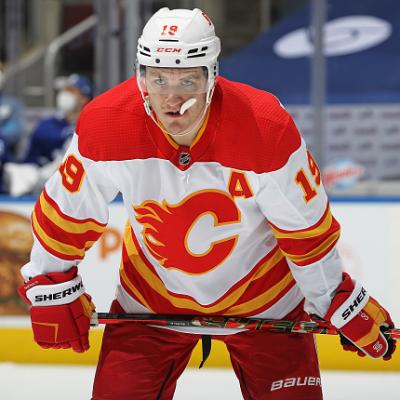 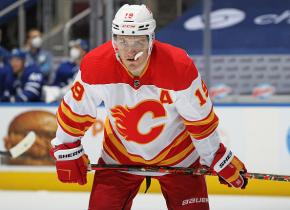 NHL Thomas Greiss roughed up in the Windy City

K. Lankinen - G
CHI
Kevin Lankinen turned aside 44 of the 46 shots he faced in Sunday's 7-2 win against the Detroit Red Wings.
Lankinen pushed his record to 9-3-3 with a 2.55 goals-against average and .924 save percentage in his 15 starts to date. The Blackhawks were supposed to be in a rebuilding season, and not much was expected from them by the preseason prognosticators. But Lankinen has come out of nowhere to emerged as a No. 1 fantasy backstop, and Patrick Kane and Alex DeBrincat have been red-hot on offense, keeping the 'Hawks right in the mix in the Central Division. The Blackhawks play three games in four days against the Tampa Bay Lightning starting Thursday night.
Added 11:03 pm (EST)
Added 11:03 pm (EST)

A. DeBrincat - LW
CHI
Alex DeBrincat registered a goal with three assists in Sunday's 7-2 rout of the Detroit Red Wings.
DeBrincat finished with a plus-3 rating, five shots on goal and a blocked shot with three hits in his 19:17 of ice time across 20 shifts. The 23-year-old suburban Detroit native has goals in back-to-back games, and he has three goals and nine points with a plus-4 rating during his current six-game point streak. He also has nine goals and 19 points with a plus-9 rating across 13 games in the month of February. He'll look to keep it cooking Thursday, Friday and Sunday in a three-game set at United Center against the Tampa Bay Lightning.
Added 10:55 pm (EST)
Added 10:55 pm (EST)

R. Carpenter - F
CHI
Ryan Carpenter notched a pair of goals in Sunday's 7-2 blasting of the Detroit Red Wings.
Carpenter made it 2-0 with an even-strength goal in the first period, helped out by Matthew Highmore and Ian Mitchell. He was back at 7:06 of the third period wit ha power-play goal, this time assisted by Alex DeBrincat and Adam Boqvist. He ended up with a plus-1 rating, three shots on goal and two hits in his 10:57 of ice time across 15 shifts while winning all three of his faceoff attempts. It was Carpenter's first goal since Jan. 27, and his first-ever NHL game with two goals. As such, his fantasy value remains rather negligible.
Added 10:49 pm (EST)
Added 10:49 pm (EST)

P. Kane - F
CHI
Patrick Kane scored his 400th career goal in Sunday's 7-2 whitewashing of the Detroit Red Wings.
Kane not only scored the goal, but he added a pair of assists with a plus-3 rating and three shots on goal in 20:41 of ice time across 22 shifts. The milestone hasn't been a bother to Kane, as he has been on fire in the month of February. He has lit the lamp four times in the past five games, and he has a whopping seven goals and 24 points with a plus-11 rating across his 13 games since flipping the calendar from January to February. The red-hot play of Kane and goaltender Kevin Lankinen have turned a season which was supposed to be a rebuilding year into one where Chicago is right in the mix.
Added 10:33 pm (EST)
Added 10:33 pm (EST)

E. Svechnikov - F
DET
Evgeny Svechnikov scored a power-play goal in Sunday's 7-2 road loss against the Chicago Blackhawks.
The overall result for the Red Wings wasn't good here, but they were for the 'other' Svechnikov. He had the game-winning goal on Saturday, and now he has goals in back-to-back games for the first time in his NHL career. The Red Wings have been waiting for the first-round pick in the 2015 NHL Entry Draft (19th overall) to have a light go off, and perhaps we're starting to see the start of Svech finally realizing his potential at the NHL level. For fantasy managers, he is still a wait-and-see guy. If he can produce over a longer stretch of games, he might be worth adding in seasonal play.
Added 10:26 pm (EST)
Added 10:26 pm (EST)

T. Greiss - G
DET
Thomas Greiss allowed seven goals on 32 shots in Sunday's 7-2 blowout loss against the Chicago Blackhawks.
Greiss and the Red Wings held their own after falling into a 2-0 hole after 17:13. It was 2-1 until early in the third period when the floodgates opened up. Pius Suter, Ryan Carpenter, Patrick Kane, Dominik Kubalik and Alex DeBrincat scored five goals in the third for the home side, as Chicago ran away and hid. Greiss has been considered the No. 1 netminder in the Motor City, but Jonathan Bernier has six of his team's seven victories, and it might not be too long before Greiss is fighting for crumbs while Bernier assumes the primary starting duties.
Added 10:22 pm (EST)
Added 10:22 pm (EST)

C. Makar - D
COL
Cale Makar "probably" won't play for the rest of Colorado's road trip, per coach Jared Bednar.
"I think we can probably rule him out here for this road trip. I still would consider him day-to-day because I don't know that it's going to be longer than the next couple games," said Bednar after Saturday's 6-2 win over Arizona. The Avalanche bench boss added that there is currently no timetable for Makar. It doesn't sound like Makar will be available to play on Monday or Wednesday versus San Jose.
Added 9:47 pm (EST)
Added 9:47 pm (EST)

C. DeSmith - G
PIT
Casey DeSmith stopped 28 shots in a 2-0 loss to the New York Islanders on Sunday
DeSmith made his first start since Feb. 11 when he earned a 4-3 shootout win over the Islanders. He wasn't able to pick up his fifth win of the year on Sunday, but he played well in the contest. The Islanders went 2-for-5 on the man advantage on Sunday and that proved to be the difference. DeSmith's record slips to 4-2-0 on the year.
Added 7:56 pm (EST)
Added 7:56 pm (EST)