The Fantasy Alarm NHL Draft Guide breaks down the top 20 centers for the 2016-17 fantasy hockey season. 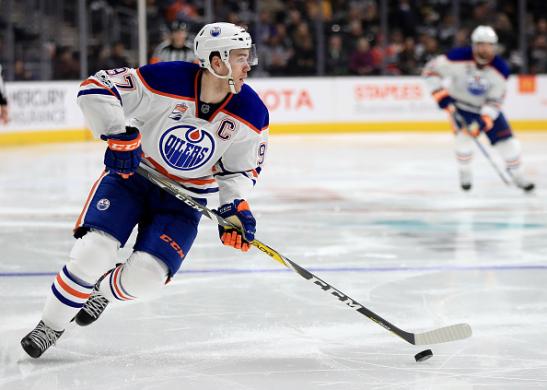 In most fantasy hockey leagues that require a certain amount of players per position, it is fairly difficult to win without strength at the center position. In fact, teams that enjoy a lot of success in the NHL these days usually have a franchise center to build around. Sometimes two. Of the top-20 scorers in the NHL last season, nine played predominantly at center. There could have been even more centers at the top of the scoring list if it wasn't for injuries. These days, a lot of coaches are asking centers to play deeper in their own zone. That hurts their fantasy value. However, the center remains the top playmaker on most NHL teams, so offense is usually generated down the middle of the ice. Here are the 20 best bets at center for fantasy hockey drafts this year:

He is widely considered to be the best player in the NHL now, and already has a scoring title at 20 years of age!

If McDavid is not the best player in the league, then the honor remains with 'Sid the Kid' (now a man at age 30).

Sidney Crosby's running mate is always among the league leaders in points per game. He has to stay healthy.

Will he stay or will he go? The Islanders' franchise center enters the final season of his contract highly motivated.

The talented German playmaker is to Connor McDavid what Evgeni Malkin is to Sidney Crosby with Pittsburgh.

The Lightning captain should be healthy again, so do not be surprised if he scores the most goals from this list.

Sophomore Matthews should follow up his Calder trophy campaign with more production across the board.

He surprised many last season by placing seventh in NHL scoring. Everybody now knows Scheifele is good.

If only he could just stay healthy! The big, two-way Finn has everything to become an elite player if he avoids injury.

The Capitals lost some talent up front in the off-season, but Backstrom remains an excellent two-way pivot.

Supremely talented, MacKinnon has teased NHL observers with mesmerizing ability. It is now time to put out.

Nashville might have won the Stanley Cup last spring if Johansen were healthy. He is their best playmaker.

A supremely gifted playmaker, Wennberg might be passing the puck to sniper Artemi Panarin this season.

He may not dominate as much as when he was younger but 32-year-old Getzlaf is still a quality point producer.

He has size, maturity, sniping ability and a premier playmaker (Johnny Gaudreau) on his line. What is not to like?

If the Capitals decide to play Kuznetsov with Alex Ovechkin, he may have more value than Nicklas Backstrom.

The Flyers need captain Claude to get back to his point-per-game scoring ways. Call it a comeback in 2017-18.

One year removed from leading the league in playoff scoring, Couture might enjoy a career year at age 28.

S. Starrett - G
EDM
Shane Starrett has been assigned to Wheeling of the ECHL.
Starrett signed an AHL contract with the Wilkes-Barre/Scranton Penguins in late October for the 2020-21 season. He posted five wins with a 3.63 goals-against average and .874 save percentage in 14 AHL games with Bakersfield last season.
Added 5:27 pm (EST)
Added 5:27 pm (EST)

Z. Bogosian - D
TOR
Toronto GM Kyle Dubas believes the Maple Leafs could use seven blueliners at times during games in 2020-21.
"The depth of our D would lend itself to this and I wouldn't be surprised to see us use it from time to time," Dubas said on Saturday. He mentioned that Zach Bogosian's penalty kill ability and Mikko Lehtonen's power-play skills could become factors in this decision, but it will ultimately to be up to coach Sheldon Keefe if it's implemented. Dressing seven defensemen in games could also provide Toronto's star forwards with more ice time during even-strength situations.
Added 4:51 pm (EST)
Added 4:51 pm (EST)

M. Rasmussen - F
DET
Michael Rasmussen has three goals and 11 points in 10 games with the Graz 99ers.
Rasmussen has been a disappointment offensively since the Red Wings made him the ninth overall pick in the 2017 Draft. He spent all of last season in the AHL, scoring seven times and adding 15 assists in 35 games after scoring eight and adding 10 assists in 2018-19 for the Red Wings. Detroit sees him as a two-way center but he lost time last season due to injury and that hampered his development at center. The move to Europe will help that and he should be in good shape to make the Red Wings once training camp begins in North America.
Added 10:07 am (EST)
Added 10:07 am (EST)

E. Pasquale - G
TB
Edward Pasquale has been even better this season in the KHL after a great season last year.
Pasquale went over to the KHL after seeing his first NHL action in the 2018-19 season, playing three games for the Tampa Bay Lightning. The Bolts chose not to re-sign the netminder and he headed across the pond, signing with Astana Barys  and going 24-18-1 with a 2.03 GAA and a .930 save percentage. This season he has been even better as he is 12-4-2 with Yaroslavl Lokomotiv with a 1.53 GAA and a .937 save percentage. The 30-year-old may never get another chance in the NHL but he is carving out a nice career in Russia.
Added 10:00 am (EST)
Added 10:00 am (EST)

T. Benson - F
EDM
Tyler Benson is enjoying his time in Switzerland despite contracting the coronavirus back in October.
Benson was loaned by the Oilers to GCK of the Swiss Hockey League in September and has two goals and 10 points in 10 games thus far. “I had a bad fever … it was like a bad flu. I was wearing my mask at the rink, trying to stay as safe as possible washing my hands, using hand sanitizer. Not sure how or where I got it, but a few other players tested positive at the same time,” a now-healthy Benson said. Benson, who was selected 32nd overall in the 2016 Draft, is looking to make the Oilers this season as a bottom-six forward. He saw his first NHL action this past season and picked up a solitary assist in seven games.
Added 9:55 am (EST)
Added 9:55 am (EST)

I. Samsonov - G
WSH
Former Washington goaltender Olie Kolzig said that Ilya Samsonov has plenty of upside and has the ability to be just like Andrei Vasilevskiy.
That's heady praise from the Capitals professional development coach as Vasilevskiy is widely considered to be the best goaltender in the NHL.  Kolzig also thinks that the addition of Henrik Lundqvist to the mix will be a valuable learning tool for Samsonov. "[Samsonov's] still a young guy and he's going to have some rough patches," Kolzig said, "So you need that veteran guy that's going to be able to get in there and do the job because we are still a competitive team that still have aspirations of winning another Stanley Cup and you don't want to sacrifice that with having the growth of a young goaltender." Look for Samsonov to garner 60-65 percent of the starts for the Capitals this season. He should be a bottom-end first goaltender or a top of the line second netminder on your fantasy team and he will make a great pick in dynasty pools if he is still available.
Added 8:49 am (EST)
Added 8:49 am (EST)

E. Bemstrom - F
CBJ
Emil Bemstrom will return to the Columbus Blue Jackets as his loan agreement with HIFK has ended.
Bemstrom, had eight goals and 17 points in 16 games for the Finnish side, who only played once in the last two weeks. Bemstrom had 10 goals and 20 points in 56 games with Columbus last season, his first in the NHL. He has some fantasy upside and is expected to have a good shot at being a top-six forward for John Tortorella and the Columbus Blue Jackets this season.
Added 8:40 am (EST)
Added 8:40 am (EST)

Q. Byfield - F
LA
David Satriano of NHL.com expects Quinton Byfield to debut with the LA Kings this season.
Byfield (6-foot-4, 215 pounds) has the physical tools to make an immediate impact in the NHL, but it will depend on LA's plan for the second-overall pick in the 2020 NHL Draft. "Physically, I think he has the ability to step in the NHL with his size and his skating ability," Kings general manager Rob Blake said in October. "Those players that are drafted in that type of level, there's always that type of look at them to see if they project to be in the NHL as soon as next year. Physically, his size would do that, but there's a lot more that goes into it." Byfield has said that he will not report to the Kings' camp until the World Junior Hockey Championships have concluded (scheduled from Dec. 25, 2020 to Jan. 5, 2021). Initial reports had the NHL wanting to start on Jan. 1 but that is far from a guarantee. Byfield is worth a spot at the end of your bench to start the season.
Added Yesterday 8:37 pm (EST)
Added Yesterday 8:37 pm (EST)