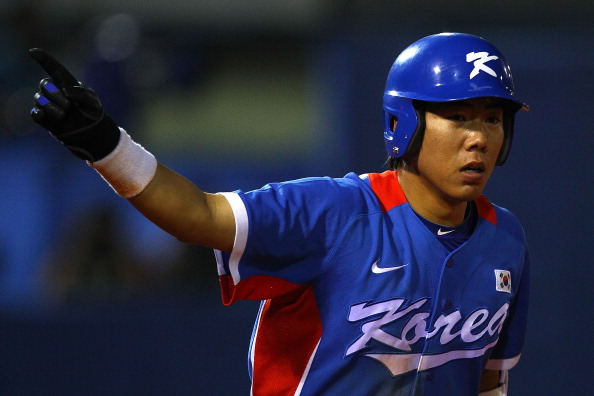 “Where are you ladies from?”

The words tumble out of my mouth like ice cubes squeezed from a tray.

“I am from Venezuela,” says the beautiful blonde sitting next to me, “and she’s from Brazil.”

She waves her hand at the woman seated next to her, who is equally beautiful and wearing a leopard-print jacket with thick-rimmed glasses. I came to this cafe to write about baseball (well ahead of my deadline, too) but now that's on the backburner. All I can do is stare at the page beneath me and listen to their banal musings like, "I took an advil today" or "we should go somewhere new for dinner"... and swoon. Those damn accents. Before long, I'm Han Solo congealed in carbonite. Stuck.

The point of the story is this. Whether it's beer, wine, women or cheese, there's something extra sexy about it coming from somewhere else. As a Fantasy owner I'm no different. Yes — exotic women are one thing; but, exotic men are another. You know some of the names I'm thinking of — Rusney Castillo, Yasmany Tomas, Hector Olivera, Jung Ho Kang. (Yoan Lopez, Yadier Alvazer, Raisel Iglesias, Yoan Moncada, Andy Ibañez and Roberto Baldoquin will also be important, but they're a little further away.) We've covered the rookies in MLB farm systems, so now it's time to turn our attention to the guys being imported from abroad to fantasy draft pools this spring.

There isn't a transcendent talent like Jose Abreu or Yasiel Puig in the current class, but that doesn't mean they won't be very good. It's rational to fear that foreigners — Cubans especially — are in danger of being overvalued thanks to the success of their predecessors. I'll try to give realistic expectations for each player in their blurb.

GET YOUR COPY OF THE 2015 FANTASY ALARM BASEBALL DRAFT GUIDE AND DOMINATE. CLICK ON THE LINK TO FIND OUT HOW TO PICK UP YOUR COPY... FOR FREE.

Hector Olivera, 2B, Free Agent (Age: 30) — The suspense is like killing us. We’ve been waiting for Olivera to be declared a free agent for months. His paperwork is in place, and gauging by the interest and projected dollars he’s going to sign for, teams seem to think the considerable risk that comes along with signing Olivera is worth it. (The latest reports suggest his eventual price tag will be somewhere in the range of $70 million, more than Yasmany Tomas and Jose Abreu last offseason.)

Like I said, Olivera doesn’t come without risk. He dealt with thrombosis in his bicep a few years ago and he's shown inexplicable fatigue at workouts, making it reasonable to wonder whether or not he can make it through an entire major league season. Also, and we’ve got to bring it up, there’s the age issue. We think that Olivera is heading into his age 30 season, which is essentially the age we’ve come to expect for players hitting the free agent market. Although the US has rekindled its relationship with Cuba diplomatically, we still have no way to obtain or verify their records. Olivera, like virtually every Cuban, left the island illegally — Yoan Moncada was the first player ever to legally defect — so there are conerns that he could be older than he claims.

If what scouts say about his skills translates to the big leagues, Olivera could post a batting average between .270 and .280 with 16-20 home runs. He has an excellent approach at the plate and his bat speed is well above average. If the plate discipline translates, he could tally an OBP in the .360-.375 range. At this point, a lot of his value is tied to his landing spot. If he’s in LA, you can’t expect big power output, same with San Diego. But, if the Yankees land him, there’s an argument for Olivera as a Top-5 2B, even with the aforementioned risk factored.

Yasmany Tomas, 3B, Diamondback (Age: 24) — Tomas is a wild card. I tend to shy away from guys with contact issues, and Tomas is likely one of those guys. The power is special, like 30-plus home runs special, but the downside is that he may not be able to tap into it if he's striking out 30-plus percent of the time. He's being drafted in the 14-15th round, and while there's 25-30 HR upside, he could also hover around the mendoza line. I'd rather have Wil Myers, Jayson Werth or Yordano Ventura, who are all going after him in Chief Bender's Mock Draft Army ADP. I'm thinking he's more Dayan Viciedo than Yoenis Cespedes.

Rusney Castillo, OF, Red Sox (Age: 27) — Castillo is the only player here that's logged major-league at-bats. After signing a record-breaking 6-year/$72.5 million deal last fall, he debuted in Boston in September after a brief minor league stint. After a layoff of more than a year, Castillo went 12-for-36 (.333) in 40 plate appearances, slugging two home runs and swiping three bases. In the workouts leading up to his signing, the 5-foot-8, 185-pound center fielder showed more pop than he had when scouts saw him during international play in 2012. He has an aggressive approach, yet a career strikeout-rate of just 11.3 percent in Cuba. He's a safer bet than Tomás to make the adjustment to major league pitching. He's got above average speed, which should translate to 20-plus stolen bases over a full season. The worry is he's a helium candidate, especially with a strong spring and the "Boston-bump." I like him as third or fourth outfielder who could hit .270 with 15 home runs and 20-plus pilfers. Solid counting stats should be there too, since the Boston lineup will be better.

Jung-Ho Kang, 2B/SS/3B, Pirates (Age: 28) — Kang has flown mostly under the radar this offseason after signing a "pedestrian" 4-year, $11 million deal with the Pirates. Kang's swing is a thing of beauty (see below), but there are questions about whether or not he'll find a defensive home with Neil Walker holding it down at second base and Josh Harrison at third. He hit .356/.459/.739 with 40 home runs in 117 games last year in the KBO — an extreme, offense-oriented league. It's tough to translate his number to the MLB, but it's lazy to simply chalk up his marvelous performance to the league he played in. If he finds regular at-bats with the Pirates, it wouldn't surprise if he challenges for 20 home runs in his rookie season, with MI eligibility too, presumably.

Yoan Moncada, IF, Free Agent (Age: 20) —Moncada is expected to make his decision on a destination this week. At 19, Moncada is still subject to international signing rules. He's expected to sign for $30-plus million, which will trigger a host of bonus penalties, including a 100 percent tax. His raw athleticiscm and skills are compared to Yasiel Puig, except he's a switch hitter who's good enough to play in the infield. He would fit comfortably in the Top-10 of any industry prospect list, and should contribute in all five categories once ready, which may not be until 2017.

Yoan Lopez, SP, D'Backs (Age: 22)— The D'Backs, who also signed Yasmany Tomás, went over their international bonus pool to sign Lopez this offseason, giving him an $8 million bonus. He's a Cuban national who throws a low-to-mid 90's fastball with a wipeout slider. The early reports from camp suggest he's come as advertised. Oh, and he's got a shot at cracking the big leagues at some point this season.

Raisel Iglesias, SP/RP, Cincinatti Reds (Age: 25) —The Reds signed Iglesias to a 7-year/ $27 million deal last fall, and shipped him off to the Arizona Fall League where he impressed with a lively fastball (92-95 MPH) and a wipeout slider. He pitched mostly as a reliever in Cuba, which means his arm is relatively low-mileage. The Reds are hopeful he can eventually become a starter. He'll likely begin the season in Triple-A, but spend time in the Reds' major league bullpen at some point this year.

Andy Ibañez, 2B, Free Agent (Age: 22) — Ibañez has been declared a free agent, but not much news has surfaced about his market. Scouting reports suggest he's excellent fielder with a knack for contact. He lacks an impact tool, so he's not a particularly exciting fantasy prospect at the moment.

Yadier Alvarez, SP, Free Agent (Age: 18) — Alvarez is a buzzy name prospect circles right now. He showed a mid-to-high 90's fastball at Hector Olivera's final showcase at the Dominican air force base a few weeks ago with a nasty slider. The MLB, however, announced that he won't be allowed to sign with a team until July 2nd. He'll immediately become one of the minor league's better pitching prospects.

Roberto Baldoquin, SS, LAA Angels (Age: 21) —Roberto Baldoquin was the Angels' biggest purchase this offseason, as they gave him an $8 million signing bonus. He's a Cuban shortstop who's on the smaller side: 5-foot-11 and 185-pounds. He's said to have strong defensive abilities, although there are questions about whether or not he's a better fit at second base in the long term. His offensive ceiling is up in the air, as he's never shown game power or the ability to catch up with premium velocity. He wasn't invited to the Angels' major league camp and will likely start in A-ball this season. He's not much of a fantasy prospect at this point.