NFL Training Camp Battles: Who is your Quarterback? 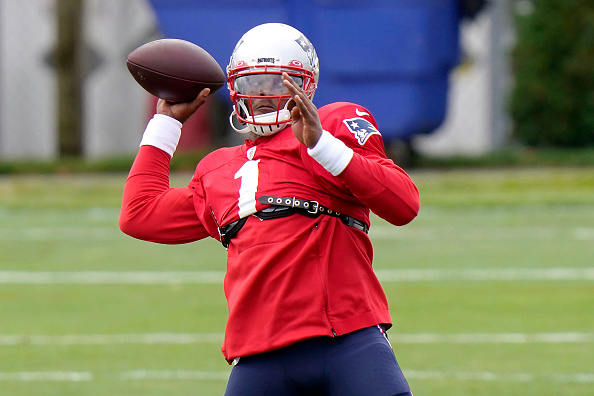 Welcome back to another edition of the Fantasy Alarm NFL Training Camp Battles 2020 article! We have another week of training camp down, and the season is getting closer upon us! Just a few more Sundays until the season kicks off, and we have some close battles to keep an eye on heading into the season.

The odds are moving even more in the favor of Cam Newton to start Week 1 for the Patriots after reports out of Pat’s camp stating that Jarrett Stidham has what they are calling a hip injury, and this hip injury is likely going to take several weeks before Stidham will be fully recovered. Both Newton and back-up QB Brian Hoyer were seen taking all of the starting QB reps in camp this past week due to the injury, and I don’t exactly feel like this battle is much of a battle anymore. We can more than likely put a stamp on Cam Newton getting the start in Week 1, and maybe the permanent starting QB job for the Pats.

#Patriots QB Jarrett Stidham has been battling discomfort from a leg injury and is not expected to practice much, if at all, today, sources tell me and @MikeGiardi. They will proceed cautiously.

At first, we just thought this QB battle was between journeyman Ryan Fitzpatrick , and 2020 5th overall NFL Draft pick Tua Tagovailoa, but with recent reports, Josh Rosen has been thrown back into the fold somehow. More recent reports from Dolphin’s camp are now reporting today that Ryan Fitzpatrick will be absent from Friday’s practice for personal reasons. Fitzpatrick was slated to be the starting QB for the Phins going into Week 1 due to his extensive veteran career, and the chance the Tua might not be fully ready to take-over the gig just yet. Now, all we have is a ton of speculation as Fitz leaves the team for “personal reasons”. Most of this speculation is surrounded by Covid-19, the fact that Fitz and his wife have seven children, and simply the fact that he is 37-years old and knows his time in the NFL is almost over. He has said in recent interviews that he knows he is nothing but a placeholder until Tua is ready, so could this time be sooner than expected? Will Josh Rosen being thrown into the fold stir up even more speculation, as he and Tua will be getting all of the first-team reps in Friday’s practice and who knows how much further until we know more on Fitzpatrick’s situation? Does resigning Jake Ruddock move any needles in the event that the speculation around Fitz has some logic and potential? Lots of questions now for the QB spot on this Dolphins team come Week 1.

This was a story we touched on a little in last week’s training camp article, and we must do it once again in this one, as it seems even more evident after more reports coming out that Kerryon Johnson is still being limited in practices, and that his knee-brace is still fully a thing. Not only this, but it is also even more evident that newly drafted, former Georgia stand-out D’Andre Swift has been taking more and more first team reps since the pads came on in camp. Also, starting QB Matthew Stafford has been raving about the rookie RB saying, “Swift is a sponge when it comes to learning to offense” and “you can clearly see the talent” that Swift possesses. It is looking better and better for Swift, even though he was seen getting stretched-out after his reps on Thursday (hopefully nothing but minor soreness, etc.), to maybe locking down the starting RB role for this Lion’s offense. As mentioned last week, Swift’s ADP (Average Draft Position) continues to be on the move as well, as now he is sitting around a 52 ADP, moving into RB2-type criteria as we move closer to the season.

This one isn’t exactly a battle, but more of a look into Kareem Hunt ’s potential role as the back-up RB to starting RB Nick Chubb . We must point out that Chubb is just now likely being discharged from concussion protocol after suffering a concussion in last week’s practices, and this is one instance where if Chubb cannot stay healthy, Hunt would be such a value to have. All reports and signs are point to a fully-healthy, much more explosive, and speedy Kareem Hunt in camp as he took all of the first team reps over the last few days as Chubb was getting his treatment for the concussion. This one is just one worth keeping an eye on, and for those thinking that Hunt will be a later-round sleeper, this is not the case. Hunt has been on notice by many in the fantasy football industry, and this is a huge part in why his ADP is 56.6 as of now. He was one of the biggest movers in ADP over the last couple of months or so as well. Chubb is still the number one guy in this backfield, however, we can’t feel strongly that Chubb will be a 20+ tote RB this season with Kareem likely to spell him in relief, and we all know Hunt has excellent pass-catching abilities as well, meaning Hunt could eat even more into Chubb’s workload.

This one isn’t exactly a battle either much like the Browns situation at RB, the Cardinals also have two RBs in their backfield that could arguably be the starter for any NFL team. Kenyan Drake is still the number one guy in Arizona, but back-up Chase Edmonds has been getting quite a bit of praise once again by coach Kliff Kingsbury this past week. We saw reports that Kingsbury stated, “We feel Chase Edmonds is a starting RB.” Should this bring any worry or concern to Kenyan Drake truthers out there, even more so since Drake is being drafted with an average draft position of 11.9? Drake showed exactly what he can do when utilized the correct way in the last eight games of the regular NFL season last year, and I think we should not feel all the concerned about the comments made for Chase Edmonds . Do we feel Chase will get work in this offense? Yes, we can believe that he, like Kareem Hunt in Cleveland, will have their times on the field during games, yet they are clearly the back-up RBs to their respective starters.

Kliff Kingsbury: We feel like Chase Edmonds is a starting running back https://t.co/ksNSsJ7IdE

This isn’t about who is the clear starting RB for the Chargers, as we know this to be Austin Ekeler after the Chargers allowed Melvin Gordon to test his waters in free agency where he was signed by the Broncos after the 2019 NFL season. This battle is between who will take-over the Melvin Gordon role in this offense between third-year back out of Northwestern in Justin Jackson , and newly drafted fourth-round pick out of UCLA Joshua Kelly. Just a few days ago, it was reported that Justin Jackson and Ekeler were the 1-2 backs getting the first team reps, and this should allow us to slot Justin Jackson one-step higher on the chart than rookie Kelly. Justin Jackson knows the offense, he waited his turn after Melvin Gordon , and he should be in line for the 1st and 2nd down role for the Chargers with Ekeler being the utility back with the pass-catching abilities he possesses. Ekeler is the main guy, but it seems there could be some late-round value in Justin Jackson to hopefully see some totes as well.

Early reports from #Chargers camp indicate Justin Jackson has a solid lead on rookie Joshua Kelley for No. 2 back job behind Austin Ekeler .https://t.co/2I2fVyFL7a

This story has been a growing one over the last week or so with rookie Zack Moss looking great in camp so far next to starting RB Devin Singletary . We all thought that the road was paved and cleared for Singletary in this starting RB role for the Bills after the departure of Frank Gore after the 2019 season, and then Zack Moss happened. Moss was drafted as the 86th overall selection by the Bills in the 2020 NFL Draft, and they really like what they are seeing out of camp so far. Many are also stating that they feel the gap between Singletary and Moss is growing closer and closer as camp goes on. Moss was the highest graded rookie RB out of this year’s draft class, even higher than AJ Dillion, and everyone’s darlings in both Jonathan Taylor AND Clyde Edwards-Helaire. This should be an interesting battle to keep an eye on, as Moss could potentially crush his 101.2 average draft position at the current moment.

Zack Moss is more than just a power back. At Utah, he had at least 28 catches both his sophomore and senior seasons. He’s already flashed that receiving ability at Bills training camp.https://t.co/GxIsx9EhI3

With Deebo Samuel not a 100% lock to start the season, and more than likely could possibly miss a few games even, the Niners WR corp has taken a liking to a few different players in their potentially extended roles. Rookie WR Brandon Aiyuk, Kendrick Bourne , and most recently, Dante Pettis have all been showing increasingly good signs in camp so far. Aiyuk saw his ADP rise quite a bit once the news of Samuel’s injury broke, but more recently, we have seen some good reports for Dante Pettis , who couldn’t have had a more miserable 2019 NFL season. Pettis has been reported as quite the stand-out in camp so far, and his name has been popping up more and more over the last few days. With this offense needing some veteran play-making abilities at the WR spot, Pettis could be a nice late-round flyer this season.

#49ers just wrapped their fourth practice. A bounceback day for the offense. Big runs from Jerick McKinnon and Raheem Mostert . Dante Pettis made a handful of catches and was the most productive WR.

Worth noting: Richard Sherman rested during most of the team drills.