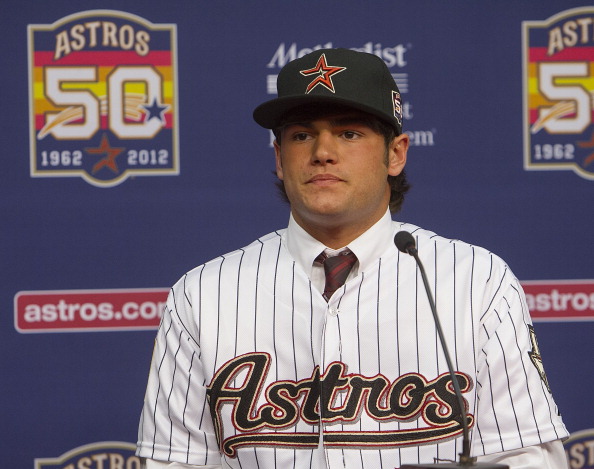 Just a day after announcing 21-year old pitching prospect Lance McCullers Jr. would be joining Triple-A Fresno, the team decided to press the fast forward button and promote him directly to the major leagues. In a certain light, the move makes sense — the Astros are in first place, Scott Feldman is their third-best pitcher and Mark Appel, simply put, isn't ready. The other option for the Astros, of course, is to dip their toes in the trade market, although it's a bit early in the season to make a splash. McCullers's numbers at Double-A Corpus Christi were nothing short of eye-popping. In 29 innings pitched, he allowed just two earned runs (0.62 ERA) on 15 hits, walking 11 and striking out 43. Those numbers are career bests across the board. In fact, in 2014, McCullers posted a 5.47 ERA over 97 innings in the Cal league. The lowlight of his terrible season was a walk rate that exceeded five batters per nine. The awful season was an anchor for his prospect renown. Baseball America, for instance, dropped McCullers out of its organizational Top-10 altogether.

“Well-below average control remains one of McCullers’s bigger issues, which is in part due to his crossfire delivery. He doesn’t always finish upright and doesn’t get great extension… though back soreness may have contributed. With his delivery, poor control and competitive nature, McCullers probably faces a future in the bullpen.”

Not a strong endorsement, by any means. The pitcher depicted above isn’t someone you would roster on a fantasy team. The good news, however, is the iteration of McCullers retracted in Internet scouting reports is not that same guy that’s taken the mound for Corpus Christi this spring. That doesn’t mean his projection has changed entirely, but rather that he could be better than some of us in the fantasy community are anticipating.

Like most notable pitching prospects, McCullers has a big fastball. It will sit in the 92-94 range, but he can crank it up into the high nineties when he needs it. Not only does he bring heat, but the pitch also has movement and life. Scouts give it a future plus grade (60 on the 20-80 scale), or better.

Even if you’re just casually browsing this article, you probably noticed Uncle Charlie in the second half of the GIF above. It’s McCullers’s best pitch,  and the main culprit of his absurd,13-plus-batters-per-nine strikeout rate this season. He seems to have good feel for it, and throws it both ahead and behind in the count.

One reason evaluators have labeled McCullers a late-inning reliever, as opposed to a starter, is the perceived lack of a third pitch. I haven’t many changeups from him, but I found this one below and it does not -- I repeat, does not -- look like a 40-grade pitch.

The above video is from earlier this season, and McCullers is facing off against one of the minors' best hitters, the Rangers’ Nick Williams. Although the Color calls the first pitch a breaking ball, it doesn’t look like it. The second pitch, however, is the one I’m concerned with. It’s the cambio, and a filthy one. The fact that it induces a swinging strike, from a hitter with strong contact skills, is promising. It fades and changes speeds well enough to keep Williams off balance. If you've heard the phrase "flashes plus" before, apply that here.

In terms of his delivery, the first thing I noticed when watching McCullers this year versus last is his set-up. In previous years, he triggered his wind-up by moving his glove from underneath his shoulder to in-front of his face (see here), before tilting back, along with his shoulders, towards second base. This is the foundation upon which a “rock and roll” delivery is built. (James Paxton and Garrett Richards are contemporary examples of extreme rock and rollers.)

If you watch McCullers now, he has a much more fluid, if not old-fashioned, look to his delivery. (Yes, he’s still got some rock and roll… but now it’s more Chuck Berry than Iron Maiden.) Now he starts his set up at the waist and brings his hands over his head to initiate his move towards the plate.

Not only is this version of his delivery more aesthetically pleasing, but it also gives him a better chance at repeating (repetition is a key component of both command and control). If you pay close attention to the hyperlinked video, you can see McCullers’s delivery functioned in two different gears — slow and deliberate, then fast and uncontrolled. The shoulder sway and tilt *seems* like an attempt to kick his momentum into gear. In contrast, the footage from his last start bears a more fluid, simple timing pattern. And, simple is good. The rule of thumb is: the easier the timing pattern, the easier it is to repeat.

There are still reasons to be less than optimistic. The tweaks mentioned above offer a simple explanation for some of the gains he’s made in strike-throwing ability, but that doesn’t necessarily mean he’ll ever have above-average command in the major leagues. The reason — McCullers, especially during his leg lift, still tilts and sometimes over-rotates his shoulders, which makes it difficult to find a consistent release point. I no longer see the extreme crossover delivery mentioned in the Baseball America capsule, although, admittedly, it’s difficult to tell from the off-center angles I've been afforded. To me, it looks like he’s directing more energy towards home plate.

I don’t know exactly what to expect from Lance McCullers Jr., but I do think the Internet’s preseason scouting reports are outdated. He has excellent stuff, and anyone with electric pitches is worth clicking that "open window" icon on MLB.tv for. The elephant in the room, for fantasy owners, is the Astros operate a tandem-starter system for their minor league pitchers. This means the team designates two starters per game. The first starter, ideally, pitches to the sixth and the second starter goes the rest of the way. The result is McCullers has never pitched into the seventh inning in his career, and it's unlikely the Astros will suddenly let him go seven frames per game. It will be interesting to see how he's handled at the big-league level, but don't be surprised if most of his outings are of the five-inning variety, even if he's pitching well.