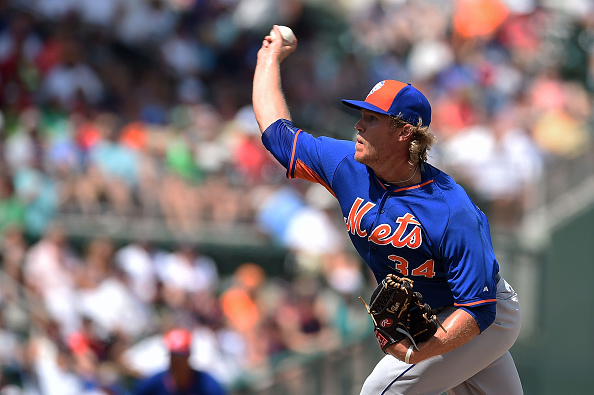 The minor league season is fully underway and the wheat has already begun to separate from the chaffe. Two top pitching prospects, Noah Syndergaard and Jonathan Gray are getting knocked around the PCL, Alexander Reyes continues to strike out two batters per inning, Blake Snell hasn't allowed a run and Carlos Correa just keeps on hitting doubles. There's plenty more, and a lot can change in even a day this early in the season. Before look at a snapshot of the week's performances, we'll take a quick look at Noah Syndergaard, who made his first two starts of the season this past week.

In the Spotlight: Noah Syndergaard

Noah "Thor" Syndergaard began the season ominously, as reports surfaced that he was dealing with "forearm stiffness" during spring training. The ailment wasn't severe, however, as his first Triple-A start was only pushed back a few days. He debuted Monday against Sacramento RiverCats (Giants) on Monday and looked pretty much like the same ol' Syndergaard we saw last year: blistering fastball, hammer of a curveball, good control, spotty command. I watched the game on MiLB.tv and, all in all, I was encouraged by the outing. One of the biggest knocks on Syndergaard is he has a tendency to get too much of the plate with his fastball. Not only leave it up, but it’s also often in the middle of the plate. If anything, Syndergaard looked too hittable Monday, which is reflected in the seven hits he allowed to a prospect-bereft RiverCats lineup.

Yesterday (Saturday 4/18), Syndergaard made his first home start against the Fresno Grizzlies (Astros). I wasn't able to watch the start, but the game recap suggests that Syndergaard was probably better than boxscore suggests. He held the Grizzlies to just a single through three scoreless, before allowing a walk to outfielder Preston Tucker and two-run home run to prospect Domingo Santana. Again, I didn't watch the start, but the five walks he issued tell us his control was probably shaky. (In fact, when he exited with two outs in the fourth inning, he had already eclipsed the 80-pitch mark.) Much like Colorado, Las Vegas has extremely thin air, and while the Park Factors aren't crazy at Cashman Field (Las Vegas, Nev.), it's fair to say the high-desert environs are responsible for at least some ball trickery.

Syndergaard had by far the worst season of his career in 2014, posting a 4.60 ERA in a full season at Triple-A (133 IP), but his defense-independent-pitching (DIPS) numbers suggest it was a fluke: 3.18 FIP, 3.21 SIERA. Anecdotally, his .382 BABIP was by far the highest of any pitcher in the PCL who threw at least 100 innings. There will likely be an opening in the Mets rotation at some point this summer, and when the time comes, the Mets will have to decide between Thor and Las Vegas rotation-mate Steven Matz. Fortunately for Syndergaard, Matz didn’t gain any ground on him this week, giving up three runs on five hits with five walks during his last start.

If we think back to 2013, there was a remarkably similar narrative that played itself out in Las Vegas. Top pitching prospect Zack Wheeler posted a 3.93 ERA (4.04 FIP) in 68 2/3 innings in Las Vegas, to great worry, before making a successful debut in New York that summer. For an organization with a growing reputation for developing pitchers, maybe the solution would be for the Mets to move their Triple-A team back to the International League — they were in Buffalo, NY until 2012. The injury and poor out-of-the-gate performances for the big righty seem to be supressing his fantasy stock. However, I think (a) it's much too early to draw any hard-and-fast conclusions and (b) Las Vegas may be brewing pot of black magic anyway, and (c) his stuff looks pretty much the same as before. If someone in your league wants to sell low, I'm still buying.

In High-A, we find a number of the same names from last week, specifically, Blake Snell and Alex Reyes. As I mentioned in the introductions, Snell hasn't allowed a run and has notched 18 k's in just 11 innings. Hold your horses, though. At 22, he's just a year younger than the average player in the Florida State League (23.5, per Baseball America) and the same age as Noah Syndergaard, Archie Bradley and Carlos Rodon, who are all in the major leagues or Triple-A. The Florida State League is also notoriously pitcher-friendly, so it's probably best to wait until he's promoted to Double-A Montgomery before we crown him a legitimate breakout story. Reyes... oh man. What is there to say, other than, he has some of the most electric stuff in the minor leagues. Twenty strikeouts in 10 1/3 innings. Ab-surd.

The Mariners' Edwin Diaz has been the Cal League's best pitcher to start the season. He's made two starts, hasn't allowed a run, and has struck out 16 batters in just 11 innings. He's mostly fastball/slider, and due to his skinny frame, scouts have been split on whether or not he's more likely to pave a major league career as a starter or reliever.

Eighteen year old phenom Julio Urias was the talk of Double-A this week, striking out 10 batters in just 5 2/3 innings. Scouts think Urias could pitch in the major leagues right now, at an age where most kids are just barely graduating from high school — he doesn't turn 19 until August. With Urias it's important to remember that while he's an absolute phenom, the general consensus is that his ceiling is that of a number two starter, not a true ace. He could reach the majors as soon as 2016, and be the youngest player in baseball for a number of years.

Manuel Margot es En Fuego. He's continued his assault on the Carolina League, hitting his first home run of the season last Monday. As you can see in the video above, he hits it over the left field bleachers. Out of the park, presumably. Perhaps the most notable part of Margot's hot start is, that unlike most of his peers, he's yet to strike out (32 PA). Bradley Zimmer continues to rake and is showing he has the requisite power/speed ability to whet the appetite of fantasy owners. As an advanced college bat, he's likely to move up to Double-A Akron.

Carlos Correa now has eight doubles and a home run in nine games at Double-A Corpus Christi, bringing his triple-slash to a robust .351/.442/.649 for the young season. Yes, he's only 20 with limited experience in the upper minors, but if he just rakes and rakes and rakes, it will be tough for the Astros to hold him down. Fellow 20-year-old Corey Seager has unequivocally been the minor league's best hitter in the early, collecting 19 hits in 37 AB (.514). Third base is a mess in Los Angeles, with Hector Olivera unable to get a visa and Justin Turner and Juan Uribe struggling to stay on the field. It probably won't happen soon, but there's a chance Seager gets his first taste of the big leagues in 2015.

Blake Swihart raised his season average to .406 on Saturday by collecting four hits, including an RBI double. Swihart hasn't gone yard yet, but his three doubles suggest he's hitting the ball with authority early in the season. With Ryan Hanigan and Sandy Leon taking the reps behind the plate in Boston, so Swihart figures to be one of the season's early call ups. It's likely, however, that Swihart will split time with Hanigan upon being recalled, limiting his fantasy value. Sound familiar? That's because Hanigan split time with another uber-catching prospect in Cincinatti for a few years: Devin Mesoraco. Don't forget about him, even if he disappoints in 2015.