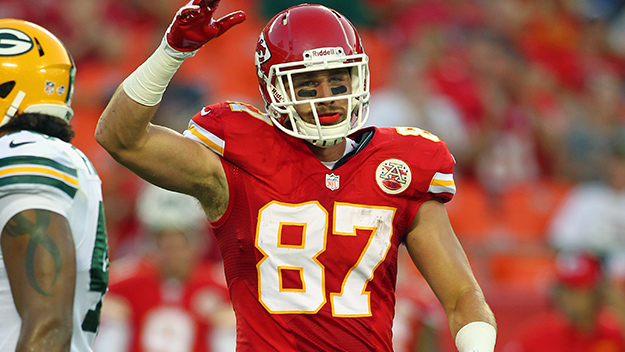 We are on to Week 10 so it is time to take a look ahead at the different price points on both Draftkings and FanDuel this weekend. It is important to find the most productive players every week, but you also can't afford to overpay for the production that you will receive.  We are just over half-way through the season so big performances from the previous weeks are not causing as big of jumps in the pricing.  Each site has their own method for pricing.  Draftkings tends to be more aggressive on moving their pricing up and down based on what we have seen so far this year, while FanDuel has been a little more conservative and even overpricing some players based on historical numbers the player has produced, not just this current season.

It seems both of the major DFS sites have plenty in common for overpriced quarterbacks.  Tony Romo, Matt Stafford and Ryan

Tannehill all appear to be too expensive to use.   You would have to be insane to use Tony Romo in DFS this coming week if he can play.  Romo is $7,500 on Draftkings and $8,100 on FanDuel.  Romo is a tough SOB but if he manages to get on the field the Cowboys will be very careful with him and force feed the running game.   Matthew Stafford will get Calvin Johnson back this week but I want to wait and see if Johnson is healthy to go along with facing a tough Dolphins Defense right now.  Stafford is $7,100 on DK and $8,500 on FD.  Ryan Tannehill has been on a roll which has seen his price jump to $7,400 on DK and $8,000 on FD. Tannehill will travel to face the Lions who have been dominant up front.  I would expect the Lions and Dolphins to be in a close game but not too many points to come by.

When it comes to the values on QB, I never thought in a million years I would say roll out Mark Sanchez but pigs fly I guess. Sanchez is $5,400 on Draftkings & $6,600 on FanDuel which makes him a steal.  Sanchez will play the same if not better than NIck Foles had been playing.  He is the start of the week while some other values include Ben Roethlisberger, Matt Ryan, Carson Palmer and Colin Kaepernick.  Roethlisberger is $7,500 on DK after throwing 12 TD's the last 2 weeks.  Big Ben now gets the Jets this week and I don't expect you will find his value quite so nice next week.  Draftkings seems to not change the pricing much on guys who have played on Sunday and Monday nights so you can get some nice value at times.  Ryan who is $6,300 on DK faces the putrid Tampa Bay defense so Julio Jones could be running free all day. Palmer is just a steady option who throws 300+ yards and 2+ TD's every week.  He takes on the Rams pass defense who struggles against the pass for a price tag of $7,900 on FD.  Kaepernick is $7,500 on FD after some struggles last week.  Kaepernick will need to air things out to keep pace with the Saints this week

There are two names that lined up on both sites to be overpriced.  It starts with Mark Ingram who is $5,900 on Draftkings & $7,600 on FanDuel.  Ingram faces a tough run defense this week in the San Francisco 49ers.  He has done a nice job the last two games but that is in part due to no healthy RB's.  Sean Payton never commits to just one running back for more than just a game or two.  Ingram is best avoided.  The second one is Andre Ellington who is $7,300 on DK & $8,100 on FD.  Ellington has been highly productive the last few weeks but really does struggle in short yard situations and is due to leave a game in the first quarter with an injury.  Some other overpriced players include Denard Robinson at $5,100 on DK and LeVeon Bell at $8,700 on FD.   Robinson has managed to break a some longer runs the last few weeks to make for some decent stats but he is not an every down NFL RB.  Bell has seen his rushing attempts diminish a bit and only saved a terrible game last week thanks to a receiving TD.   Bell just does not have the utilization rate needed in the redzone to have that high of a price based on FanDuel's scoring system works.

LeSean McCoy is still a steal this week and gets the Carolina Defense on Monday Night.  McCoy is $5,600 on Draftkings and $7,700 on FanDuel.  It was bad luck that McCoy did not find the endzone last week but he looked good in the game vs. the Texans. McCoy continues to get pieces back of his offensive line and will be a monster the rest of the way.  Some other values include Jamaal Charles who is $6,400 on DK, Marshawn Lynch $6,700 on DK, Justin Forsett $6,500 on FD and Ronnie Hillman $7,400 on FD.  Charles is not as dominant as last year but always seems to find the endzone.  Lynch got on track last week with a couple of TD's and faces the putrid Giants defense.  Forsett is not a fantastic value but with getting 15 to 20 touches per game and a lack of other cheap RB options on FD he makes the list.  Ronnie Hillman salvaged his day last week with a receiving TD and some catches but he gets the horrific Oakland run defense this week.

Tampa Bay.  Evans is at $5,900 on Draftkings and $6,600 on FanDuel which seems to be high based on what can be expected this weekend.  McCown really struggled early this season so we will see if the time off helps what has been a bad offense..  I will avoid Evans and Jackson who sits at $5,700 on DK.  Some other overpriced Wide Receivers include Michael Crabtree at $5000 on DK, Golden Tate $8,200 on FD and Allen Robinson $6,400 on FD.  Crabtree is just not the same player these days and the 49ers offense has been very inconsistent.  Golden Tate will likely see less involvement with the return of Calvin Johnson so it will be weeks before he falls down to fair market value.  Allen Robinson plays for a horrible team with an offense that lacks any real idea what they are doing.

Antonio Brown needs to be priced higher on Draftkings.  Brown is $8,700 and easily the most guaranteed points in DFS right now.  There are a pair of wide receivers who are really nicely priced on both sites.  Julio Jones is $6,600 on DK & $8,000 on FD while Kelvin Benjamin is $4,200 on DK & $6,700 on FD.  Jones should light up the Tampa Bay secondary and while Benjamin has struggled with drops he is the main piece of the offense.  There is too much upside not to play him at those prices.  The last two to mention are Mike Wallace who is $4,700 on DK and Brandon Marshall $7,300 on FD.  Wallace been quiet lately due to game situations and Marshall should get it going in the 2nd half of the season.

There are two tight ends that appear on both sites to be overpriced.  Travis Kelce is $5,100 on Draftkings & $6,200 on FanDuel and Jason Witten is $4,600 on DK & $5,800 on FD.  Kelce had a nice game last week but just does not see the field enough to be worth the higher price.  He was be nice option at $1,000 less that he was last week on each site, but not at these prices.  Witten is not even close to being a central part of the Dallas offense.  The Cowboys are a run first team so anything Witten catches is just random these days.

It is nice to have Jimmy Graham back at full strength.  Graham is $6,300 on Draftkings which makes him a must play.  Julius Thomas is an affordable $4,900 on DK if you need to go down a bit from Graham, but if you really need cheap then look at Owen Daniels.  Daniels is $3,300 on DK & $5,400 on FD.  Daniels was amazingly able to play last week after knee surgery less than 2 weeks ago.  He should be healthier this week and is a decent part of the passing game for Joe Flacco