Back to the Future: Predicting the performance of the prospects 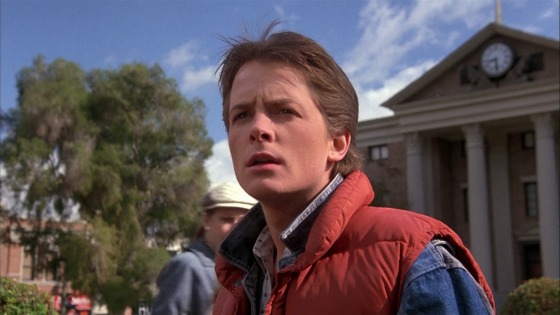 Like Marty McFly, call ups to the majors are young, innocent and just want to be ballplayers.  In Marty’s case, he just wants to be a musician. Back to the Future is the story of a teenager (Michael J. Fox) born to a family of misfits: a drunk mother, a wimpy father, a lazy loser brother and an obnoxious sister.  All he has is his music, his girlfriend and his relationship with Dr. Emmett Brown, a crazy scientist (Christopher Lloyd) who invented a time machine using of all things, a DeLorean. A series of wacky events send Marty back to the year 1955 in the DeLorean where he meets the younger Dr Emmett Brown and does everything to get "back to the future" without changing anything in the past that would cause the future to be changed forever. It was brilliantly written & directed by Robert Zemeckis as a trilogy with all three movies written at the same time and shot back to back.  In the second movie, they go thirty-years into the future (now).  In the third movie, they go to the old west (1885).  The movies are perfectly connected and a great escape from life.  No lessons here, just fun.

So watching the Back to the Future trilogy this weekend reminded me of 1985.  As a junior in college, the world was ours for the taking: losing money playing poker every Friday night; parties every weekend and some weekdays; ultimate frisbee every day; and writing computer programs using punch cards stacked in perfect order with one line of code on each card.  The cards needed to be placed in a reader and then created into a program that could be run on a computer (IBM 3090) that was bigger than my first apartment.

That is what the players who come up from the minors this time of year are thinking.  This is fun, but I do have a job to do.  Some of them will surely be soaking it all in and doing the same things we were doing when we were their age: drinking, play cards and chasing women.  Like we did, they will find time for studying hard and getting better at their craft.  So let’s take a look at them and categorize them. We won’t include any of the great prospects who have been hurt: Byron Buxton, Archie Bradley, Noah Syndergaard and Miguel Sano for example, but let’s peek in on the talent that has arrived or will arrive shortly.

George Springer – OF Astros: Springer came to the majors earlier than expected and “Great Scott” he has performed like everyone expected.  He is gone in every type of league, but if you were smart enough to have drafted him and reserved him before he hit the scene, you are reaping the rewards.  His batting average and lack of running is concerning, but you cannot complain about the monster power he has displayed with 12 home runs and 35 runs batted in with only 183 at bats.  I remember Jeff Mans talking about his call up and saying that even though he didn’t play until the Astros 17th game, he could lead the league in strikeouts.  He has 67 already ranking him 11th in the league with only Tyler Flowers having fewer at bats and more strikeouts.  Troubling going forward, but the power is real.

Gregory Polanco – OF – Pirates: Polanco is ready and able to be with the big club.  Right now they are holding out because of the super-hot Josh Harrison who is batting a ridonkulous .467 in the last two weeks.  Polanco is raking in AAA with .347 batting average and a .945 OPS.  He has seven home runs and 15 stolen bases and counting numbers of runs batted in and runs scored that will get him above 100/100 for the season.  As of this writing, he had not been called up, but it will happen any day and you should invest.

Andrew Heaney – SP – Marlins: Simply put, this guy is ready.  He has walked only two guys this year while striking out 27.  He holds a 10.6 K/BB rate this year.  He has performed at every level of the major leagues.  He is 3-0 and scattered five hits over six innings yesterday.  With Jose Fernandez out for the year and the Marlins being three games over .500 in a dead heat for the NL East.  There are potentially two spots in the rotation that Heaney could grab either of.  Jacob Turner has struggled and Randy Wolf is 37 years old and could be a lefty out of the pen.  The Marlins may wait for an injury, but this kid is R-E-A-D-Y.

Javier Baez – SS – Cubs: No one is more excited about when this young man makes his debut.  He is not ready for the major leagues, but his talent tells me that he will be by late this season.  He is a player that you should only go after in keeper leagues now as the Cubs have no reason to push him to the major leagues.  He struggled for the first six weeks of the minor league season possibly disappointed that after a GREAT spring, he did not go north east with the club.  He has turned it around and has brought his average up to .230 with eight home runs and eight stolen bases.  He has a whopping 70 strikeouts in only 183 at bats.  This is the new major leagues.  As long as he takes some more walks and hits for power, players like this will stick.  See Springer comma George above.

Marcus Stroman – SP – Blue Jays: This weekend I was on a radio show and the host asked me about Stroman who had pitched on Friday.  I had seen the outing and the boxscore, but often find it hard to get too excited about pitchers after only two outings.  You need to wait to make sure they will perform. Well, looking at it…he has.  For many young pitchers it can be about finding the right role to fit you.  Stroman has now been installed in the Blue Jays’ rotation with his first start on May 31st.  In two starts, he has allowed 12 hits in 12 innings, two earned runs, walked only two and struck out 13.  This is a band wagon to get on.

Joc Pederson – OF – Dodgers: The power/speed combo rules in fantasy baseball and this guy can hit for power and run.  He hit 22 home runs last year and stole 31 bases.  He is on his way again this year but with more power.  He has 16 home runs and 13 stolen bases in half the at bats he had last year.  With the injuries mounting in the Dodgers outfield, we could see Pederson in Los Angeles real soon.  He has played at all three levels which we like to see and could stick when he comes up while Carl Crawford deals with injuries.  He will be a good major league player.

“What are you looking at, butthead?”

Jon Singleton – 1B – Astros: Singleton possesses a huge frame at only 6 foot 2 inches tall, but weighing 255 pounds.  He is not ready for prime time.  His power swing is drawing attention, but that is the only time he is driving in runs.  He has only walked once, so he needs some time to get things right and it is too risky to bank on him for 2014.  He is a great power hitter, but needs a better feel for the strike zone before he will perform at this level.

Eddie Butler – S – Rockies: Butler has been great at all levels of the minor leagues, but he has a lot of obvious things against him for 2014.  He jumped from AA to the majors.  This is traditionally a really hard jump.  I always like to see a guy spend a little time at each level.  It can be in the same season for the great ones, but anytime there is a jump, there is a big difference in simple understanding of how things work.  In Butler’s debut, he was clocked at an average speed of 95 MPH, but his location was off by a tiny bit and the Dodgers didn’t miss the tiny mistakes.  At AA, he gets away with those.  At AAA, he gets away with half of them.  Bad team, too soon, no thanks.

Maikel Franco – 3B – Phillies: The main problem here is the mix of talent and opportunity.  Most of the time, we see great talent blooming without opportunity.  In this case, this young man has every opportunity in the world.  Cody Asche has been bad and is hurt.  Reid Brignac is a defensive shortstop who is forced to play third base.  Reid is hitting the same as Franco: .216.  Everyone in Philadelphia wants to see their top prospect in the majors as they call the bottom of the standings home with 25 wins and 36 losses.  Can you say Fernando Martinez?

“Wait a minute, Doc. Ah... Are you telling me that you built a time machine... out of a DeLorean?”

Well, again this is just one guys opinion.  You should send your opinion on twitter to @RickWolf1 or @FantasyAlarm.  You can write to me directly (about anything) at rick@fantasyalarm.com or you can post in the comments below.  One point about these young players if you play in a redraft league is that you need to be mindful of the teams they are on.  A team like the Astros will likely allow their young players to play since they have to find out about them and showcase them for potential trades in building their organization.  Teams like the Yankees are less likely to play the young players when their goal EVERY year is to win and not groom young players. So if you decide to bank on too many young players, I leave you with the words of George McFly…

“Last night, Darth Vader came down from Planet Vulcan and told me that if I didn't take Lorraine out, that he'd melt my brain.”