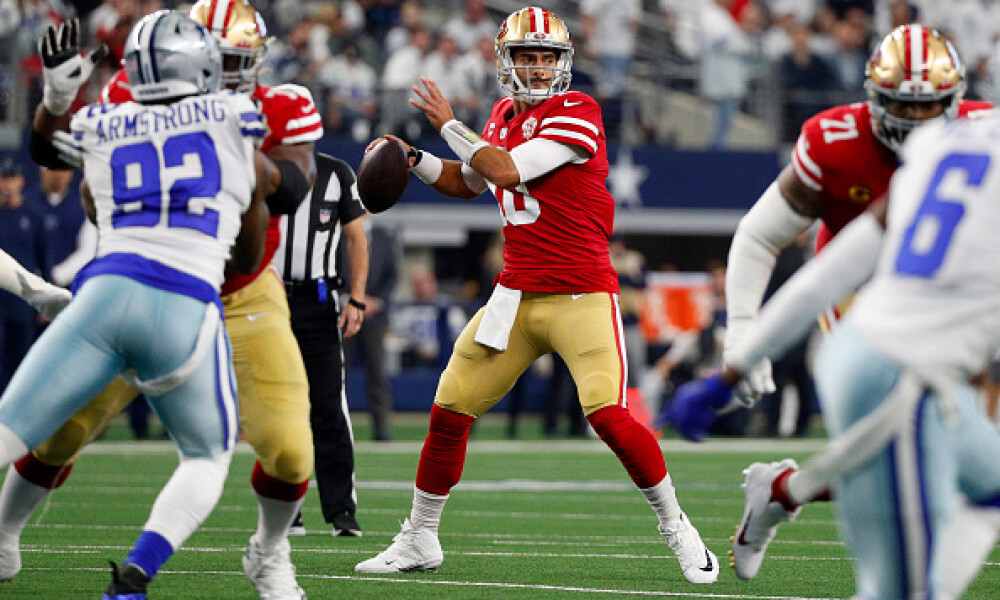 By no means do I want to be a jinx here. After the season we have had, far from it in fact. But we also must pass along information, and aside from a few backfields in flux, there aren’t too many serious situations we need to be aware of from an injury perspective.

Let’s jump in, and get ready for one of the best weekends of the year with four playoff games to enjoy.

Despite the fact Jimmy Garoppolo isn’t exactly the picture of health these days, he is entering Saturday’s game in Green Bay without an injury designation. While we don’t have to worry about his status, it’s still hard to feel confident in him for this week even though he’ll likely be busy trying to keep up with Aaron Rodgers. His thumb will continue to be an issue for as long as the 49ers are still in the playoffs.

Speaking of Rodgers, the Green Bay quarterback practiced in full on Tuesday, and it appears we can move past talk of his toe injury. With that being said, even when it was an issue, you would have never known it from Rodgers’ performance.

At this point, it appears that things will go right down to the wire with Tampa Bay’s running back situation. Despite still being on Injured Reserve, Leonard Fournette practiced both Wednesday and Thursday, and at this point things do appear to him being active on Sunday. With Ronald Jones not practicing due to his ankle injury, at this point I would plan for him to miss another week. Last week both Giovanni Bernard and Ke’Shawn Vaughn played key roles, and if Fournette doesn’t play I would expect that to continue. If he does make his return, then Bernard should still have a supporting role, and I wouldn’t read much into his reps being limited thus far in practice this week.

Based on what we are seeing in practice so far this week, things are trending towards the return of Clyde Edwards-Helaire with Darrel Williams being sidelined as the former practiced Wednesday and Thursday while the latter didn’t. Jerick McKinnon stepped up last week to fill the void, and if Kansas City is short-handed, I would expect to see that continue. With that being said, it will be hard not to favor Edwards-Helaire out of the Chiefs’ running backs, but I would stay away if you have all eight teams at your disposal.

While Tennessee hasn’t confirmed anything, Derrick Henry has been increasing his workload in practice and things are trending in the right direction for him to make his return as he has been taking contact. If he does take the field this weekend, it’s hard to ignore Henry in what should be a favorable matchup. And if not, then back to D’Onta Foreman we go.

The 49ers have shown no qualms about riding Elijah Mitchell when the rookie is healthy this season, so it’s good news that he practiced in full on Wednesday. The only problem though, is the fact that San Francisco very well could be trailing and it could take the run game out of the equation. However, a healthy Mitchell is still one of the better options this week.

It’s not the best thing for Aaron Jones value that there is a timeshare, albeit slanted in his favor, in place in Green Bay’s backfield between him and AJ Dillon. With that be said, Jones appears to be fully healthy and ready to go for this weekend’s action.

Breshad Perriman didn’t practice Wednesday or Thursday while dealing with the same hamstring injury that was also a factor last week. Another receiver, Cyril Grayson, continued to be held out of practice while dealing with a hamstring injury, and it’s hard to trust many Tampa Bay receivers other than Mike Evans. With Perriman and Grayson limited at best, but likely sidelined, Scotty Miller gets a boost this week.

With Marquez Valdes-Scantling likely out with a back injury this week, Randall Cobb is slated to step back into the lineup as the third receiver for Green Bay. Cobb hasn’t played since Week 12 after core muscle surgery, and considering the comfort level is already there with Rodgers, he could be a sneaky option.

There isn’t much to see from a fantasy perspective, he didn’t have a catch last week, but Ben Skowronek was limited in practice on Thursday with a back injury and his status is in doubt for the weekend.

By the same token, the fact that Stanley Morgan is questionable with a hamstring injury shouldn’t have much, if any, fantasy impact for Cincinnati.