Steve Pimental gives an update on the WNBA preseason and it's players. 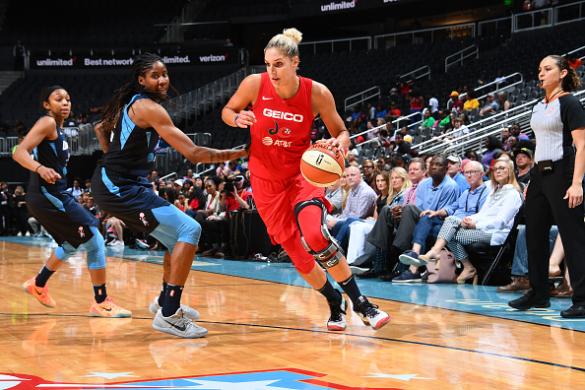 It seems like a lifetime ago that the WNBA had its most exciting offseason ever, with nine former All-Stars changing teams and several contenders adding significant pieces to try to chase a title. For a refresher on all of the excitement from the offseason, be sure to check out my offseason breakdowns for each team as well as my WNBA Draft Recap.

Since the draft, we have had a lot of players opt out of the Wubble due to injuries, COVID concerns or to pursue social justice. While the league and their teams will feel these absences acutely, they also open up opportunities for other players to get more minutes and shots, which will be huge for DFS. With that in mind, let’s look at the most notable players who will be missing this summer and how we expect their teams to adjust.

After the draft, it looked like Connecticut would have the best starting lineup in the league but one of the weakest benches. Both units took a big hit with Jonquel Jones sitting out this season. For fantasy, there should be more shots for starters Briann January, Jasmine Thomas, Alyssa Thomas and DeWanna Bonner. Whoever wins the fifth starter job will be interesting for fantasy, especially if you get Theresa Plaisance stretching the floor. Connecticut has some promising young players off the bench with rookies Kaila Charles and Beatrice Mompremier joining Natisha Hiedeman and Bria Holmes, but it will be hard to count on any of them right away for fantasy. Hiedeman probably has the highest upside of that group, especially considering the promise she flashed at times as a rookie last season.

The Aces were already short on outside shooting before Kelsey Plum suffered a season-ending Achilles injury. Her absence should guarantee Jackie Young will stay in the rotation and likely in the starting lineup. Young wasn’t asked to do much as a rookie, but she should get more opportunities in her second year.

Young will split point guard duties with Danielle Robinson, and they could both start in a three-guard lineup with Kayla McBride. The Aces added backourt depth with Alex Bentley and Sugar Rodgers, and while they are solid players, they are unlikely to do much for fantasy.

With Liz Cambage out, A’ja Wilson gets the keys to the offense, while Dearica Hamby should get to start after being named Sixth Woman of the Year last season. Angel McCoughtry is the great unknown for this team. The former MVP will be 34 in September, and she has sat out two of the last three seasons, missing 2019 following knee surgery. Her scoring will be needed with Cambage and Plum out, but it will be asking a lot for her to average 20 ppg again this season.

The other thing to watch for Las Vegas is their lack of frontcourt depth. They did bring back Carolyn Swords, but they may be better off playing Wilson more at the five with McCoughtry at the four and leaning on their backcourt depth.

Washington’s frontcourt depth was one of their strengths last season, but that strength will be tested with their entire starting frontcourt, and their starting point guard, all out. As I noted in my Mystics offseason breakdown, Washington had six bigs average more than 0.90 fantasy points per minute last season. With two of them gone, Emma Meesseman, Tianna Hawkins, Aerial Powers and Myisha Hines-Allen are all potential value plays. Even former number three overall draft pick Alaina Coates is interesting for fantasy, despite being on her fourth franchise since she was drafted in 2017.

Of course, the biggest name to watch in the frontcourt is Meesseman, who was named to the All-Star Team in 2015 and was the WNBA Finals MVP in 2019. The offense will fall squarely on her shoulders, and she has a chance to be an MVP candidate as a result. Whoever starts next to her in the frontcourt will likely be a must-play for fantasy.

The backcourt, however, is a bit harder to figure out. Ariel Atkins should get plenty of minutes and shots, but it remains to be seen how much of the load she can carry offensively after her PPG actually dropped in her second WNBA season. Leilani Mitchell proved last season she can step up and carry a depleted team, and while I expect her to do that again, you will likely have to pay full price in DFS. Behind them, you’re looking at 12-year vet Essence Carson, whose best offense is well behind her, second-year player Shey Peddy who has 71 career WNBA minutes, and rookie Kiara Leslie. Fourth-year wing Aerial Powers could see a ton of minutes at the two and the three.

The Sparks added Kristine Anigwe, Te’a Cooper and Reshanda Gray to fill the vacant roster spots. Gray will likely be the first big off the bench, but Angwe and Marie Gulich should be involved as well.

Losing two All-Stars should be a big blow to any team, but it may be less of a blow for the Sparks. Even though Anigwe and Gray are not as good as Chiney, they are good enough for the role she was playing. Chiney only played 19 minutes all of last season with both her sister and Candace Parker, and if Derek Fisher was going to continue to refuse to play those three together, losing Chiney is less of a blow.

The Sparks are in a similar situation with Kristi Toliver. She is a good player and they would love to have her, but they still have Brittney Sykes, Riquna Williams, Tierra Ruffin-Pratt, Seimone Augustus, Sydney Wiese and Cooper to fill the wing minutes. A lack of shooting could be an issue, but they should still get quality minutes from that group.

Astou Ndour shined brightly last season after Jantel Lavender went down with a season-ending injury. Ndour is gone this season, but another tall, young big with three-point range will have a chance to thrive while Lavender misses 2020 following foot surgery. Azura Stevens should have every opportunity to nail down a rotation spot, and she may even have a chance to start ahead of Cheyenne Parker. Rookie Ruthy Hebard could be ready to be the fourth big, even with an abbreviated training camp, but Gabby Williams would likely get more minutes at the four if she is not. All four of those players have DFS upside thanks to the minutes vacated by Lavender. As for the Sky, they should be just fine so long as they don’t suffer another significant injury to their bigs.

The Dream’s playoff chances took a significant hit with Tiffany Hayes and Renee Montgomery out. The silver lining for fantasy is that Courtney Williams and Chennedy Carter should get all of the minutes and shots they can handle. Head coach Nicki Collen could try to stagger their minutes so that one of them is on the court at all times.

Behind Williams and Carter, Atlanta is awfully thin. Betnijah Laney is great defensively but provides nothing on offense. The Dream will hope fourth-year guard Alexis Jones can make a leap in her first real opportunity after she was buried on the depth chart in Minnesota and Los Angeles. She is a 33.9 percenter career three-point shooter, so if she can space the floor and be in the right place on defense, I think Atlanta would gladly take that.

The Liberty have Amanda Zahui B., Kiah Stokes and five rookies in the frontcourt with Rebecca Allen and Han Xu out. Stokes is a solid rebounder whose offensive limitations have kept her from starting consistently. Rookies Leaonna Odom, Kylee Shook, Megan Walker, Joyner Holmes and Jocelyn Willoughby all have fantasy upside, but it’s hard to trust any of them, even if they start next to Zahui B. Zahui B. will have every opportunity to thrive with Tina Charles gone, but it remains to be seen if she is ready to face the other team’s best post defender day in and day out.

With Durr and Marine Johannes out this season, Layshia Clarendon should see plenty of minutes both next to Ionescu and backing her up. The only other guard on the roster is rookie Jazmine Jones, which could limit how often new head coach Walt Hopkins is able to play Clarendon, Ionescu and Kia Nurse together. The future looks promising for this team, but Ionescu, Nurse and Amanda Zahui B. will likely all have to play great just for this team to have a shot at the playoffs.

While Zandalasini’s absence provides some clarity in the Minnesota Lynx backcourt, it also limits their upside. Rachel Banham, Lexie Brown and Shenise Johnson figure to split most of the guard minutes, though rookie Crystal Dangerfield could be part of the rotation from day one. Brown is one of the best shooters in the league, and if she can add some ball-handling and shot creation to her game, she could have a breakout year. Likewise, Rachel Banham will have a chance to show what she can do with the ball in her hands after years as a backup in Connecticut. I trust head coach Cheryl Reeve to get the most out of this backcourt, but it may take a while for things to come together.

NBA Russell Westbrook (rest) out on Wednesday vs. Pels

NBA Kemba Walker unlikely to play in B2Bs all year