Steve Pimental does a deep dive into the WNBA offseason of the Los Angeles Sparks, including their acquisitions and losses and what the fantasy outlook is like for key players. 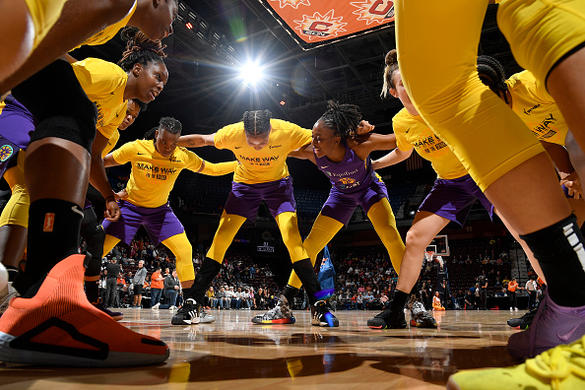 There is no way to look at this offseason as anything other than a slam dunk. The Sparks’ championship window is right now, and they opened it even further by acquiring Kristi Toliver and Brittney Sykes. It cost them a promising young player in Kalani Brown, but Brown was never going to have a significant role on this team so long as the Ogwumike sisters and Marie Vadeeva were on this team and Derek Fisher was the head coach. Candace Parker is 34 this season, and it made a lot of sense for the Sparks to turn Brown into a player who can help them win while Parker is still one of the better players in the league.

Toliver is not known for her defense and Sykes’s defense can come and go, but this team has a ton of talent and unlike the Aces, it appears to fit together reasonably well. I have questions about how Fisher is going to keep everyone on this team happy with their minutes and roles, but the flip side to that is he has a ton of flexibility to match up with opposing teams. This is probably the most talented roster in the WNBA top to bottom.

The Sparks do not have a first-round pick, but they pick eighth and 10th in the second round. The Sparks already have 12 players under contract, and it is doubtful either of their second-round picks will make the team.

We have very little idea who Derek Fisher is going to start, though I feel pretty confident his starting lineup will look very different than what I think it should be. Before we veer too heavily into wild speculation, let’s look at what we do know.

Chelsea Gray and Nneka Ogwumike started every game they played last season, and that almost certainly will not change in 2020. Nneka is a former MVP who is still firmly in her prime while Chelsea Gray thrust herself into the conversation for the best point guard in the league last season. They’re not going anywhere.

Last season, Derek Fisher refused to start Candace Parker at small forward. I thought that was a mistake considering the Sparks were so deep in the frontcourt, and while they still are, they traded Kalani Brown and added to their backcourt depth in the offseason. I am skeptical Fisher will suddenly decide to start Parker at the three now that he has more options there.

Kristi Toliver hasn’t come off the bench in a regular-season game since 2014, and my best guess is that Derek Fisher will start her, at least initially. Toliver is a great shooter who doesn’t need the ball in her hands but can attack off the bounce, and that should make her a great fit for the starting lineup. I would imagine she will get the first shot at starting at shooting guard, but stranger things have happened.

Last season, Tierra Ruffin-Pratt started 33 games at small forward. I don’t know why. She’s a good defender who doesn’t need the ball in her hands, but that doesn’t explain why she averaged a career-high 25.2 minutes per game while playing on one of the most talented teams in the league. Ruffin-Pratt shot a career-high 34.2 percent on threes last season, so it’s not like she’s in the lineup to space the floor. I think there are three or four better options for this starting spot on the roster, but it doesn’t matter what I think. It probably comes down to either TRP, Brittney Sykes or Riquna Williams in this spot, and I am skeptical Derek Fisher will go away from what worked last year until he doesn’t have a choice.

Brittney Sykes has started 57 of 97 career games. She was mostly a starter when Angel McCoughtry was out, and mostly came off the bench when McCoughtry played.  She is still relatively young, and she’s not a great three-point shooter, and I think she would make sense coming off the bench for both of those reasons. Sykes is certainly capable of starting, and she probably belongs in some crunch-time lineups, but there probably isn’t a need to start Sykes over the Sparks’ veteran options.

The last of those veteran options is Riquna Williams. I still cannot believe how good Williams was as a starter last season. She averaged 7.9 points and 21.8 minutes in nine games off the bench, but she averaged 15.2 points in 28.4 minutes per game off the bench. To be honest, I’m tempted to write that off as a fluke. She shot 10.5 percent better from the field as a starter than off the bench, and while I suppose it’s possible she was simply getting better looks when she played with the starters, it’s not like she was just spotting up for open shots all of the time.

I thought Williams was perfectly suited to coming off the bench and providing instant offense, especially on a team with so many good players who demand the ball. I still feel that way, despite what the numbers said last season. I would guess Derek Fisher is at least tempted to keep Williams in the starting lineup, but I don’t know if he will bench Toliver or Ruffin-Pratt to do so.

Much like the Aces, the Sparks had a good offseason on paper but still have the same questions heading into 2020 that they had in 2019. For the Sparks, the question is if Derek Fisher can keep everyone happy and get the most of one of the deepest and most talented rosters in the WNBA.

If 2019 is any indication, the answer is no. Fisher alienated a future Hall-of-Famer and never settled on anything that resembled a regular rotation. Perhaps he has learned from that experience and is better equipped to put his players in a position to win, but it is fair to be skeptical.

The best hope for Sparks fans is that this team is simply too good for Fisher to mess it up. It’s certainly possible. They finished one game out of the second seed last season and four games behind the Mystics for first place. It would be hard to argue that Brittney Sykes and Kristi Toliver don’t make the Sparks at least one game better. If you can grab a top-two seed, you are in a great position to make the WNBA Finals and win a championship.

I just don’t trust Derek Fisher to lead this team. I’m mildly surprised Candace Parker is still on this roster after Fisher benched her in the game that knocked the Sparks out of the playoffs. I suppose it is possible Parker doesn’t have much left in the tank at age 34 years old, but I blame Fisher for not getting the most out of her last season.

Similarly, how will Fisher handle Brittney Sykes? Sykes is considered underrated in some WNBA circles, but she was also a big part of why the Dream struggled with defense and effort for most of last season. I don’t expect Fisher to get better defense or effort out of Sykes than Nicki Collen did.

On top of that, you will have at least two players who are used to starting who will now come off the bench. We cannot possibly know how that will affect this team on and off the court. At the end of the day, I think the Sparks will be on the fringes of title contention at the very least, but I’m not ready to call them the favorites despite what was pretty clearly a strong offseason.

The Sparks have the third-best Championship odds at 9/2. They are behind the Aces and Sun, but ahead of the Mercury, Storm and Mystics. Those odds are probably about right. I might quibble with the teams who have better odds, but I think the Sparks will be better than they were in 2019. The problem is that some of their competitors may be better as well.

At the end of the day, I’m just not betting my hard-earned money on Derek Fisher. We had ample evidence during his Knicks tenure that he is not a good head coach, and last season did nothing to change how I feel about him. If you’re brave enough to throw your money behind him, more power to you.

Last season, the Sparks had 12 players who averaged at least 11 minutes per game, and just two who averaged more than 26 minutes. It is awfully hard to play anyone for fantasy when minutes are so spread out like that.

Gray and Nneka Ogwumike are the two Sparks I would feel best about playing for fantasy, but I think the most we can hope for is for them to repeat their fantasy production from last season. I certainly wouldn’t expect Gray to get more shots with Sykes and Toliver in the mix. Nneka might be in a slightly better situation now that Kalani Brown is gone, but I think her days of averaging 40+ fantasy points are behind her.

Just about anyone on this team outside of Tierra Ruffin-Pratt has fantasy upside if they get enough minutes, but I’m most interested in Chiney Ogwumike, Candace Parker and Maria Vadeeva. All three averaged more than a fantasy point per minute, but they rarely played enough to be really great for fantasy. If Vadeeva can consolidate a rotation spot with Kalani Brown gone, she has a chance to be a useful punt play right away. Vadeeva would be a really great fantasy play if she ever got to start, but even then, we have to be wary of Derek Fisher. In her only start last season, Vadeeva scored 43.5 fantasy points but only played 24.2 minutes.

Chiney Ogwumike averaged 31.7 fantasy points and 28.7 minutes in 14 starts last season, though all of those games were with either Candace Parker or Nneka Ogwumike out. Chiney is an obvious play whenever she starts, but if Derek Fisher was more willing to play her with Candace and Nneka, she could be a solid play off the bench.

Is it too much to hope for that Derek Fisher and Candace Parker had a heart-to-heart in the offseason and Fisher agreed it is dumb to play Parker the same number of minutes as Tierra Ruffin-Pratt? Parker averaged 27.0 fantasy points in 26.0 minutes last season. Her previous career-low in minutes per game was 30.6 in 2018 when she averaged 38.7 fantasy points. Have I mentioned lately that Derek Fisher is a terrible head coach?