Steve Pimental does a deep dive into the WNBA offseason of the Las Vegas Aces, including their acquisitions and losses and what the fantasy outlook is like for key players. 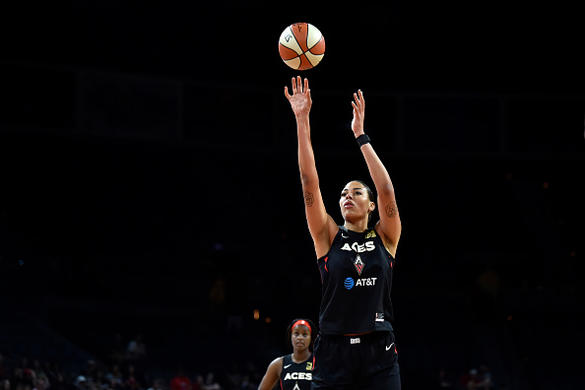 There are at least two ways to look at the Aces’ offseason signings. The first, and seemingly most popular, is that they replaced two replacement-level players (Tamera Young and Sydney Colson) with players who have a combined eight All-Star appearances, thus thrusting themselves to the head of the pack in the WNBA Championship hunt. Truth be told, that was my initial reaction to Vegas’s offseason.

My next reaction was that they took one of the deepest teams in the league that didn’t shoot threes and never quite fit together and turned it into a deep team that will not shoot threes and doesn’t quite fit together. Angel McCoughtry turns 34 years-old in September and missed the entire 2019 season with a knee injury. Danielle Robinson will be 31 when the season starts and is a 12.9 percent career three-point shooter. I don’t think it is a fait accompli that they are better players and better fits at this point in their careers than the players they replaced. The Aces almost certainly raised their ceiling, but that doesn’t mean they will be better in 2020.

One thing the Aces do have in their favor is they probably are not done making moves. They have one or two open roster spots, and if they don’t make a big move around the draft, I suspect they will re-sign Tamera Young. If they do either of those things, I’ll like this offseason a bit more than I already do. 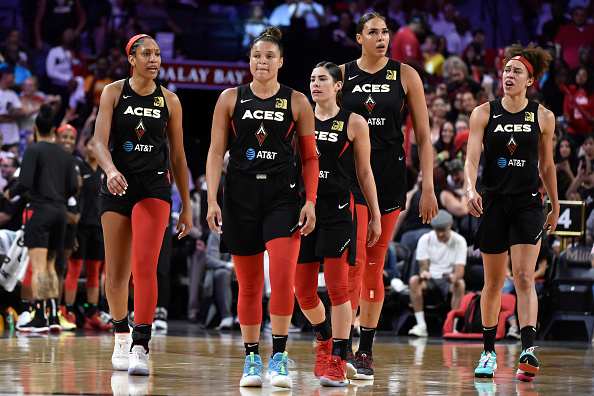 The Aces do not have a pick in the first two rounds, and even though they have some available roster spots, they are unlikely to use one of them on whoever they draft in the third round.

Angel McCoughtry has started 239 games in her WNBA career, and it is fair to wonder how she would respond to coming off the bench. I think Angel would be better suited to a bench role, especially on this team, but I doubt Bill Laimbeer will go to that right away. McCoughtry has probably earned a chance to prove she can stick in the starting lineup, and it could be much easier to send second-year player Jackie Young to the bench than a future Hall-of-Famer.

If this is the Aces’ starting lineup, it will have a ton of questions, chief among them if there will be enough offensive touches to go around. In 2018, Angel McCoughtry averaged 14.0 field goal attempts per game and had a 28.3 usage rate. Both of those were her lowest totals since her rookie season. She would be replacing in the starting lineup a player who averaged 6.9 FGA per game and had a 17.7 percent usage rate. If McCoughtry starts, she will almost certainly take touches and shots away from Kayla McBride, Liz Cambage and A’ja Wilson. That probably won’t be good for the Aces’ offensive efficiency, and it may not be good for their chemistry, either.

If it were up to me, the Aces would keep their same starting lineup from last season, with Jackie Young at point guard, which pushed Kelsey Plum to shooting guard and Kayla McBride to small forward. That lineup is significantly smaller than the proposed lineup with McCoughtry at the three, but as we saw last season, there aren’t many teams who are capable of punishing the Aces for going small. That starting lineup had a 4.7 net rating in 230 minutes in the regular season, which is more than good enough.

Jackie Young was the perfect low-usage player alongside Cambage, Wilson, McBride and Plum. She led the Aces in assists but was sixth in minutes and usage. This is also the Aces lineup that has the most shooting, at least in theory. Young only shot 31.8 percent on threes last season, but she was a 35.2 percent three-point shooter in college. Either way, she’s a better shooter than McCoughtry, who has shot 28.6 percent on threes in her career.

As much as I think Young is a better fit with the starters than McCoughtry, I think McCoughtry is a better fit playing with the bench than Young. If McCoughtry is leading bench units, she will be free to shoot as much as she wants, and she’ll only have to compete with Dearica Hamby for shots. Young has not proven she can carry an offense when the starters sit, and she doesn’t appear to be a great fit next to Danielle Robinson, either. Eventually, you will probably need Young to develop into the kind of lead guard who can carry an offense, but can a team with title aspirations really afford to go through those growing pains this season?

We haven’t even discussed what is probably Las Vegas’s best lineup, with Dearica Hamby replacing Angel McCoughtry at small forward. Hamby isn’t a small forward, but sometimes the best tactic is to just get your five best players on the court and let them figure it out. Cambage, Hamby and Wilson figured it out pretty well last season, with a 15.5 net rating in 62.2 minutes together. Laimbeer leaned even more heavily on that lineup in the playoffs, playing those three together for 80 minutes across five playoff games, good for a 5.3 net rating.

I still think you want to have two of Cambage, Hamby and Wilson on the floor as much as possible, and the easiest way to do that is with Hamby coming off the bench. That being said, I think those three need to play more together, especially at the end of games. If your spacing is going to be bad anyway, you may as well maximize your size and rebounding. I suppose it is possible Angel McCoughtry makes a full recovery from her knee injury and forces her way into playing in crunch time, but I suspect Hamby will once again be one of the Aces five best players. If that is the case, she needs to play next to the Aces other best players, if not in the starting lineup, then throughout the game.

With all of the veterans the Aces have added the last couple of offseasons, it is easy to forget that the core of this team is still really young, with each of the last three number one overall picks. Their best bet for contention is probably for Kelsey Plum, A’ja Wilson and Jackie Young to continue to get better. If Plum or Young can start to play near an All-Star level, that would go a long way towards making the Aces one of the best teams in the WNBA.

Another reason for optimism is that the core of this group gets another year together. Last season, the pieces never quite fit all the way as the Aces tried to adjust to playing with Liz Cambage. Even though they’re adding Angel McCoughtry and Danielle Robinson, there is reason to believe they will be more comfortable together with a full season under their belts.

Toward that end, one of the most fascinating things to watch with the Aces this season is how often Bill Laimbeer goes with his big lineup of Cambage, Wilson and Dearica Hamby. Will Laimbeer have a harder time getting to that lineup while still playing Angel McCoughtry heavy minutes? Would McCoughtry be okay playing the 18.5 minutes per game that went to Tamera Young last season? These are the questions that still haven’t been answered.

It is undeniable that the Aces have a ton of talent, adding two former All-Stars to a team that had already made the semifinals in the 2019 playoffs. They are one of a handful of teams in this league that will not have to give any rotation minutes to below-average players, and that is an asset. If Bill Laimbeer can get the most out of that talent, this team could absolutely win the WNBA title. If they can’t solve their fit and shooting issues, they could get knocked out of the playoffs after just one game. If I had to guess, I’d say the second scenario is the more likely outcome, but we won’t really know until we see the season play out.

The Aces have the best championship odds in the WNBA at 3/1, and I’m not going anywhere near that bet. The Aces were one of the favorites last year after they added Liz Cambage and Jackie Young, but they never seriously contended. Even if you like their offseason more than I do, I’m not sure how you can think they are significantly more likely to win the title than Connecticut, Los Angeles, Phoenix, Seattle or Washington. I would rather bet all of those teams, except maybe Phoenix, before I bet Las Vegas at 3/1.

As we discussed above, this team is loaded with talent, and that applies to fantasy as well as real life. The problem, for fantasy, is that with so much talent, it’s difficult for anyone to get enough minutes or touches to contribute consistently for fantasy. Just about everyone on this team was better for fantasy in 2018 than in 2019, and they all did better when one of the starters, most notably Cambage, was out of the lineup. I fully expect that to be the case again in 2020.

The biggest exception, of course, was Dearica Hamby. She averaged a career-high 25.1 fppg last season, thanks mostly to her 24.8 minutes per game, also a career-high. Even so, her fantasy points per minute actually fell, from 1.07 in 2018 to 1.01 in 2019. Like the rest of her teammates, she is dependent on one of her teammates missing time to reach her full fantasy potential.

While I don’t love any Aces for cash games while the team is at full strength, just about the entire team is good for GPP contests. Liz Cambage is capable of scoring with anybody, as are A’ja Wilson, Dearica Hamby and Angel McCoughtry. Kayla McBride, Kelsey Plum, Jackie Young and Danielle Robinson may not have quite as much upside as their teammates in the frontcourt, but they too are capable of going off in the right matchup.

That being said, we should keep an eye on the young players and newcomers early. If it looks like Kelsey Plum has developed in the offseason or Angel McCoughtry is fitting in with her teammates better than expected, we should be ready to act on that information right away.