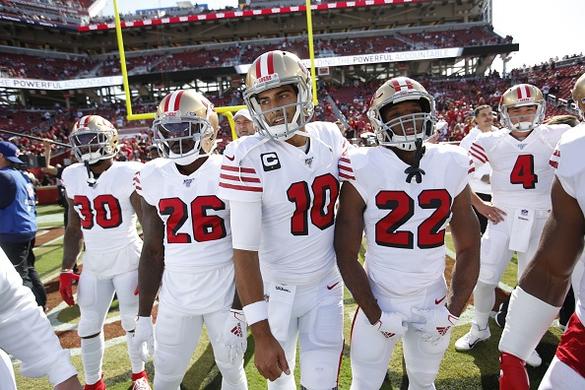 This is the first time all season I’ve put together a single-game SuperDraft lineup, and I wish I would have done it sooner. Between the higher multipliers, the positional flexibility and the addition of kickers, putting together my SuperDraft lineup was a lot of fun. I am tempted to do a cash lineup, and if I did, it would almost certainly have one of the aforementioned kickers, but this felt like a good time to go big or go home.

In addition to aiming for a higher payout, I also wanted to do a GPP lineup because I really, really like the player I chose for my champion, even though it’s hard to trust him for cash. Making him my champion was a great way to go out on a bit of a limb, and know that I will be rewarded nicely if he has a good game like my gut says he will.

Since there is only one game, and we’re playing five guys in a lineup, we’re going to change up the format this week. We’ll run through the guys in my lineup, along with why I like each, before we discuss a couple of other players who nearly made the cut. Next week we’ll be back to our usual format when we’ll try to build upon the very nice start we had last week in our SuperDraft NBA debut. 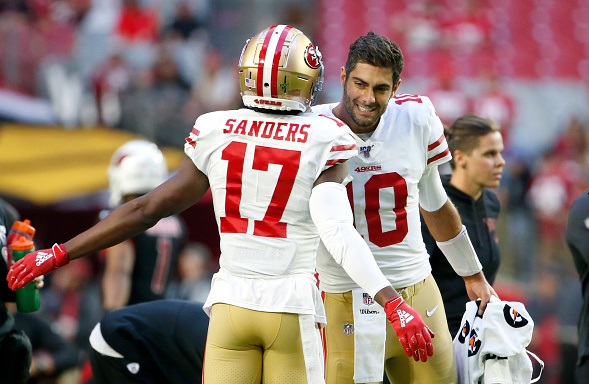 I think Jimmy Garoppolo is going to have a good game, at least for fantasy, and I think Emmanuel Sanders will lead the 49ers in targets, receptions and yards. Sanders has been quiet since his huge game against the Saints, but I think the bye week will help with his nagging injuries, and if he’s healthy, I think he’s a better player than Deebo Samuel.

Garoppolo averaged 16.3 fppg this season, but he has a higher multiplier than Tyreek Hill (13.3 fppg) and Travis Kelce (12.9 fppg). Even if the Chiefs weren’t facing one of the best defenses in the NFL, I would like Garoppolo for our lineup.

It sounds like Tevin Coleman is going to play, though how much he will play is anyone’s guess. With the lone exception of the Divisional Round game against the Vikings, Mostert has been San Francisco’s lead back since Week 13, scoring 11 touchdowns over eight weeks. Mostert may not be particularly likely to top 100 scrimmage yards, but it’d be pretty surprising if he doesn’t score at least one touchdown.

Watkins had at least 90 scrimmage yards in both playoff games, and while I hate the idea of trusting him, it seems pretty clear he’s Mahomes’s third option right now, and that’s worth something.

Kittle averaged the exact same fppg as Travis Kelce this season, and he’s facing a weaker defense than Kelce, but Kittle has the higher multiplier. Kittle obviously didn’t do much the last two weeks, but if Jimmy Garoppolo only throws eight passes this week, my lineup is done anyway. I’ll gladly take the multiplier and hope for a handful of catches and a touchdown.

I never thought I would choose to play a kicker in a format where I didn’t have to, but here we are. I have no idea why Butker’s multiplier is higher than Robbie Gould ’s, but I’m not complaining. Butker may not have the upside of someone like Mecole Hardman, but he is basically money in the bank for 20 fantasy points.

Hardman hasn’t topped 30 yards from scrimmage or scored a touchdown since Week 14 against the Patriots. That being said, we know he has big-play ability, and Andy Reid has had two weeks to cook something up to get him open. 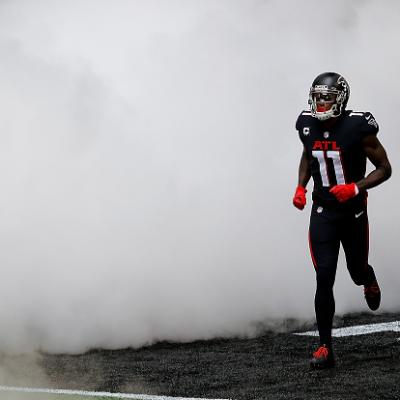 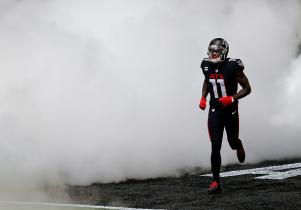 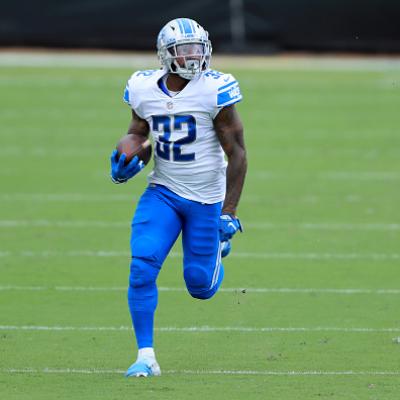 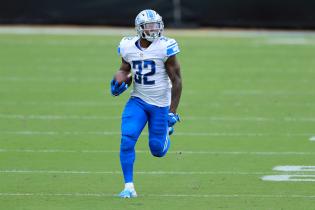 D. Hopkins - WR
ARI1
Cardinals WR DeAndre Hopkins (ankle) was held out of practice on Wednesday.
Hopkins dealt with an ankle injury ahead of Weeks 4 and 5 but ultimately suited up for both contests, combining for 16 targets and over 170 yards. It would be a shock if he is not active in Week 7 against the Seahawks.
Added Yesterday 8:41 pm (EST)
Added Yesterday 8:41 pm (EST)

D. Chark - WR
JAC1
D.J. Chark (ankle) practiced on a limited basis on Wednesday.
This is actually an improvement from one week ago at this time, as Chark was sidelined for Wednesday and Thursday ahead of Week 6. He should be good to go for Sunday's matchup against the Chargers, with the hopes of seeing another 14 targets headed in his direction.
Added Yesterday 8:04 pm (EST)
Added Yesterday 8:04 pm (EST)

B. Perriman - WR
NYJ1
Breshad Perriman (ankle, knee) was limited for Thursday's practice.
Perriman returned to the Jets lineup on Sunday for the first time since Week 2, catching 4-of-8 targets for 62 yards - which led the team. Hopefully playing 89 percent of the team's snaps did not lead to a setback. We suggest avoiding all Jets not named Jamison Crowder against the Bills in Week 7.
Added Yesterday 7:32 pm (EST)
Added Yesterday 7:32 pm (EST)

C. Samuel - WR
CAR1
Panthers WR Curtis Samuel (knee) was limited at Wednesday's practice.
"We'll see how he responds tomorrow, how he feels," head coach Matt Rhule said. "I think the thing with Curtis is we're not going to rush him. If he can go, great, but if not, we have a lot of confidence in the other guys." Samuel sat out Sunday's game against the Bears, and the Panthers clearly do not view him as an important enough piece to hurry back into the lineup.
Added Yesterday 7:21 pm (EST)
Added Yesterday 7:21 pm (EST)

N. Fant - TE
DEN1
Noah Fant (ankle) remained "limited" in Wednesday's practice.
Fant got in limited practices last week before sitting out against the Patriots. He is presumably closer to suiting up now, though we have seen a number of "limited" practice players miss several weeks of action this year. If Fant can get the go-ahead, he will immediately slide back in as a top-eight option up the seam.
Added Yesterday 6:49 pm (EST)
Added Yesterday 6:49 pm (EST)

A. Lynch - LB
JAC
Jaguars DE Aaron Lynch has ended his brief retirement and joined the team.
The 27-year-old hung up his cleats just two months ago but has now decided to come back to football. The Jaguars are dead last in adjusted sack rate and need all the help they can get off the edge.
Added Yesterday 5:08 pm (EST)
Added Yesterday 5:08 pm (EST)

R. Tonyan - TE
GB1
Robert Tonyan (ankle) did not practice Wednesday.
Tonyan played a season-low 59% of the snaps against the Bucs after limping off in the second quarter. He eventually returned for the second half, but Tonyan's numbers were forgettable with 3-25-0 on four targets on a day Aaron Rodgers was deleted by Tampa's stifling defense. Tonyan will be a TE1 if he suits up this week against Houston.
Added Yesterday 5:01 pm (EST)
Added Yesterday 5:01 pm (EST)