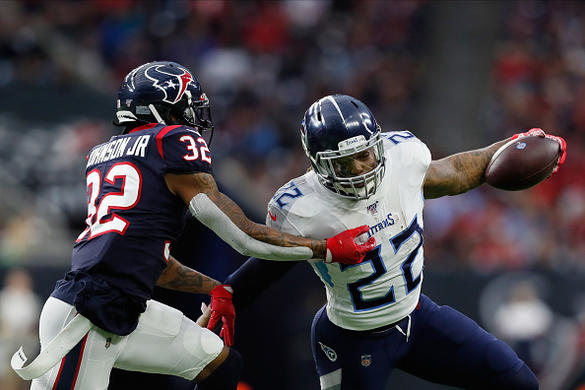 On Monday, Howard Bender put out the call on the Fantasy Alarm Show on SiriusXM Fantasy Sports Radio for songs that best describe your fantasy season as a whole. There are few things I love more than listing songs I like, so I went a bit overboard in listing some of my favorites, most of which were self-deprecating. The most appropriate title was probably A Long December, as I was in first place in three of my five leagues in the regular season but lost in the first round in two and the championship in the other. My other favorites were Desperate Man, Turn the Page, and I Wanna Get Better.

Upon seeing those tweets, Howard commented that at least I was doing well on MonkeyKnifeFight. He’s right, of course. Last week, two of our three games paid out, including the Touchdown Dance yet again. This week, I’ve decided to play two Touchdown Dance contests because I like it so much. That, of course, is one of the great things about MonkeyKnifeFight. If there is one game you prefer or one you want to avoid, you can do it pretty easily. I like all of the games, which is why I try to mix it up each week, but I also know that sometimes, you have to stick with what you’re good at. I’ve been pretty good at the Touchdown Dance this season, so I’m doubling down this week.

If the Vikings have a weakness, it is their secondary, which is the only reason I do not feel great about this pick. Minnesota hasn’t allowed a 300-yard passer since Week 10, and none of their opponents have come particularly close. Brees has been held under 320 passing yards in three straight games, and seven of his last eight.

Cousins failed to top 242 passing yards in each of his last three games, and New Orleans ranked 13th in passing DVOA this season. It certainly helps that Cousins has Thielen back, but I just don’t trust him against an above-average defense on the road.

I might set Derrick Henry 's over/under at 1.5 touchdowns, so if you feel strongly about Edelman, Michel or anyone else from this game, feel free to target 2.5 or even 3.5 touchdowns. You could certainly talk me into A.J. Brown over one of the Patriots, but I think the Patriots will be successful bracketing him and/or letting Stephon Gilmore shut him down. Edelman and Michel combined for 13 touchdowns this season, and if any Patriots score touchdowns besides Tom Brady , it will probably be one of these two.

You could talk me into Jared Cook instead of Michael Thomas . Cook has seven touchdowns in his last seven games, but I just cannot bring myself to play him ahead of Thomas, who had nine touchdowns this season including three in his last four games. Kamara finished the season with two touchdowns in each of his last two games, while Dalvin Cook had 13 touchdowns in 14 games this season. These are three really good players, which is why we need 2.5 touchdowns to win, but I don’t think this is a good spot to get frisky and try for a higher goal.

P. Peterson - DB
ARI
General manager Steve Keim confirmed Friday the team had discussed Peterson's contract with his representation, noting nothing has transpired yet, but that "we'd love to see him retire as a Cardinal," Grant Gordon of NFL.com reports.
For a full breakdown and detailed player analysis GO PRO and join the Fantasy Alarm Family! CLICK HERE to unlock your PRO package and take advantage of instant savings!
Added Yesterday 12:45 pm (EST)