Steve Pimental takes us through his NFL PlaySqorr Playbook for Week 17 with the best plays for Sunday's slate! 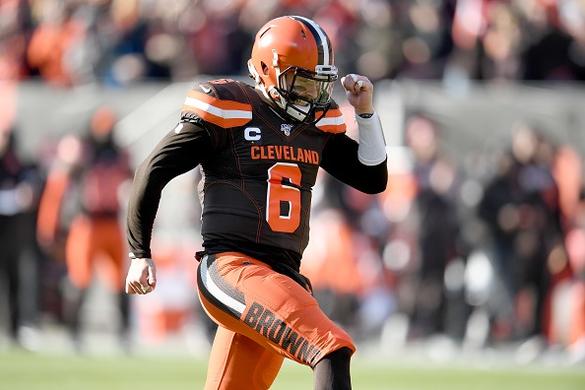 Usually, in fantasy football, it is a mistake to hold a grudge against a player who let you down in a particular week or season. While I understand the temptation to bench Odell Beckham after a poor week, you could wind up missing out when he finally does perform the way you expect him to. PlaySqorr is different. If Kenyan Drake plays out of his mind and ruins your card in Week 16, feel free to avoid him in your Week 17 card.

If I’m being honest, the real reason I’m avoiding Drake is that I don’t really trust him or Damien Williams , and I have no idea which side to pick. I guess I would pick Williams, but I wouldn’t feel good about it. Similarly, I’m skipping the kickers because I feel my strengths lay elsewhere. Matt Gay should probably outscore Chris Boswell , but I’m not confident enough in that to add him to my card.

I’m not sure why Goff is giving points here. Wentz has been good for the last four weeks, and while Zach Ertz ’s absence has me a little nervous, I still expect Wentz to play well in a must-win game against the Giants.

Baker has the much better matchup, but he may be missing a couple of targets, with Odell Beckham Jr. and Ricky Seals-Jones both questionable. Cousins and other starters are expected to be held out of this game, as Minnesota is locked into the No. 6 seed. If Cousins does play, it likely will only be for part of the game.

Barkley and Kamara have both turned it on at the end of the season, though Barkley has been good the last two weeks while Kamara only broke out of his slump in Week 16. I’d be lying if I was I was completely confident Kamara will keep it going, but he faces the worst run defense in the NFL, in a game the Saints need to win to try to secure a first-round bye. Philadelphia is seventh in fantasy points allowed to running backs, and they held Barkley to 9.7 fantasy points in Week 14.

Julio Jones has 35 targets total in two weeks with Calvin Ridley out, and Tampa Bay ranks 32nd in fantasy points allowed to wide receivers. If the Chiefs beat the Chargers in the early game, the Texans won’t have anything to play for, which means Hopkins could be limited or sit all together. Even if Hopkins does play the entire game, I trust Jones a whole lot more.

Edelman has generally been very consistent this season, his Week 15 hiccup notwithstanding. Sutton is certainly capable of having a big game and ruining this pick, but he has topped 12 fantasy points just once in his last five games. If Edelman has a typical Edelman game, which he should against Miami, I am confident he will come out on top.

With the No. 1 seed wrapped up, Lamar Jackson will not play, and I suspect Mark Andrews will play less than usual. San Francisco needs to win this game to secure the NFC West and a first-round bye, so it should be business as usual for George Kittle . And business is very good.