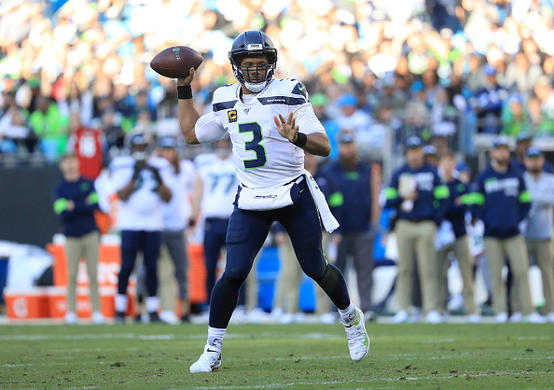 Chris Carson nearly carried my SuperDraft lineup to cashing singlehandedly, but in the end, even his 40 fantasy points were not enough. If I had gotten anything from Philip Lindsay, things would have looked drastically different. Sunday’s slate is pretty challenging, with a lot of the top fantasy players, especially at tight end, playing Saturday instead of Sunday.

Wilson and Lamar Jackson look like the safest plays of the slate, but Wilson gets a multiplier and the defense that has allowed the most fantasy points to quarterbacks this season.

Even with Calvin Ridley out on Sunday, Matt Ryan topped 19.10 fantasy points for the third straight game. I’m not sure I trust him, but there is no doubt he is much, much better than Ryan Fitzpatrick and Philip Rivers , who have the same multiplier as Ryan.

The Lions rank 29th in fantasy points allowed to quarterbacks and Lock proved he can take advantage of poor pass defenses when he scored 26.86 fantasy points against Houston in Week 14.

I’m not sure I’d play him for cash, but Ingram has multiple touchdowns in three of his last five games. With this matchup against the Browns, his ceiling is as high as anyone’s.

McCaffrey doesn’t need a multiplier. He has at least 25 fantasy points in nine of his last 12 games.

I nearly picked Alvin Kamara over Mixon, but Mixon’s matchup with Miami is just too good to pass up. Mixon has at least 15 fantasy points in six of his last seven games, including games against Baltimore and New England. The Dolphins rank 26th in fantasy points allowed to running backs

I prefer Gordon, but a lot of people disagree with me, and at that multiplier, I’m fine playing either, or even both. Oakland’s defense certainly isn’t scary.

The only team that has allowed more fantasy points to running backs than Jacksonville is Carolina. Devonta Freeman had 17.40 fantasy points against them two weeks ago, and while that isn’t anything to write home about, I will be perfectly content if I get that production this week with Freeman’s multiplier.

SuperDraft obviously values a high ceiling more than a high floor. Kareem Hunt is unlikely to ever have a huge game while Nick Chubb is healthy, but Hunt has at least 11.60 fantasy points in four straight games. I like his floor even in a tough matchup.

Josh Jacobs has been ruled out, and DeAndre Washington had 18.60 fantasy points in the only game he missed this season. I wouldn’t go so far as to say he is safe, but there’s something to be said for being the only game in town in an above-average matchup.

They’re the only two wide receivers I completely trust, and I am fine with foregoing a huge multiplier.

I can’t quite bring myself to play him for cash, but I’m getting there. Parker has at least 20 fantasy points in two of his last three games, and the time he came up short was when he left the game with an injury. He certainly seems safe, judging by his game log.

It feels a bit foolhardy to say I trust Sutton when he has a rookie quarterback throwing to him, but he also faces a Detroit team that ranks 31st in fantasy points allowed to wide receivers.

McLaurin is basically a poor man’s Courtland Sutton , at least for fantasy. McLaurin is a good player with a rookie quarterback and a good matchup.

Can lightning strike two weeks in a row? Stranger things have happened.

Goedert has at least six targets in five straight games, and I would be shocked if the streak ends. He hasn’t scored since Week 11, but with all of the snaps and targets he’s been getting, I think he has a good chance to score in this game.

I’d say this pick is 60 percent due to all of the good tight ends who play Saturday and are off Sunday, and 40 percent due to facing the Cardinals. That may no longer be a thing, but with how weak this position is, it seems like a chance worth taking.

This is a total dart throw, but Washington ranks 28th in fantasy points allowed to tight ends, which certainly helps.

J. Clowney - DL
SEA
The Seattle Times believes the odds that free agent Jadeveon Clowney re-signs with the Seahawks are "likely increasing."
When the Browns opted to restructure Olivier Vernon's contract rather than release him, it might have removed Cleveland as a suitor. The Raiders have apparently made a lowball offer. Reporter Bob Condotta does not expect the Seahawks to offer the $15-$16 million that was originally on the table. Clowney is a good player with no good options.
Added Jul 07 6:41 pm (EST)
Added Jul 07 6:41 pm (EST)