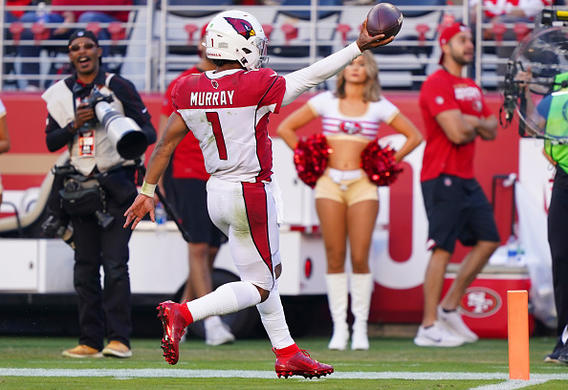 This week’s SuperDraft slate is the most wide open that I can remember. It’s difficult to find many players I feel like I can trust for cash games outside of Lamar Jackson and Christian McCaffrey , and while using them to anchor a cash lineup isn’t the worst idea, it’s difficult when nearly everyone else at their respective positions has a good-sized multiplier. With that in mind, I’m mostly going to turn my attention to GPP lineups, though I will, of course, highlight cash options at each position as well. 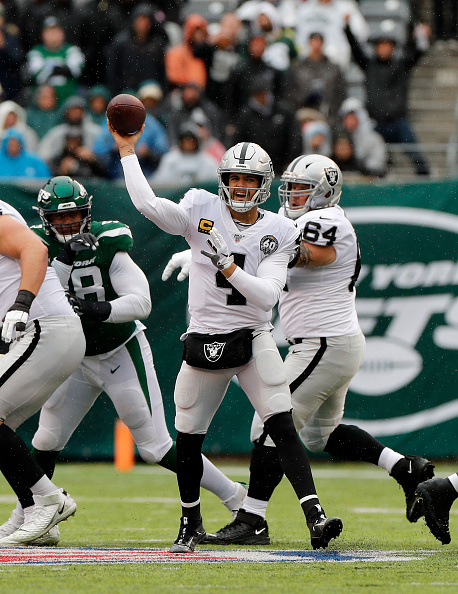 I was obviously 1000-percent wrong when I said Carr would be safe last week, so I won’t make that same mistake. However, Carr has been solid for the entire season, and no one is afraid of the Chiefs’ defense. Carr is the player with the highest multiplier who I will consider playing this week.

Murray has at least 34 rushing yards and 24 fantasy points in three straight games, including two against San Francisco. It’s difficult to trust Murray completely at this point, but if he continues to run, it should keep his floor pretty high.

Rodgers has struggled the last three weeks, but it’s hard to ignore him at the Giants, who rank 24th in fantasy points allowed to quarterbacks. Rodgers had six touchdowns last month against the Raiders, just in case you needed a reminder of how good he can be.

In a cash lineup, I think you almost have to play Jackson. He has at least 25 fantasy points in six straight games. Patrick Mahomes , by way of contrast, has one touchdown or fewer in four of his last six games. I’m a little nervous about the matchup, but Jackson appears to be match-up proof after big games against the Patriots and Rams.

I feel like you pretty much have to play McCaffrey for cash games until further notice. It’s hard when everyone else at his position is getting at least 1.35X the points, but even with the multiplier, no one can match the 27.3 fppg he is averaging.

Barkley has disappointed the last two weeks against the Jets and Bears, but now he gets a Packers team allowing the third-most fantasy points to running backs. I will completely give up on him (at least for one week) if Barkley struggles again, but I feel like he is too good not to turn things around.

I’m doing it again. Jacobs crashed and burned at the Jets last week, in part due to game script. It is certainly possible the Chiefs jump out to a big lead and Jacobs only gets 11 touches again. That being said, no team has allowed as many fantasy points to running backs as the Chiefs, and Jacobs has at least 13.9 fantasy points in five of his last seven games.

This match-up didn’t work for Josh Jacobs last week, but that doesn’t mean it won’t work for Mixon. Mixon has at least 15.70 fantasy points in three of his last four games, and getting Andy Dalton back can only help.

I’ll probably feel better about this call if Jordan Howard is inactive, but I think you can trust sanders regardless. Sanders has at least 8.80 fantasy points in three of his last four games, and I can forgive him for struggling against New England. The Dolphins are 28th in fantasy points allowed to running backs.

Lindsday’s match-up isn’t quite as good as Sanders’s, but Lindsay is probably a bit safer. He has at least 7.30 fantasy points in four straight games.

With Damien Williams ruled out, Darrel Williams looks like a good bet to at least match his production from Week 11, when he had 11.30 fantasy points on 13 touches. 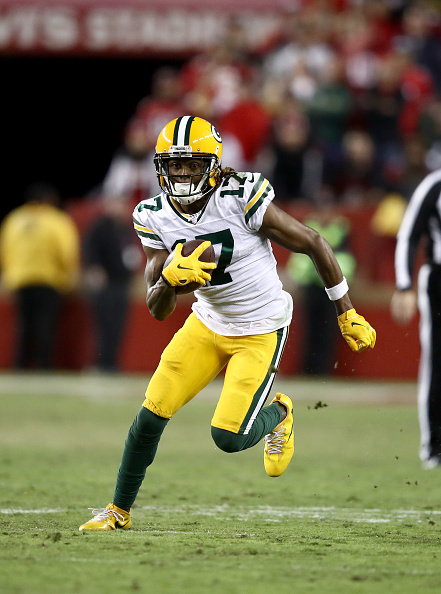 I think Tate is a sneaky cash play. He has at least 7.00 fantasy points in six straight games with Andy Dalton at quarterback. Tate looks like a good receiver stuck in a bad offense, but I think both he and Tyler Boyd have value on SuperDraft.

I really like the Adams/Rodgers stack for GPP contests. Adams has seven receptions in three consecutive games, and I think he’s due for a big game after scoring just one touchdown in seven games this season.

Sutton struggled his last time out against Buffalo, and it remains to be seen if he can cope with being always getting the brunt of the defensive attention. That being said, his multiplier is way too high.

Brown has at least 16 fantasy points in two of his last three games. He is a boom/bust player, but so is everyone with a 1.6 multiplier or higher. I’d rather take a chance on the guy in the best offense in the league than the rest of the WR3 morass.

Henry’s multiplier is awfully high for someone who has at least 11 fantasy points in five of his last six games. He and Travis Kelce are the only tight ends I trust for cash games while George Kittle and Zach Ertz deal with nagging injuries.

I’d be lying if I said I knew exactly what to expect for Jack Doyle with Eric Ebron out, but we’ve seen Doyle be productive for fantasy in the past, and the Colts don’t really have anyone else to replace Ebron. Doyle is an obvious GPP play, and my only concern is that his ownership will be super high.

Higbee caught five of his targets last week, though he only managed 20 yards. Even so, he’d be a fantastic GPP play against the Cardinals if Gerald Everett is out. That might help keep Jack Doyle ’s ownership down, too.

C. Thompson - RB
JAC1
The Florida Times Union believes the Jaguars will look to move on from free agent Chris Thompson.
Thompson played in only eight games before landing on IR with a back injury. He averaged four touches per week when healthy, playing 29 percent of offensive snaps.  With a new coaching staff and a three-down back in James Robinson, the Jaguars should let Thompson walk this offseason.
Added 11:14 am (EST)
Added 11:14 am (EST)

A. Brown - WR
TB1
Bucs coach Bruce Arians doesn't expect Antonio Brown (knee) to practice this week.
Brown and SS Antonie Winfield are expected to sit out this week of practice. “I think it’s too early,” Arians said. “Neither one of those guys will probably practice and we’ll see how it rolls out next Tuesday for both of them.” The Bucs are also hoping to get FS Jordan Whitehead (shoulder) back in the next two weeks. All three players are up in the air for Super Bowl 55.
Added 10:05 am (EST)
Added 10:05 am (EST)

O. Beckham - WR
CLE1
Browns GM Andrew Berry said Odell Beckham (knee) is on track in his recovery from ACL surgery.
Beckham is two months removed from tearing his ACL in Week 7. It's good news that he's setback-free, but Beckham will be sidelined through OTAs and seems unlikely to be ready for the start of training camp. Browns coach Kevin Stefanski said he's "excited" for Beckham's return in 2021, though the Browns figure to explore his market this offseason. Cleveland can clear $15.75 million in cap space by trading or releasing Beckham.
Added 9:23 am (EST)
Added 9:23 am (EST)