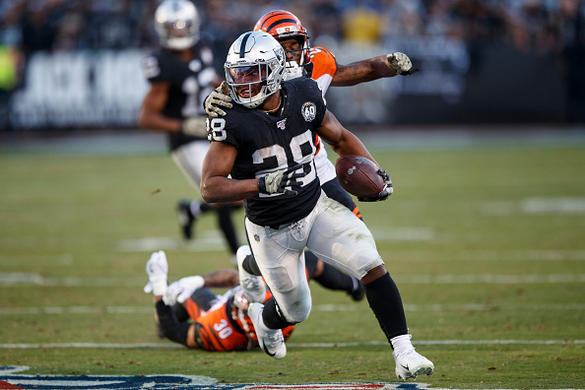 I think this might be my favorite week to play SuperDraft so far. With so many of the top players either on bye or with poor matchups, I feel like this week is as wide open as any I can remember. There are some players with low multipliers who I like for cash, especially because trustworthy players are so hard to come by. At the same time, I cannot remember the last slate that featured so many players with multipliers of 1.4X and more who I really like. This week should be fun, so make sure you get your SuperDraft entries in early so you can reserve your spot.

Brees gets the slight nod over Matt Ryan , but Ryan is playable too in what is probably a better matchup. I just think Brees is the better, safer fantasy play.

You could make an argument Carr is the safest quarterback on Sunday’s slate regardless of the multiplier. Carr has at least 13 fantasy points in eight of his 10 games this season, including each of his last five.

Darnold has finally looked more like the quarterback we saw last season, though matchups with the Giants and Redskins have certainly helped. He gets Oakland this week, and a repeat four-touchdown performance is certainly on the table.

Fitzpatrick was limited in practice Wednesday and Thursday, and if he doesn’t play, Josh Rosen is an option getting 2X points. Cleveland’s defense is not scary, especially with Myles Garrett out, and Fitzpatrick is averaging 17.9 fantasy points over his last five games.

I don’t necessarily expect Brandon Allen to continue to top 14 fantasy points in every game, but he’s certainly capable of doing it one more time. The emergence of Noah Fant to go along with Courtland Sutton certainly helps his case.

The Bengals are 28th in fantasy points allowed to running backs, and Samuels is a must-play for cash if James Conner is out. Samuels had 19.54 fantasy points and Conner had 22.5 against the Bengals back in Week 4.

Jacobs was solid against Cincinnati last week, though he failed to get in the end zone. The Jets’ are better defensively, but I’m not afraid of them. Jacobs has at least 13.9 fantasy points in five of his last six games.

I wish I knew how to quit Bell, but even though we haven’t gotten big games from him, he has at least 14.8 fantasy points in three straight. I love his chances of making it four in a row against Oakland this week.

The Bengals offensive line no longer looks like a disaster, and Mixon has at least 15.70 fantasy points in three straight games. I’m not quite as confident in him as I am in Bell, but I obviously think Mixon is a good player, and I doubt his ownership will be very high.

I don’t love Singletary as much as some, and he was just okay last week against Miami. However, he has upside, and he got 16 touches last week. You could do far worse for a GPP play.

This is an ugly week for receivers, so now, more than ever, I’m tempted to play one or both of these guys, especially for cash. Thomas and Jones play the 28th and 32nd ranked teams in fantasy points allowed to wide receivers this season. If I had to pick one, it would be Thomas, but I think Julio is nearly as safe.

I’m not the only person to predict this is the game OBJ finally looks like himself, but there’s no doubt this is the best matchup he’s had in over a month. He’s tempting for cash, but I think I’d rather play Julian Edelman with the same multiplier.

He demonstrated last week how great his ceiling can be, and we know he has another fantastic matchup. I refuse to trust him for cash games, however.

I don’t think there’s any receiver with a higher multiplier who I trust for cash except maybe, maybe DeVante Parker . I doubt Crowder scores a touchdown for the fourth straight week, but he should be safe for at least five receptions and 75 yards.

They are both too good to have such a high multiplier, but we cannot trust them due to their injuries and quarterback, respectively. If Jeffery is active, I’ll lean towards him due to the matchup.

I don’t really trust any tight end this week, including Zach Ertz and Darren Waller , so I may as well go for some upside. Cook gets the slight nod for me over Jacob Hollister , just because I like his matchup better. Also, Cook has at least 10.3 fantasy points in four straight games.

Olsen is averaging 11.0 fantasy points over his last two games, and while I don’t really trust it, he’s got as good a shot as any of repeating that production.

Goedert’s ceiling is lower than Zach Ertz ’s, but his floor is higher, and so is his multiplier. I like the matchup, and they’ll likely have to look his way quite a bit if Alshon Jeffery is out.

Brate caught 10 passes on 14 targets with O.J. Howard in the dog house last week. I have no idea how much Howard will play, and I doubt Brate will get double-digit targets regardless, but we know he’s got the talent to put up fantasy points if he’s given the opportunity. 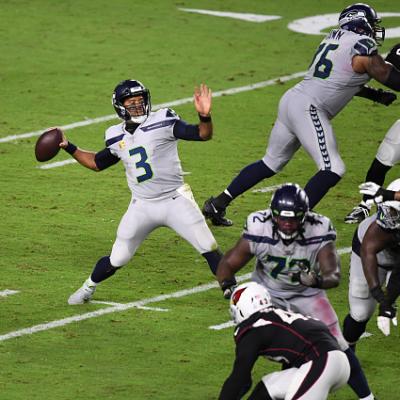 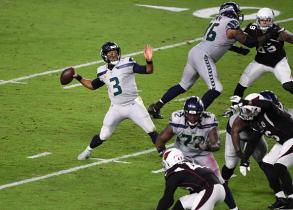 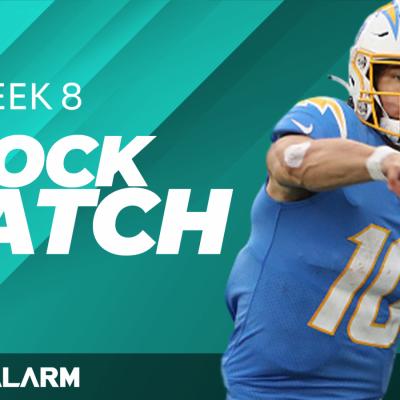 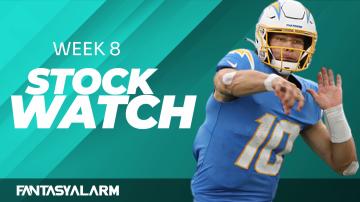 NFL Edmonds to be primary RB with Drake (ankle) out

M. Evans - WR
TB1
Bucs head coach Bruce Arians said Mike Evans, Chris Godwin, and Scotty Miller are all dealing with nagging injuries and are not 100 percent healthy.
Arians cited the receivers' health in explaining why the team signed Antonio Brown to a one-year deal. “They’re hurting,” Arians said, “they’re playing, but they’re nowhere near full speed. I think we can get better and better. ... Offensively we’ve been struggling all year with injuries. I wanna be able to make that playoff push with whoever’s available.” Arians said Godwin (hamstring) is playing at 80 percent, Evans (ankle) at 80 percent, and Miller (hip) at 85 percent. This probably doesn't explain Evans' lack of involvement in the Tampa offense when Godwin is in the lineup. Evans drafters should look to him as a flex option going forward.
Added 10:28 am (EST)
Added 10:28 am (EST)

C. Edmonds - RB
ARI1
Cardinals RB Chase Edmonds is expected to be the team's primary ball carrier with Kenyan Drake (ankle) out.
Edmonds last week tallied 58 yards on five carries and 87 yards on seven catches in Arizona's overtime win against the Seahawks. Notching 6.1 yards per carry on 29 rushes this season, Edmonds could be a borderline RB1 with a full workload in the few weeks Drake is expected to miss with his ankle injury. He should be the top waiver add in all leagues this week. Rookie RB Eno Benjamin should be added in deeper formats as the potential next guy up in the Cardinals' backfield. Drake has accounted for a team-high 29 percent of Arizona's total opportunity (rushes plus targets) through seven weeks.
Added 10:04 am (EST)
Added 10:04 am (EST)

C. Hyde - RB
SEA1
Seahawks RB Carlos Hyde is dealing with hamstring tightness and is uncertain to play Week 8 against the 49ers.
Hyde joins Seattle's backfield injury report with Chris Carson, who's week to week with a mid-foot sprain, and Travis Homer, who has a bruised knee. That leaves rookie DeeJay Dallas as the only healthy running back on the roster. Rashaad Penny is recovering from a knee injury and won't be available anytime soon. The Seahawks may be unable to bring in running back reinforcements in time to play the Niners, thanks to COVID-19 testing protocols for incoming players. Dallas could be the default workhorse back for Seattle in Week 8. He should be picked up in all leagues.
Added 9:38 am (EST)
Added 9:38 am (EST)

C. Newton - QB
NE1
Patriots head coach Bill Belichick said aftereffects of COVID-19 are not affecting Cam Newton's play.
"We'd list him on the injury report if he was," Belichick said when asked if Newton's recent struggles were related to his positive virus test in early October. "I don't think he's had any symptoms the whole way." Speculation had swirled about Newton -- who was benched Sunday after throwing three interceptions against the 49ers -- dealing with the effects of COVID-19 in his return to the field this month. That appears not to be the case.
Added 8:03 am (EST)
Added 8:03 am (EST)

C. Akers - RB
LA1
Cam Akers didn't touch the ball in the Rams' Week 7 win over the Bears.
He played just a handful of snaps as the very distant RB3 behind Darrell Henderson (17 touches) and Malcolm Brown (10). Akers is merely a bench stash in fantasy should one of Henderson or Brown get injured. He hasn't touched the ball over the last two weeks after posting a 9-61 rushing line in Week 5 at Washington.
Added 12:01 am (EST)
Added 12:01 am (EST)

G. Everett - TE
LA1
Gerald Everett caught 4-of-5 targets for 28 yards and one touchdown in the Rams' Week 7 win over the Bears.
Tyler Higbee (hand) didn't play in this one, but Johnny Mundt was actually second on the Rams in receiving with a 3-47 line on three targets as the No. 2 tight end. Everett at least was able to find the end zone with a 12-yard score in the third frame. He and Higbee cancel each other out most weeks, leaving both as TE2 options ahead of Week 8 at Miami.
Added Yesterday 11:59 pm (EST)
Added Yesterday 11:59 pm (EST)

J. Graham - TE
CHI1
Jimmy Graham caught 5-of-6 targets for 31 yards in the Bears' Week 7 loss to the Rams.
Graham has seen at least five targets in all but one game this season and is very clearly a favorite of Nick Foles in the scoring area. He's a TD-dependent back-end TE1 most weeks at a shallow fantasy position ahead of Week 8 against one of his former teams in the Saints.
Added Yesterday 11:57 pm (EST)
Added Yesterday 11:57 pm (EST)

R. Woods - WR
LA1
Robert Woods caught 3-of-5 targets for 22 yards in the Rams' Week 7 win over the Bears.
He added 23 yards on four rushing attempts but fumbled away one of those that was easily scooped up by Eddie Jackson and returned for a short touchdown after Woods was blown up in the backfield. Woods hasn't had a 100-yard game since Week 1 in this run-dominant offense. He and Cooper Kupp have devolved into weekly WR3 plays ahead of a Week 8 date on the road at the Dolphins.
Added Yesterday 11:55 pm (EST)
Added Yesterday 11:55 pm (EST)