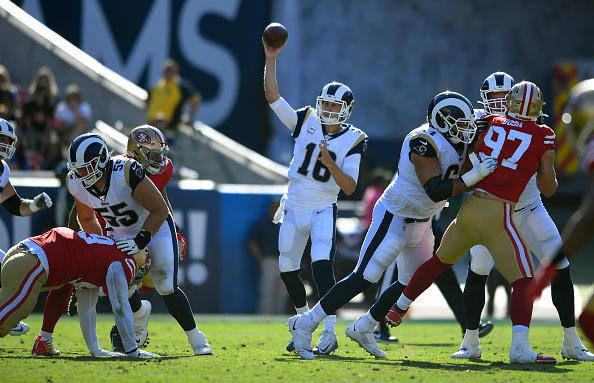 After taking a week off from playing SuperDraft to go hiking in Arizona, I’ve realized a couple of things. The first is that I think I need to be a bit more willing to use players with little to no multiplier. It’s fun to chase guys with high multipliers and hope for a big day, but I think I need to choose my spots. If I feel very strongly about a top quarterback or tight end, I should be more willing to just go with that player.

The other thing I’ve realized is that most of my favorite plays fall in the 1.25X to 1.6X range. There are a couple of players with higher multipliers I’m willing to roll the dice on, but there are plenty of mid-ranged guys with good matchups I feel confident in. I don’t think there’s anything wrong with that, and hopefully, it will lead to more success in Week 7. Let’s take a look at who I’m playing this week, as well as my Week 7 cash lineup.

Goff hasn’t been great this season, but I feel like his struggles have been overstated. He’s still good enough to carve up a terrible defense, and that is what he faces Sunday at Atlanta. The Falcons are 28th against opposing quarterbacks, and it should only help Goff if Todd Gurley can go.

It’s awfully hard to find a quarterback with a high multiplier who doesn’t make you a bit sad to start him. Brissett is solid in real life and in fantasy, and he should be able to take advantage of a weak Houston secondary.

Jackson and Russell Wilson are tied in fantasy points this season, but Jackson has a slight advantage in multipliers.

I don’t think there are any backs I like better for Week 7 besides Dalvin Cook and David Johnson , and Ingram’s multiplier is better than both of those players.

Johnson has scored at least 15.5 fantasy points in four straight games and five out of six overall. He has at least six receptions in four games this season and the Giants are 27th in fantasy points allowed to opposing running backs.

The last time we saw Jacobs, he was running all over the Bears, for 123 yards and two touchdowns. Coming off the bye, he has a much easier matchup against the Packers, who have struggled to stop any running backs since Week 1.

Coleman has at least 13 fantasy points in both games since returning from an ankle injury. This is his best matchup yet, and Coleman should be awfully safe for cash lineups.

I’m a sucker for Mixon. I know his team is bad, but I don’t think they’re hopeless. More importantly, I think he’s just too talented to have such a high multiplier.

Hyde has at least 18 touches in three straight games for what is arguably the best offense in the game. He could easily find the end zone a couple of times, which would be fantastic with that multiplier.

It’s difficult to trust Lockett when he has had five targets or fewer in three straight games, but he’s catching passes from the best quarterback in the league, and he has double-digit targets in two games this season. With so many teams on bye, Lockett is a very strong play with a nice multiplier.

Davante Adams , Jimmy Graham , Geronimo Allison and Marquez Valdes-Scantling are all dealing with injuries, and if at least two of them are out, Lazard is worth a dart throw.

Tate came through for us two weeks ago with 10.10 FP, and he followed that up with 11.6 FP last week. His multiplier isn’t quite as high as it was two weeks ago, but it’s high enough to take a shot.

We mentioned above that this is a fantastic matchup, and Cooks is the cheapest of the Rams’ receivers. Cooks has slumped the last two weeks, but I see no reason to believe that will continue.

Brown has been solid all season, and this is a good situation coming off the bye against the worst team in the NFL.

Both of Henry’s touchdowns last week came after the game was basically decided, but he is tied for fifth in touchdowns among tight ends despite playing just one game. Henry is one of the handful of tight ends you can actually feel good about playing, and all of the others have lower multipliers.

Engram is such a good play this week, I don’t even care that his multiplier is so low. The Cardinals have allowed at least one touchdown to a tight end in five of their six games this season, and this is by far the best tight end they have faced.

I doubt I will actually mess around with any tight ends outside of Henry and Engram, but Hockenson has a higher multiplier and he is tied with those other two tight ends with two touchdowns on the season. Hockenson is a GPP play.