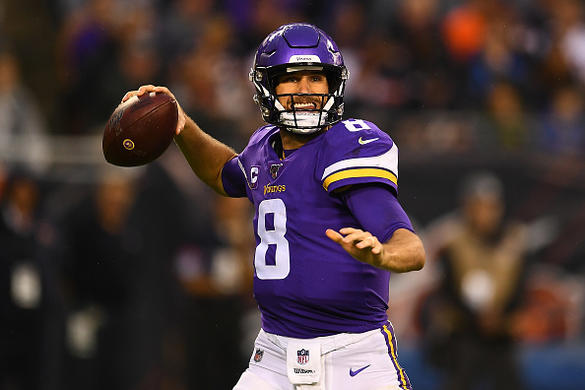 We’ve had a couple of rough weeks in the SuperDraft Playbook. Kerryon Johnson , Will Dissly and Devonta Freeman delivered, but they were the only ones. Case Keenum finished with 0.77 fantasy points, and he wasn’t even the worst player in my lineup. Mecole Hardman had negative points, as well as the multiplier. I can’t say I had considered the possibility I might have to worry about the multiplier hurting my total.

One thing you don’t have to worry about if you want to give SuperDraft a try is losing money. They are offering a free contest with a $500 prize pool. If you want to dip your toes in the water before you put any money on the line, that option is available to you. For my lineup this week, I’m going to stick to cash contests in an effort to bounce back from last week.

Between byes and primetime games, a lot of really, really good players are missing from Sunday’s slate. That’s not a problem, but it does mean you might have to take a few more risks, and even the players with low multipliers can be risky.

His wide receivers are upset, and at least one wants a trade. He went on the radio and apologized for not throwing the ball better or more often. He is facing the worst defense in the NFL. This is probably a game Mike Zimmer wants to run the ball 10 times and win 20-3, but I think the Vikings will take advantage of the matchup and throw at least a couple of touchdowns just to prove that they can. Of course, it could go the other way, so this is a GPP play only.

Like Kirk Cousins , Matt Ryan needs a get-right game, and he has a pretty good matchup Sunday. Houston’s secondary can be exploited, but only if Ryan throws to Julio Jones and Calvin Ridley . He should be pretty safe as well, having scored at least 24 fantasy points in three out of four games.

Brady may be the safest quarterback in Week 5, but he has a lower multiplier than the other candidates. Brady is coming off a rough game at Buffalo, but he should take advantage of Washington's terrible secondary.

Ingram has at least 70 scrimmage yards in every game this season, and he has five rushing touchdowns. He’ll be disappointing if he doesn’t score, but I think he’ll get at least one touchdown. The multiplier doesn’t hurt, either.

Johnson hasn’t done much as a runner, but he has at least six catches in three of his four games this season. Now he gets to face the team that allowed Mason Rudolph to complete eight passes to two different running backs last week.

Lindsay is splitting the work pretty evenly with Royce Freeman these days, but there is enough work to go around. It also doesn’t hurt that Lindsay is really good. His fantasy production has suffered from facing Chicago and Jacksonville, but the Chargers don’t scare me.

Cook has been so good this season, if he can just match his average, you won’t need a multiplier. There is a decent chance he comes down to Earth sometime, but probably not against the Giants.

Let’s hope the squeaky wheel gets the grease. Unless he’s traded before the game, I think Minnesota will use this opportunity to pepper Diggs with targets in an effort to keep him happy, at least for one week. It doesn’t hurt that he’s facing an awful defense.

Hopkins will not get held down for long, and I think we’re probably going to get a breakout game like we got from Davante Adams and Robert Woods last week. If he tops 100 yards and has a touchdown or two, you won’t miss the multiplier.

Gordon has had an up-and-down season, but his two down games were against Buffalo and with Antonio Brown on the roster. Brown is gone, and Washington does not defend like Buffalo. Gordon cannot be trusted, but I love the upside.

Sanders has scored at least 14.9 fantasy points in three of his four games, and I’m willing to give him a pass for his stinker against Green Bay. Courtland Sutton is playable too, but I think Sanders is a bit safer.

Tate is a total dart throw, but he has a good chance at targets with John Ross and A.J. Green out. Tate is averaging 5.0 receptions and 8.0 targets over his last two games, and this should be a great matchup against Arizona.

I was hoping for a higher multiplier, but it wasn’t to be with so many of the top tight ends missing from the slate. Graham was finally healthy going into Week 4, and Aaron Rodgers targeted him nine times. Graham should be awfully safe for targets if Davante Adams is inactive or limited, but even if Adams is a full go, Graham has as much upside as anyone.

Maybe if enough receivers go down with an injury, Eifert will become an important part of the passing game? He has five targets in three of four games, and a touchdown in one. He’s worth a shot.

I suspect Knox is at least a year away from being a meaningful fantasy contributor, but stranger things have happened. He’s had at least 50 receiving yards each of the last two weeks

If you really want to take a big swing at the position, Vannett will likely start if Vance McDonald cannot go. Vannett had a meager 28 receiving yards in Week 4, but if he gets in the end zone, the multiplier will come in handy.

D. Williams - RB
KC
Chiefs RBs coach Deland McCullough expects a "big jump" from Damien Williams this season.
“Just listening to the way Damien spoke about himself and the things we’re doing and the things he’s going to do to improve, I think his maturation in this offense is going to be a big jump this year," was McCullough's full quote. All the focus has been on Clyde Edwards-Helaire since he came off the board on Night 1 of the draft, but it is very much up for debate if the diminutive LSU product is readymade for an early-down role in the NFL. CEH is a dynamite pass catcher, but Williams also excels in that area. Coach Andy Reid was comfortable with a committee in 2019. Especially in the context of the coronavirus-shortened offseason, it should not be surprising if Reid heads that direction again. CEH's ADP is a leap of faith.
Added Yesterday 3:54 pm (EST)
Added Yesterday 3:54 pm (EST)

J. Rohrwasser - K
NE
Patriots fifth-round K Justin Rohrwasser has had his "Three Percenters" militia tattoo removed.
The far-right group has been associated with racism. Rohrwasser claimed ignorance when it became a controversy following his draft selection, saying he merely thought it was a military tribute. That, of course, strains belief. He vowed to have it removed and has followed through on doing so. "I’m going to learn from this," Rohrwasser claimed. We would certainly hope so. Rohrwasser's draft capital makes him the heavy favorite to replace Stephen Gostkowski in New England.
Added Yesterday 3:41 pm (EST)
Added Yesterday 3:41 pm (EST)

B. Hoyer - QB
NE
ESPN's Mike Reiss believes Brian Hoyer could be the odd man out of the Patriots' quarterback room.
In other words, the Patriots might not keep three quarterbacks. Hoyer's fate could depend on Cam Newton's health. 31-year-old Newton has suffered major shoulder and foot injuries over the past few seasons. On his last legs in the NFL, Hoyer will be a roster luxury the Pats probably can't afford if Newton looks ready to go this summer.
Added Yesterday 3:35 pm (EST)
Added Yesterday 3:35 pm (EST)

D. Swift - RB
DET
Lions signed second-round RB D'Andre Swift to a four-year contract.
Swift (5’8"/212) averaged 7.8 yards per touch behind Nick Chubb and Sony Michel as a true freshman at Georgia before clearing 1,000 yards rushing and seven scores each of the past two years as starter. Swift’s combination of vision, patience and 63rd-percentile Adjusted SPARQ athleticism made him an efficient runner, averaging 6.6 yards per carry on 440 career totes. 20 percent of Swift’s 196 senior carries gained at least 10 yards, the best mark in this year’s draft class. A rugged runner with elite acceleration, Swift is also excellent at reading the first level of the defense. He is the fantasy pick over Kerryon Johnson, checking in as an upside FLEX with an easy path to every-week RB2 status.
Added Jul 04 4:56 pm (EST)
Added Jul 04 4:56 pm (EST)

C. Newton - QB
NE
NFL Network's Ian Rapoport reports the Patriots are "confident" in Cam Newton's physical condition.
Newton is currently in town to take his physical. Rapsheet claims "no issues at all are anticipated." Newton's foot is what cost him 2019, but we would assume his troublesome shoulder is the bigger physical concern. Those twin ailments are the reason Newton lingered on the market until late June, though the COVID-19 pandemic undoubtedly dragged the situation out longer.
Added Jul 04 2:30 pm (EST)
Added Jul 04 2:30 pm (EST)

G. Davis - WR
BUF
The Bills' official website believes fourth-round WR Gabriel Davis could be a "plug-and-play weapon."
The 6-foot-2 UCF product provides some badly-needed size for the Bills' receiver corps. Although he is not the most polished route runner, Davis' immediate impact could come in the form of plays down the field and targets in the red zone. A 21-year-old rookie, Davis is an intriguing Dynasty league prospect.
Added Jul 04 11:11 am (EST)
Added Jul 04 11:11 am (EST)

Z. Moss - RB
BUF
The Bills' official website confirms the team wants third-round RB Zack Moss to "play a role similar to Frank Gore's."
The Bills want Moss to be a powerful change-of-pace complement to Devin Singletary. Like Gore, Moss can also catch passes, so his presence on the field won't be a "tell" the way it is with some power backs. It is unclear if the Bills view Singletary as a true every-down talent. Especially once bye weeks arrive, Moss could provide some standalone re-draft value as an RB4.
Added Jul 04 11:07 am (EST)
Added Jul 04 11:07 am (EST)

S. Diggs - WR
BUF
The Bills' official website reports Stefon Diggs worked out with Josh Allen earlier this offseason.
It is just something to file away headed into training camp. Diggs and Allen will be a shotgun wedding of sorts after getting zero official offseason practices to start establishing their chemistry, but informal workouts are much better than nothing. Barring massive strides in the accuracy department, Allen could make life difficult for Diggs down the field.
Added Jul 04 11:02 am (EST)
Added Jul 04 11:02 am (EST)