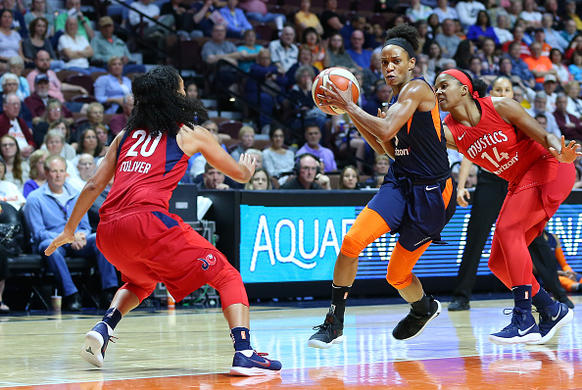 For Friday’s edition of the DFS WNBA Playbook, I want to start out by thanking those people who reached out on Wednesday looking for a WNBA Playbook. As of now, there are no plans to deviate from our policy of only offering a Playbook on days with three or more games, but it fills my bucket to know that interest in the WNBA and the Playbook are growing. Fortunately, we have only two more two-game slates in June, so for the most part, if there are multiple WNBA games, there will be a Playbook to go with them.

If you weren’t one of the people looking for a Playbook on Wednesday, and you are instead someone who, like our fearless leader, prefers to play WNBA DFS once a week, Friday should be a great day to play. Perhaps the best reason to play Friday is that the last two games of the slate will be aired on NBA TV. I love to watch the games to see how my lineups do, and that is easier for a lot of people when the games are on NBA TV. That being said, if you care about the WNBA even a little bit, I highly recommend WNBA League Pass. For just $17 you can watch just about every WNBA game for the entire season.

Friday’s League Pass game is the Los Angeles Sparks at the Washington Mystics. These are two of the top five teams in the WNBA standings, and we get two more of those teams—Connecticut and Seattle—in the late game. Friday’s slate also features five of the top six teams in the WNBA in pace and offensive rating. I expect a lot of scoring and fantasy points in this games, so keep that in mind when you are setting your lineups. You might want to take on a bit more risk, even in your cash lineups, because 185 fantasy points might not be enough to cash if all three of these games produce a lot of points.