Steve Pimental takes a look at the H2H matchups for NBA & NFL on Draft Easy and gives you his picks for tonight's NBA contest and the NFL Conference Championship Games. 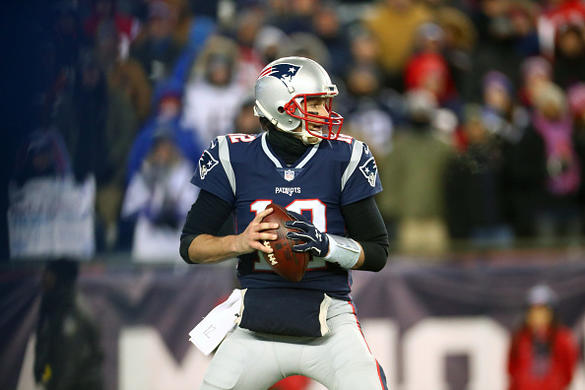 After weeks of crowing as my picks consistently finished in the money, it is only fair I own up to having a rough time last week. Both my NFL and NBA picks failed to cash, as picking against Ben Roethlisberger and Le’Veon Bell turned out to be a mistake. I was also completely wrong about Jonas Valanciunas not matching up well against the Cavs. The good news, if there is any, is I feel a lot more confident in these picks (especially NFL) than I did last week. Let’s hope that confidence is justified.

As I noted above, these picks are the ones I am actually playing in my own entries. Each player is listed along with his opponent. My choice is in bold. 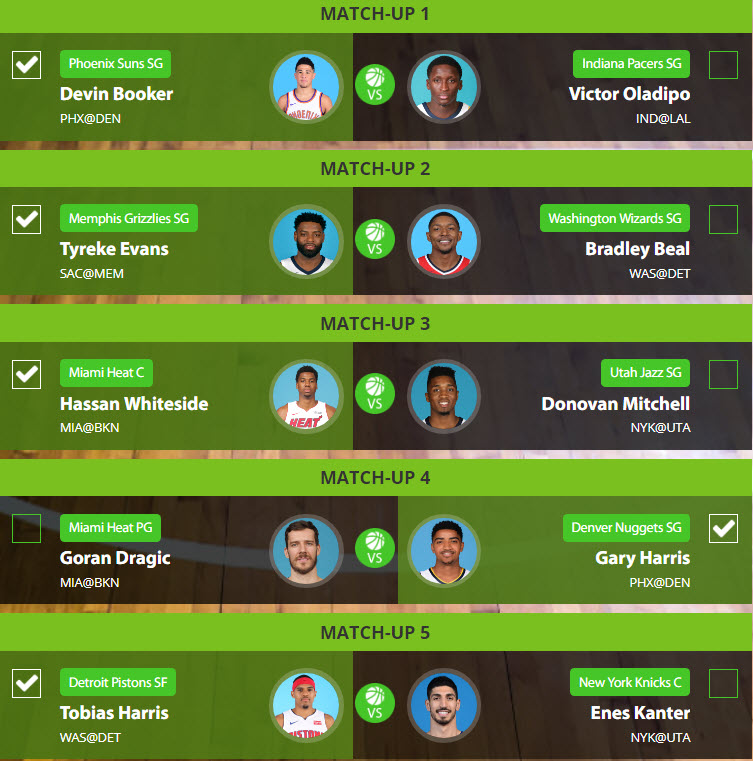 Devin Booker has at least five rebounds and seven assists in three consecutive games, and if that continues, it doesn’t matter how many points he scores. That being said, the Lakers are allowing the fourth most points in the NBA and the Nuggets are allowing the eighth fewest points at home. No team has allowed more fantasy points to opposing shooting guards than the Lakers. That being said, the Pacers played in Portland last night while the Suns have had two days’ rest. Oladipo has failed to score 20 points in three of his seven games since returning from a knee injury, so I will give the edge to Booker.

In my mind, this matchup hinges entirely on the health of Avery Bradley. Bradley Beal is averaging 17.5 points, 3.0 rebounds and 3.0 assists in two games against the Pistons, but I expect him to do much better than that if Bradley is out. I am picking Evans right now, and this matchup is close regardless, but I will likely change this pick if Bradley is ruled out.

Whiteside has five double-doubles in his last six games, and he has at least two blocks in seven consecutive games. Donovan Mitchell, for all of his scoring, can’t really compete with that. The Nets have allowed the second most rebounds and blocks per game this season and the fifth most points. This has a chance to be a huge game for Whiteside.

Both Dragic and Harris will be missing important backcourt mates Friday with Tyler Johnson and Jamal Murray out. Goran Dragic is averaging 19.8 points, 7.5 rebounds and 4.0 assists in four games with Tyler Johnson out this season. While Harris had 19 points, 2 rebounds, 4 assists, 4 steals and four turnovers Wednesday in the only game Murray has missed. The Suns have allowed the most points in the NBA and the second most steals. Also, Harris scored 36 points in his only game against the Suns this season, while Dragic is averaging just 15.5 points in two games against Brooklyn. Based on their opponents, I have to go with Harris.

The Jazz are allowing the sixth fewest offensive rebounds per game and the sixth fewest fantasy points to opposing centers, which could explain why Kanter had just 13 points and four rebounds in 24 minutes against them earlier this season. Tobias Harris has scored at least 20 points in four of his last six games, and if he reaches that plateau again Friday, he wins this matchup. 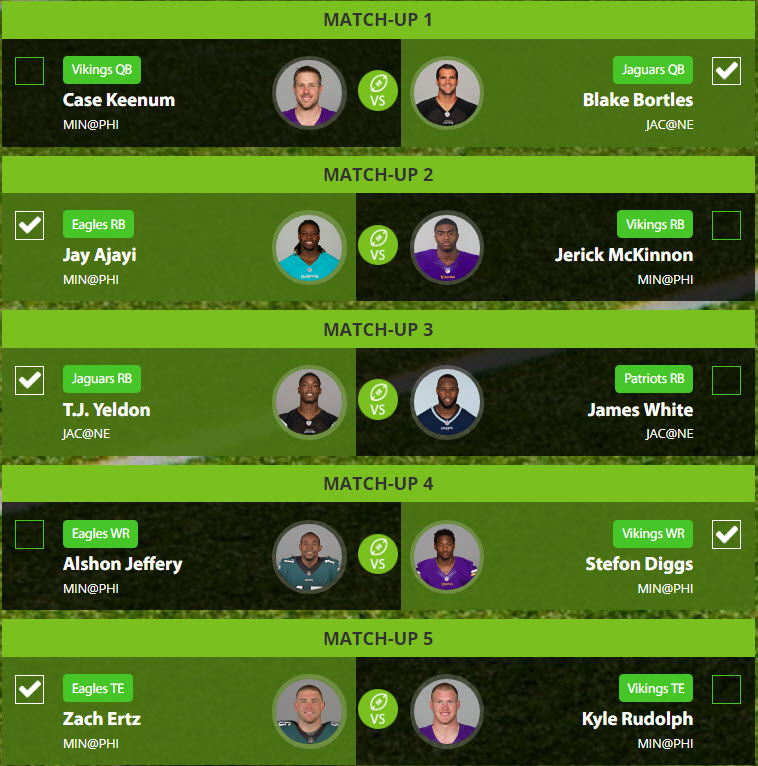 Keenum scored 11.8 fewer fantasy points during the regular season in one fewer game, though Sam Bradford started two of those games. Keenum is the better quarterback, even for fantasy, but Bortles has the far better matchup. If Philadelphia is able to get pressure, Keenum could have a rough day. It is also possible Minnesota gets up 20-0 and they do nothing but run the ball the second half.

Bortles only threw for 214 yards and one touchdown last week despite his team scoring 45 points. His rushing yards certainly help for fantasy, and there is the possibility of a negative game script where Bortles has to throw in the second half.

Ajayi led the Eagles in rushing attempts and yardage and was second in receiving yardage last week. Ajayi has found the end zone just once as an Eagle, but McKinnon has only two touchdowns over that same time span. McKinnon could have a big day receiving and make this pick look silly, but he has topped 31 yards receiving just once in his last eight games. Ajayi, who isn’t known as much of a receiver, has topped that mark in two of his last three games.

This is a fitting matchup of backup running backs who do most of their damage in the passing game. Both scored touchdowns last week, though White had two. White is probably more likely to get a touchdown in this game, but Yeldon is more likely to rack up receptions in garbage time if his team falls behind. All else being equal, give me the guy with the better matchup, Yeldon.

This matchup is incredibly interesting. DraftEasy offered this exactly same matchup last week, and Diggs won easily. Now they are paired again, except Jeffery has a more difficult matchup than he had last week while Diggs might actually have an easier one. I certainly trust Diggs’s quarterback more. If I had to choose between Nelson Agholor and Diggs it would be closer, but even then, I’m not picking against the guy who has scored a touchdown in four consecutive games.

Rudolph caught five passes last week, the first time he had reached that threshold since Week 11. He had only 28 yards, which is fewer than Ertz had last week on just three receptions. While Ertz is held back by Nick Foles, he did have six receptions for 56 yards and a touchdown in Week 15 and nine receptions for 81 yards in Week 16. Then again, those games were against the Giants and Raiders, not the Vikings. Kyle Rudolph caught five touchdowns in four games Weeks 12-15, and if he scores a touchdown he will probably win. Even so, Ertz is the better player, and he is far more likely to wind up in a game script that benefits him statistically.

C. Bojorquez - P
BUF
Bojorquez served as the Bills' only punter in 2019, kicking 79 times for a 41.9 gross average and 37.7 net average.
For a full breakdown and detailed player analysis GO PRO and join the Fantasy Alarm Family! CLICK HERE to unlock your PRO package and take advantage of instant savings!
Added 2:14 pm (EST)