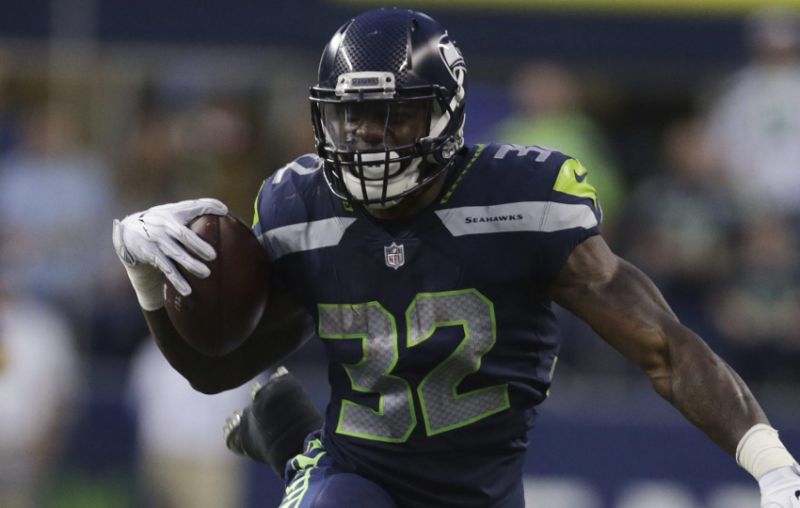 I thought for sure this article would be shorter than the Week 1 edition, but injuries and a few eye-opening performances have conspired to make this an even better week for pickups. If you kept your powder dry in Week 1, now may be a good time to make some aggressive bids, especially if you have some holes to fill in your roster.

The waiver adds below have been organized by 10-team leagues, 12-team leagues and 14+ leagues. At the end of each paragraph I have listed the approximate FAAB bid I would be willing to put in for that player assuming a $100 budget. As always, context matters. If one of the 12-team adds is available in your 16-team league—I’m looking at you, Rashard Higgins—be prepared to bid significantly more. 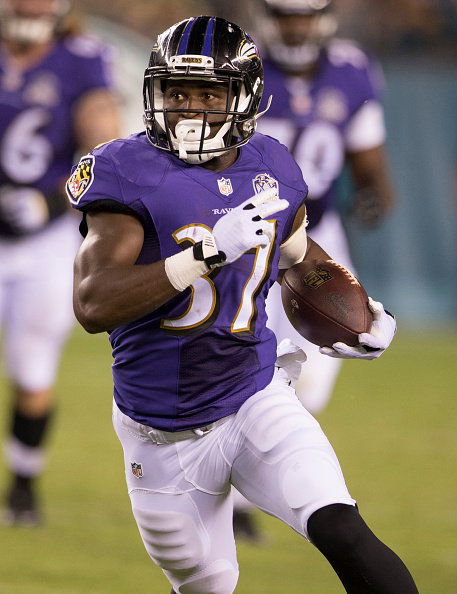 be 100 percent owned. Just keep in mind his offensive line is terrible and Pete Carroll could switch to a committee or another running back entirely at the drop of a hat.  $50

Javorius Allen, RB, BAL (57%) – At the very least, Allen is among the top tier of the pass-catching/change-of-pace backs who we will be hearing from throughout this article. If Terrance West’s soft-tissue injury keeps him out, Allen becomes a near must-start. If Allen plays well, there is a decent chance he can surpass West for the number one running back role in this offense. $40

Alex Smith, QB, KC (51%) – He may not have the highest ceiling in the world, but Smith benefits from having three dynamic weapons who can rack up yards after the catch when he inevitably throws it short. If you went into the season with Russell Wilson, Cam Newton or Kirk Cousins as your starting quarterback, Smith is the perfect quarterback to pick up and play the matchups for a few weeks. $10

Philadelphia Eagles D/ST (27%) – There are a lot of solid defenses with good matchups this week, so keep that in mind when you are spending your FAAB. While I like the Eagles the best, I would be content to get outbid and roll with one of the defenses listed below. The Giants’ offense has looked awful through two weeks, and even a healthier Odell Beckham is unlikely to change that much. Eli Manning looks like he is ready to throw four interceptions sometime soon, and it could easily be Week 3 against the Eagles. $3

Jack Doyle, TE, IND (64%) – Jack Doyle caught eight passes in Week 2 with Jacoby Brissett at quarterback, which is twice as many as Austin Hooper has through two games. Touchdowns may be difficult to come by while the offense struggles, but that could change when Andrew Luck returns. Doyle should be reliable going forward, which is all I am looking for if I am trying to replace Greg Olsen or Rob Gronkowski. $10

Darren Sproles, RB, PHI (45%) – Sproles had 12 touches Sunday compared to four for Wendell Smallwood and just one for LeGarrette Blount. His usage may change a bit as the season goes along, but for now, Sproles looks like the unquestioned number one running back in Philly. $20 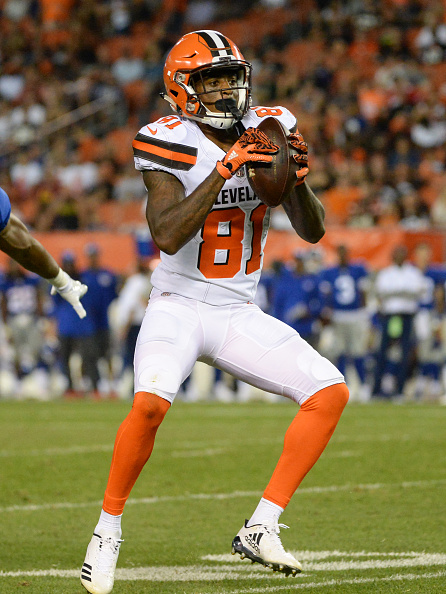 DeShone Kizer, QB, CLE (10%) – Kizer’s Week 2 numbers look ugly, but keep in mind he missed a chunk of the game while dealing with a migraine. If you combine Kizer’s fantasy points with backup Kevin Hogan, you would get the No. 14 quarterback through two games. After facing the Steelers and Ravens to start the season, Kizer faces the Colts in Week 3 and the Jets in Week 5. Any team that does not have a no-brainer starting quarterback should look at streaming Kizer. $20

Zach Miller, TE, CHI (5%) – Miller has 10 receptions through two weeks, trailing only Jasson Witten, Zach Ertz, Travis Kelce, Delanie Walker and Jordan Reed. The Bears are completely devoid of talent in at wide receiver, so Miller should be a reliable source of receptions moving forward. $20

Rashard Higgins, WR, CLE (5%) – Don’t call him Rasheed. Corey Coleman has a broken hand and Kenny Britt looks like garbage, which makes Higgins the de facto WR1 in Cleveland. I thought he looked good on tape in Week 2, and he wouldn’t be the first receiver to go from the practice squad to fantasy starter in the same season. $40

Trevor Siemian, QB, DEN (14%) – If Alex Smith is already owned in your league, Trevor Siemian is a reasonable facsimile. Siemian has fewer yards and more interceptions than Smith right now, and I am skeptical he can maintain his touchdown lead. That being said, he has two great receivers and a running game opponents have to respect. While Kizer is probably a better streaming option for this week, Siemian will probably be safer week to week. $15

Chris Thompson, RB, WAS (31%) – Thompson is fourth among running backs in PPR scoring despite only getting 13 touches through two weeks. By way of comparison, Tarik Cohen had at least 13 touches in each of the past two weeks. Thompson will get more work if Washington falls behind, but it isn’t a great sign that he had one fewer touch in Week 2 despite Rob Kelley’s injury. Thompson has probably earned more touches, but it is will hard to trust him until he actually gets them. $10

Devin Funchess, WR, CAR (13%) – Even if Devin Funchess gets more targets when Greg Olsen out, there is no evidence to suggest he is good enough to do much with them. That being said, this isn’t a great week for wide receivers, and if he has a quiet couple of weeks you can always drop him for somebody else. $5

Samaje Perine, RB, WAS (23%) – If you play in a league where Rob Kelley is a fantasy starter, then Samaje Perine is probably worth a pickup. Chris Thompson is a better player who will actually catch the ball, but Perine had 22 touches Sunday and will likely get the goal line work. His upside is limited, and there is a decent chance Kelley plays in Week 3 and Perine goes back to just being a handcuff. $5

Jermaine Kearse, WR, NYJ (8%) – Kearse is basically a glorified tight end at this point. He has at least four receptions and at least 59 yards in both games this season, but he isn’t particularly likely to get you much more than that. This team is unlikely to score a ton of touchdowns, which limits Kearse’s upside even further. That being said, he is safer than Devin Funchess and possibly even Rashard Higgins. $10

Miami Dolphins D/ST (5%) – Miami’s defense didn’t score much for fantasy in Week 1, but they went on the road and held the Chargers to 17 points, which is respectable. Now that get a Jets team that has turned the ball over twice in each of its first two games, and I think I would take the over on two more turnovers Sunday. $2 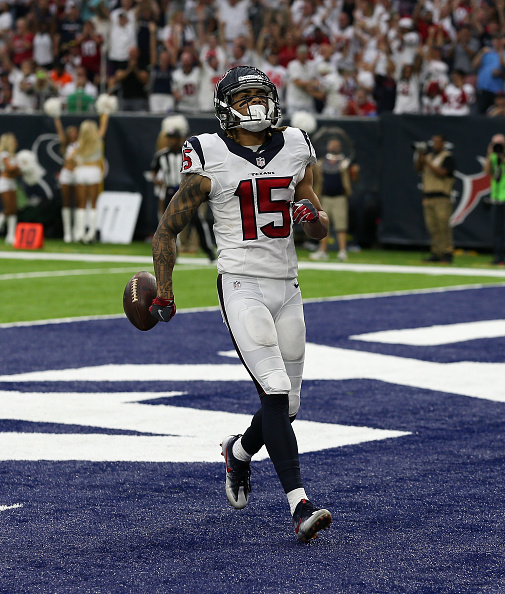 Phillip Dorsett, WR, NE (5%) – He caught three passes for 68 yards last week, and he could be even more involved going forward depending on how all of the injuries shake out in New England. He has a high ceiling, even if he isn’t particularly likely to reach it anytime soon. $5

Will Fuller, WR, HOU (3%) – Fuller returned to practice Monday and the Texans released Jaelen Strong, making it likely Fuller will return to the field in the next week or two. Fuller demonstrated his big play ability last season, and while he might never be a consistent fantasy contributor, there will probably be more big plays in his future with Deshaun Watson at quarterback. $5

Cleveland Browns D/ST (2%) – You could easily talk me into putting the Browns above the other defenses I recommended. I think the only reason their ownership is so low is they are the Browns and fantasy players associate that name with incompetence. They rank 20th in fantasy points among defenses despite playing the Steelers and Ravens so far. I think they will do much better against Indy, and if you pick them up now, you can start them in Week 5 against the Jets as well. $2

Austin Seferian-Jenkins, TE, NYJ (3%) – The problem with picking up Austin Seferian-Jenkins, even in a deep league, is that it will be difficult to trust him in Week 3 coming off of his two-game suspension. I would love to see him on the field before I commit him to my lineup, and not a lot of fantasy players will have that luxury. That being said, he is almost certainly the most talented Jets receiver, and he could actually be a better version of Zach Miller going forward. $5

Curtis Samuel, WR, CAR (3%) – Samuel was limited by an ankle injury in the preseason and was questionable heading into Week 1. The hope here is the combination of better health, more practice time and Greg Olsen’s injury lead to more work as the season goes along. Samuel has a chance to be a dynamic receiver despite his smaller stature, but it may not happen for several weeks, if at all. $5

Markus Wheaton, WR, CHI (2%) – Wheaton practiced in a limited capacity last week, so it wouldn’t be surprising to see him suit up in Week 3. He could easily lead the Bears in targets once he returns, and that is worth something in deep leagues. $5