Broken Hearts and other NBA Injuries 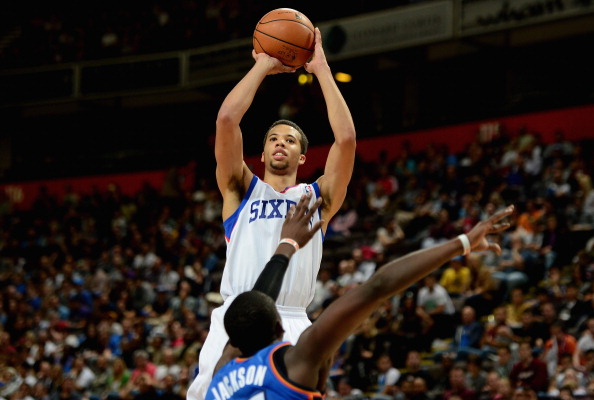 Tom Petty was right. The waiting is the hardest part. While Tom Petty probably meant it in the romantic sense—quite appropriate for Valentine’s Day—I believe it also applies to fantasy basketball this week.

Just waiting for real games to resume is hard enough for me, but what is really frustrating is waiting for more injury news. With a week in between games, nearly everyone with an injury is questionable to return after the All-Star break. All we can do is wait until teams resume practicing to hopefully gain a better idea of who is healthy.

Like all single guys on Valentine’s Day, all we can do is try to get through it. Personally that means watching the 3-point shootout with my dog Lucy and a six pack of Michelob Ultra. For this article, it means taking a look at the information we do have and trying to plan accordingly. Hopefully none of these players have broken your heart this season.

Blake Griffin underwent surgery Monday to remove a staph infection from his right elbow, and he will be evaluated after three weeks. In the three games, Griffin has missed with this staph infection Matt Barnes has averaged 11.5 points, 6.3 rebounds, 2.0 assists, 2.0 steals and 1.5 3PM. That production may not continue, especially if the Clippers make a trade or pick up someone line Amar’e Stoudemire after the buyout deadline.  Until then, Barnes is worth a shot in most leagues, as he can help you in nearly every category when he is playing well.

Steven Adams is expected to miss at least three weeks after having surgery on this right hand Monday. Mitch McGary averaged 18 points and 10 rebounds in relief of Adams Sunday and Monday before going scoreless Wednesday while Nick Collison had 15 points and nine rebounds. Those two will probably take turns having nice games for as long as Adams is out, but of the two I like McGary.

Tyson Chandler sprained his left ankle a minute into Monday’s and did not play Wednesday. The time off for the All-Star break will help, though there is no timetable for his return. Charlie Villanueva had 26 points Monday and could be useful if Chandler is out. He is pretty risky, however, as he could just as easily get benched.

Kevin Love should be just fine after the All-Star break despite missing Thursday’s game at Chicago with an abrasion to his cornea. If he did miss more games for some reason Tristan Thompson would be worth a pickup in most leagues.

Anthony Davis will not play in the All-Star Game due to a shoulder strain. His status after the break is up in the air though it is possible the Pelicans are just being extra cautious with Davis with the All-Star break there to give him an extra week of rest. With Davis and Ryan Anderson out the last two games, Alexis Ajinca averaged 11 points, 5.5 rebounds, and 1.0 blocks. Anderson is expected to return after the break, but Ajinca would be a decent fantasy play if Anderson has a setback.

Jrue Holiday’s status is a bit more up in the air, but it seems he has a decent chance to return to practice during the All-Star break.  Eric Gordon has averaged 13.6 points and 4.9 assists in his last 10 games, but he will be droppable once Holiday returns. Holiday has been dropped in some shallow leagues and should be picked up now if he is available. His 7.1 assists per game are too good to ignore in any format.

Michael Carter-Williams has missed three consecutive games with a sore toe. The 76ers haven’t played since Monday, giving MCW plenty of time to recover. Rookie Tim Frazier has averaged 8.7 assists with Carter-Williams out, and while his scoring and turnovers are problematic, he is worth adding if Carter-Williams does not return after the break.

No one has broken the hearts of fantasy owners this season like Carmelo Anthony. A shutdown has appeared inevitable for some time, but all we could do is keep him in our lineups and hope to get a handful of good games before he pulled the plug on the season. His fantasy owners should continue to hold onto him until he is officially shut down; waiting another week isn’t going to hurt anything anyway. The Knicks still haven’t won a game this season without Carmelo, and there really isn’t much to see there with him out. Langston Galloway and Tim Hardaway Jr. have some upside, but there is no reason to expect them to suddenly figure things out down the stretch. It is probably best to just ignore the Knicks for fantasy.

Jimmy Butler is questionable to play in the All-Star Game, which seems like a pretty clear indication he will be ready to go when the Bulls resume their season February 20 at Detroit. Tony Snell had a great game starting for Butler against the Cavaliers Thursday, scoring 22 points and helping limit LeBron James to 12-26 from the floor with eight turnovers. It was Snell’s second consecutive20 point game, and he is now averaging 18.3 points over his last four games. With Mike Dunleavy already back from his ankle injury and Butler and Kirk Hinrich expected back after the break, Snell’s breakout is likely over, at least for now. He has probably played his way into Tom Thibodeau’s rotation, however, and could be useful in deep leagues.

Dwayne Wade is likely to play in Miami’s first game back after the All-Star break. He went through a full practice Wednesday, and with another week off he should be fine. His fantasy owners should check on his status closer to the game, but if he is active he needs to be in your lineup.

The good news about the All-Star break is we should have very few new injuries. Hopefully you and the players on your fantasy teams can avoid any broken hearts this Valentine's Day.