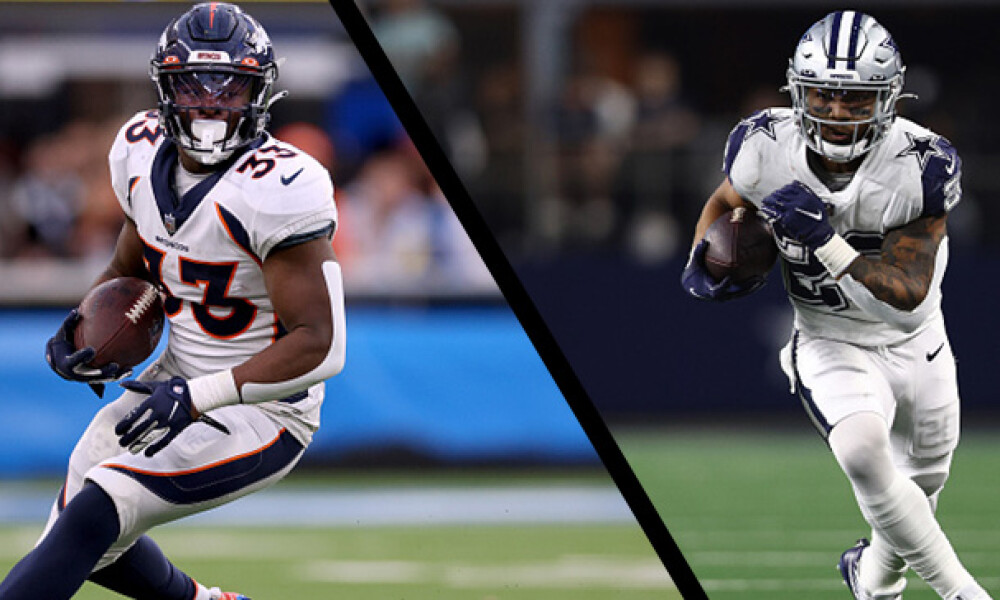 You know what makes drafting an Underdog Fantasy Football Best Ball Mania III team that wins $2 million easier? Crossing a bunch of potential running back busts off your list before the draft even starts. It cleans up your fantasy football rankings and gives you a clear vision of the players you actually want to draft and when.

So that’s what we are doing today. Going through average draft position (ADP) for running backs and singling out some guys to fade. That doesn’t necessarily mean we don’t like them - just that we don’t like them relative to the cost. Once you head on over to Underdog Fantasy and use promo code ALARM to create an account (where they will match up to $100 in bonus credits with your initial deposit), you can start taking advantage of articles like this one, our roster composition strategies, our stacking strategies etc.. And then you might win a million bucks!

I’m not sure if folks have noticed, but Melvin Gordon is back. And, based on Javonte’s ADP, I don’t think some people have noticed. Now, that’s not saying that the split will be exactly the way it was last year. But we detailed that split in full in a separate article and, even down the stretch after his injury, Melvin Gordon was getting more carries than Javonte Williams. And he was more efficient too, averaging 4.6 yards per carry over the final five games to 3.7 for Javonte Williams. They even played a near-identical number of pass snaps in the games they were healthy with 296 for Melvin and 294 for Javonte. The work was pretty much down the middle. The organization has split the backfield for a while now. Nathaniel Hacket comes from an offense that split backs for a while now. It’s not hard to see that continuing.

And that’s an idea we often have trouble getting beyond for this game we play. Real-life football is not like fantasy football. Coaches don’t look at two capable running backs and say “well, we have two good players, so let’s just use the one”. Quite the opposite. That’s why they paid Melvin Gordon to come back. In this format, we want spike weeks and a lot of those come in games where a team is winning and they just feed their running back. But in this case, there is no reason to give one running back 25 touches and give the other guy five in a blowout. It caps the ceiling of both guys. So, given the ADPs, I’d rather just wait and take Melvin Gordon at RB36. I mean, he did score more fantasy points per game than Javonte last year.

This fade honestly isn’t because I don’t think Josh Jacobs can finish as the RB23. I’m sure he can. But this is best ball. We just talked about spike weeks. We want guys with high upside.  And I’ve seen the way that the modified Erhardt Perkins system that Josh McDaniels runs works. The New England Patriots, where McDaniels comes over from, have not had a running back get both 200+ carries and 35+ receptions in a season since Curtis Martin and Robert Edwards in the 90s. When Pete Carrol was coach. That’s a long time. The highest RB finish the Patriots have had in any format is James White at RB7 in 2018 - he had less than 100 carries. LeGarrette Blount once scored 18 TDs with Tom Brady but he only caught 7 passes. That’s the kind of split we are potentially looking at here.

Some might say “well Josh McDaniels didn’t necessarily use a split backfield in Denver”. To which I would say “that was a decade ago, dude”. And those teams weren’t successful - hence why he ended up back in New England. Not only was this roster already built for a split backfield with Josh Jacobs and Kenyan Drake, McDaniels went out of his way to bring in Brandon Bolden (from the Pats), rookie Zamir White, and capable pass catcher Ameer Abdullah. If I wanted Damien Harris, I would just draft Damien Harris.

Tony Pollard has been a darling of the fantasy community (especially the dynasty community) for a couple of years now. They’ll point at efficiency metrics and Pro Football Focus grades and predict a monster breakout someday. The “someday” portion however continues to be the hangup.

The Cowboys like the one-two punch they have. Zeke plays the high leverage situations as they can trust him to pass block or get the yards on 3rd and one or goal line. They then use Tony Pollard to return kicks and spell Zeke for a package of plays where he can take end-arounds and get out in space. They like this setup so much that they continued to use Zeke in his role for the entire season despite him tearing his PCL in Week 4. And folks might not realize but, earlier in that Week 4 games, Zeke actually recorded his highest on-field speed since 2016. The team that came in second in Best Ball Mania II last year had Zeke on his team and in his lineup for 15 of 18 weeks. The reality here is that this split is likely to continue at least for another year and, if that’s the case, we can find similar players later on. If you want a handcuff, Alexander Mattison is there at RB40 and Dalvin Cook has gotten hurt every single year of his career. If you want standalone value, JD McKissic averaged 9.7 points per game last year to 9.1 for Pollard and he’s going off the board nearly 100 picks later. A hundred.