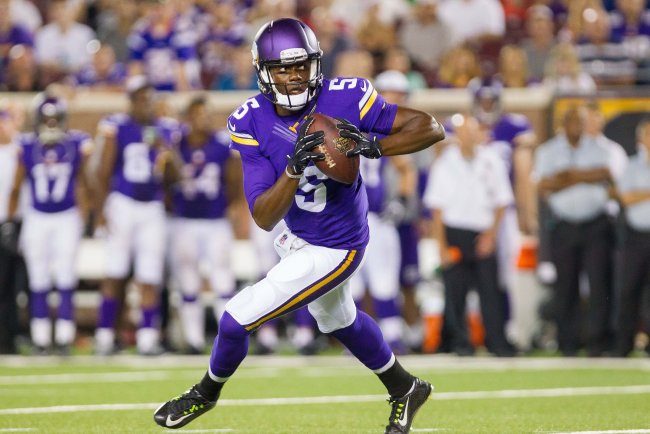 This season, David Kerr is going to break down several players at each position and recommend whether to buy or sell going forward. We are one day away from kickoff, so let’s hit the ground running with the inaugural edition of Fantasy Football Trade Market here at FantasyAlarm.com.

Let’s face it, barring some type of surprise, the 49ers are going to have a rough year as a whole. With a head coaching change, retirements, and players bolting via free agency, this team doesn’t look all that familiar to the one that went 8-8 last year. What is the same, though, is the man under center. Kaepernick’s biggest asset is his feet and, outside of standard leagues, that really doesn’t play well in most fantasy formats. It is encouraging that Kaepernick increased his completion percentage from 58.4 percent in 2013 to 60.5 percent last year, but he was also sacked 52 times, which was good for second in the league. With Frank Gore out of the equation, San Francisco is going to have to rely more heavily on Kaepernick, but that doesn’t mean your fantasy team should.

Verdict: SELL. It is doubtful that Kaepernick’s value will ever be higher than it is right now. It will only take fellow owners a week or two to see that Kaepernick is overrated as a quarterback. Move him now while you still can.

As a rookie in 2014, Bridgewater threw for almost 3,000 yards, completed 64.4 percent of his passes, and boasted a very solid 85.2 QB rating. With Adrian Peterson back in the fold, defenses are going to have to respect Minnesota’s running back which, in turn, will lead to more open looks for Bridgewater. It certainly doesn’t hurt that the Vikings now have two solid weapons at wide receivers. Veteran Mike Wallace should post his typical numbers, while Charles Johnson is primed for a breakout. Though Bridgewater is currently a fringe starter in most leagues, he is a prime example of the kind of quarterback you can get if you be patient with the position while stocking up on running backs and wide receivers early.

It seemed like Andre Ellington was a game-time decision every week after suffering a foot injury that hampered him the entire season. He didn’t show much growth as a running back as his yards per carry average dropped from 5.5 in 2013 to 3.3 last season. Where he did improve was as a receiving option out of the backfield. Ellington hauled in 46 passes for 395 yards and if he’s able to stay healthy, both of those numbers should increase in 2015.

The best news surrounding Ellington is that he really doesn’t have a ton of competition behind him. Arizona brought Chris Johnson into the fold, but his days of being relevant are long over. Rookie David Johnson could push Ellington for more playing time, but it isn’t expected that the Cardinals will just throw him into the fire. With Ellington apparently at full health, he is likely to take a huge step forward this season and reward fantasy owners, especially those in PPR formats.

Verdict: BUY. With massive PPR upside, Ellington makes for a strong RB2 this season. He’s going to be part of a lot of championship teams this season.

The Saints signed Spiller to a four-year deal in March hoping that a fresh start would rejuvenate the veteran running back. The problem is that outside of one solid season in Buffalo, Spiller has been an underwhelming fantasy option. He moves to New Orleans where he will play behind Mark Ingram. This means he’s only in for roughly 10-12 touches and that is only when he gets on the field; Ingram is out Week 1 versus Arizona. Spiller’s value will be found in PPR leagues, but it will not be enough to warrant his current Mock Draft Army ADP of 51.2.  You know how Spiller has burnt you in the past. Don’t let him do it again this year.

Verdict: SELL. Spiller is overrated as a fantasy producer. If he’s able to return for Week 2, pray that he has a big game and trade him away.

The veteran running back missed the majority of training camp, but received good news this week in his recovery. There is no set timetable for Foster’s return, but it sounds like late September or early October is when he will make his season debut. While there is certainly always a chance of being reinjured or having a setback, Foster is the type of talent that you should take a risk on. Once he returns, he will be a clear RB1 and this is the only time this season you will be able to get him for a RB2 price.

Verdict: BUY. Foster has been a fantasy beast over the last several seasons. Once he’s back on the field, he will put up his usual numbers.

AC joint injury, be damned! Even before Jordy Nelson went down with a season ending ACL tear, Cobb was primed for yet another huge season. Now that he’s the top dog in Green Bay, he should have no issue reaching and surpassing the 91 receptions, 1,287 yards, and 12 touchdowns he posted a season ago. He is a legit WR1 and will perform as one this season. If your league drafted before he went down with a shoulder injury, it is possible that his owner could be a bit nervous. Now is the time to swoop in and make a deal.

Verdict: BUY. Cobb is too legit to quit. He will be Aaron Rodgers’ top target this year and that can only mean huge things are in store for the fifth year wideout.

Once a solid contributor in Buffalo, it looked as though Johnson’s career was going to die in San Francisco. Luckily he got out of the Bay Area and headed south to San Diego. After a strong camp, many within the Chargers’ organization are touting him for a big season. Before you think he’s a guy you should own on your fantasy team, you need to be aware that this is preseason hype at its best. There is no question that Johnson was in a bad spot last season, but he wasn’t exactly a staple of success during his last season in Buffalo either. Once Antonio Gates returns from a four-game suspension, there will be fewer targets to go around. Don’t buy into the Stevie Johnson hype train. Move him now before you realize that Stevie Johnson is on your roster.

Verdict: SELL. Johnson’s best days are behind him. If he could rattle off a couple of big games, it would be more beneficial to his trade value, but moving him after a strong preseason is your best bet. He’s nothing more that a WR5, so if you could package him with another player to make an upgrade somewhere, you’d be doing yourself a huge favor.

We all know that tight end is a crapshoot after Rob Gronkowski is off the board; that’s why it is usually wise to wait on the position until the later rounds and hope to find value. Now that Daniels is in Denver, he epitomizes the word in a fantasy football sense. Under new head coach Gary Kubiak, the Broncos are going to be using a two tight end set more often than not. We’ve seen in the past how Peyton Manning likes to utilize his tight ends and this should translate into an uptick in Daniels’ production. We saw what Julius Thomas did with Peyton Manning and it worked out quite well. With an ADP of 163.2 in PPR Leagues, Daniels is going to provide low-end TE1 numbers for the price of a low-end TE2.

Verdict: BUY. He’s playing in an offense that suits his skill set with the best quarterback he’s ever played with.