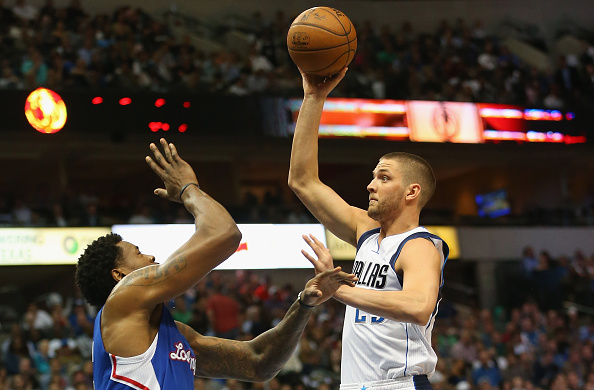 10. Marcus Morris, Detroit Pistons- Morris was traded to the Pistons, where he should flourish with an increase in playing time. He averaged 10.4 points, 4.8 rebounds, and 1.4 three-pointers made in 25 minutes per game last season with Suns. However, he was competing with Brandan Wright, his brother Markieff Morris, and a handful of small forwards for playing time. That will not be the case in Detroit, where they literally don’t have an established small forward and Ersan Ilyasova is slated as their starting power forward. That means Morris will get minutes at both positions. Morris’ per-36 minutes last season looked like this: 16 points, 6.4 rebounds, 1.4 steals, and two three-pointers made per game. While he’s unlikely to play 36 minutes per game, he should definitely play over 30 minutes per game next season. His brother Markieff Morris is also a player that will flourish in Phoenix with Marcus and Brandan Wright gone.

9. Chandler Parsons, Dallas Mavericks- This is his year to prove how great of an NBA player he actually is with Monta Ellis is gone, Wesley Matthews is not going to be same player he was before the Achilles injury, and Dirk is another year older. That means Parsons SHOULD to be the focal point of the offense. His stats haven’t really changed the past couple of season as he’s averaged about 16 points, four rebounds, two-three assists, and two three pointers made per game. They signed Parsons to eventually be their franchise players, so this is the season where he’ll have to prove that he is worth the money that the Mavs gave him. Look for his field goal attempts to jump from 12.6 per game last season to about 15 to 16 this season, which would increase his points per game. Right now, Parsons is better for rotisserie formats than for total points leagues because he contributes in stats across the board.

8.  Willie Cauley-Stein, Sacramento Kings- The Kings got rid of Jason Thompson and didn’t re-sign Derrick Williams in order to create more playing time for Cauley-Stein. He will struggle a bit on offense, but he’ll be a great source for blocks and rebounds. His field goal percentage will also be high as most of his shots will be close to the rim. He’ll be a great late round pick in rotisserie leagues.

7. Myles Turner, Indiana Pacers- This guy is my dark horse for rookie of the year. He’ll play huge minutes for the Pacers as they don’t really have any other center on the roster besides Turner since they traded Roy Hibbert to the Lakers. The Pacers did sign Jordan Hill, but he’s not that good, which is why he was signed to be their backup center and he is better suited to play power forward than center. Turner showed the ability to knock down long range shots in summer league. While it is only summer league, he did average 18.7 points (60.5 FG %), 8.3 rebounds, and an absurd 4.3 blocks in three games. Look, the Pacers want to be a fast paced offense and Turner can run the court very well, which will lead to fast break dunks and put backs. Overall, he is going to be one of the biggest draft day steals in any fantasy format and will be a great player to target in DFS.

6. Robin Lopez, New York Knicks- Gets the unfortunate opportunity (or fortunate opportunity for fantasy players) of playing for the New York Knicks this year. Ro-Lo will be the starting center for the Knicks, which means he’ll play huge minutes for them since they too don’t really have any other proven center on the roster. He averaged only 9.6 points, 6.7 rebounds, and 1.4 blocks in 28 minutes per game last season. However, he averaged 11.1 points, 8.5 rebounds, and 1.7 blocks in 32 minutes per game as the Blazers starting center in 2013-14. He could eclipse those numbers this season as he’ll definitely play over 30 minutes per game and could flirt with 36 minutes per game, that means he could average close to a double-double, while recording almost two blocks per game. That would make him a valuable fantasy asset considering there were  only three players last season that averaged a double-double with at least two blocks per game (DeAndre Jordan, Anthony Davis, and Hassan Whiteside).

Make sure to check back with Fantasy Alarm as the final five players on this list will be revealed soon.