Tonight is one of my favorite basketball nights of the year as I get to see Grizzlies, in person, vs the Wizards. However, Mike Conley, Zach Randolph. Marc Gasol, and Tony Allen not playing definitely puts a damper on things, but that does mean there will be some great value options from the Grizz. Also, this is an unusual Thursday with five games on the slate as there are usually only two games on a Thursday night.

The point guard position is loaded with quality mid-tier options tonight. Tony Parker is the number one option at the position because his price tag is low and he has been vintage Tony Parker recently. Jeremy Lin and Jordan Clarkson are good low-tier options. Beno Udrih is likely going to get the start for the Grizz, which makes him a superb value option on any site. Nick Calathes is a sneaky contrarian option that will also see a huge bump in minutes for the Grizz as well.

The shooting guard position is crap tonight, especially on Fanduel. James Harden is the best option at the position, but he has struggled vs the Jazz this season. Courtney Lee is a great punt play option, but temper your expectations for him as his ceiling is about 25 FP. Danny Green would become an amazing option at the position if Manu Ginobili does not play. The small small forward position has some quality mid-tier options. Meanwhile, Kawhi Leonard is playing at such a high level right now that I find it hard not putting him in my lineups. Jeff Green burned people last night, but expect him to bounce back with a good game tonight.

Don't over think it at the power forward position, so roster either  Derrick Favors and/or Terrence Jones. Jon Leuer is going to be a popular player to target, but he's more of a boom or bust type of player that should only be used in GPPs. The center position is led by Rudy Gobert, who should dominate the Rockets front court. However, I really like Kosta Koufos tonight as he'll get close to a double-double and is practically minimum salary across the board. Marcin Gortat is going to be a contrarian option that will tear up the Grizz front court.

Here is The Daily Fantasy Basketball Playbook for March 12th:

WE WANT YOU WITH US FOREVER. We lowered our LIFETIME MEMBERSHIP package to PROVE IT. Join the #FAmily & everything we do until the end of time is yours for this LOW PRICE. Use Promo Code: FOREVER
COMMENTS
Load More Comments.. 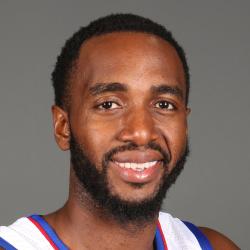 T. Sefolosha - PF
HOU
Thabo Sefolosha is opting-out of Orlando restart, according to Adrian Wojnarowski of ESPN.com.
He was barely in the rotation at times with minutes in the 8-10 range most nights, and the Rockets should still be fine with forward depth as long as P.J. Tucker, Danuel House and Robert Covington are healthy.
Added Yesterday 5:44 pm (EST)
Added Yesterday 5:44 pm (EST)

C. Swanigan - PF
POR
Caleb Swanigan has opted out of the NBA restart in Orlando.
This is an update from coach Terry Stotts earlier today saying that Swanigan was uncertain to head to Orlando. The Blazers should be OK without him in their rotation, especially with Zach Collins and Jusuf Nurkic ready to play and without restrictions. The Blazers will be allowed to sign a replacement player to their roster.
Added Yesterday 5:36 pm (EST)
Added Yesterday 5:36 pm (EST)

R. Hood - SF
POR
Rodney Hood (left Achilles) was able to dunk at a workout.
He jumped off two feet and looked excited to get the ball through the hoop. Hood will not be playing in the NBA restart, but hopefully he will have enough time to recover and be ready for training camp. Hood has been out of a walking boot since April and suffered his injury back in December, so there's a good chance he ready for training camp.
Added Yesterday 5:25 pm (EST)
Added Yesterday 5:25 pm (EST)

G. Trent - SG
POR
Coach Terry Stotts mentioned Gary Trent Jr. and Carmelo Anthony as options to replace Trevor Ariza as the starting small forward.
The Blazers suddenly have a lot of depth up front, so moving Melo over to the three makes sense to clear up minutes at the four. Trent has been a combo wing for the Blazers and is usually one of the first subs when C.J. McCollum checks out earlier in the first to stagger away from Damian Lillard a bit. Trent Jr. doesn't do much besides score, so he won't have much nightly upside when the Blazers stars are active.
Added Yesterday 4:52 pm (EST)
Added Yesterday 4:52 pm (EST)

B. Clarke - PF
MEM
Coach Taylor Jenkins said Brandon Clarke (right quad) and Jaren Jackson Jr. (knee) are "looking good, feeling good" and are expected to be ready for Orlando.
JJJ was extremely close to a return prior to the NBA hiatus, so he should certainly be a full go. Clarke was "progressing" the week of the shutdown, but obviously the time off helped him get right. It'll be interesting to see how the Grizzlies use Clarke, especially if the Grizzlies get the Lakers in the first round and they'll want to have a ton of size against Anthony Davis and the bigger LAL front line.
Added Yesterday 4:47 pm (EST)
Added Yesterday 4:47 pm (EST)

J. Winslow - SF
MEM
Justise Winslow (back) should be ready to play in Orlando.
Coach Taylor Jenkins mentioned that Winslow is "looking good, feeling good," which shouldn't be a surprise after Winslow said he's been symptom-free since April. The Grizzlies likely added Winslow to be their starting three, so he could take minutes away from De'Anthony Melton, Dillon Brooks, Kyle Anderson and maybe even Tyus Jones. Winslow's back injury has kept him to just 11 game so far this year, so the Grizzlies may have to come up with a plan to getting him back out there.
Added Yesterday 4:35 pm (EST)
Added Yesterday 4:35 pm (EST)

G. Allen - SG
MEM
Coach Taylor Jenkins said Grayson Allen (left hip) has progressed and the team will know a lot more on his status when he can play 5-on-5.
Back in February, Allen was expected to miss the rest of the season, but the additional time off helped his hip soreness heal. With Justise Winslow (back) in the mix and De'Anthony Melton showing he needs more playing time, Allen may not be in the rotation anyway.
Added Yesterday 4:29 pm (EST)
Added Yesterday 4:29 pm (EST)