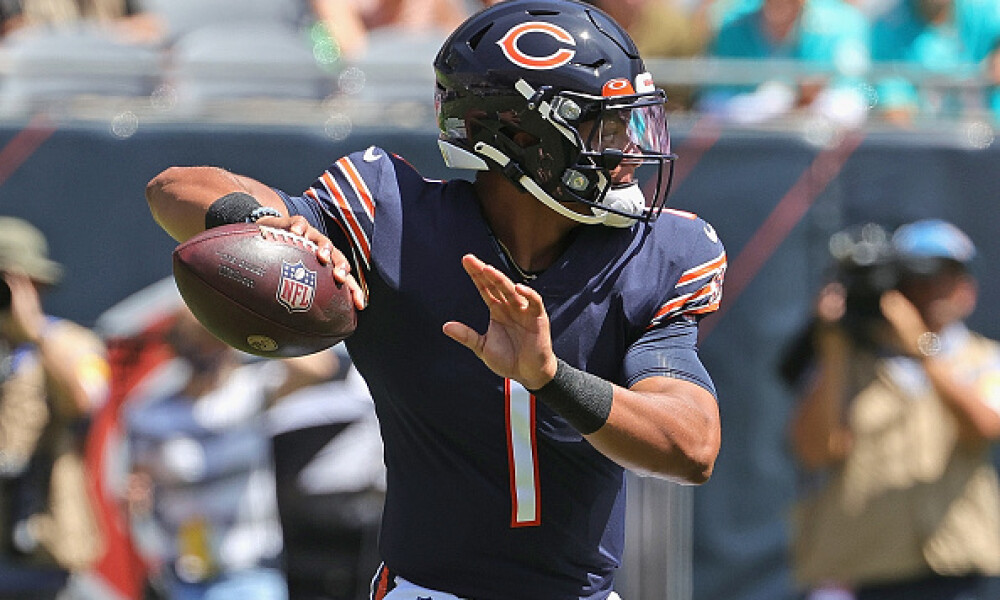 Have a Fields Day

Early in the offseason the Chicago Bears tweeted a picture of Andy Dalton with the text line of QB1. This was mocked by many but at the time the Bears didn’t really have a better option.

That was until the NFL Draft when the team moved up in the first round to draft Ohio State QB Justin Fields. From that point the not IF but WHEN debates begin for when Fields would take over as the Bears starting QB. Throughout training camp, the hype surrounding Fields play had only intensified as the team headed towards its first preseason game which would give the world its first look at Fields in an NFL game and boy did he not disappoint as he finished 14-of-20 for 142 yards and one touchdown while adding five carries for 33 yards and another score.

Not everything was perfect, but you can see why everyone is excited for Fields to be the Bears starting quarterback over a veteran like Andy Dalton. Fields is currently going off the board as QB18 with an ADP of 141.82 during the month of August.

Another rookie QB made their preseason debut on Saturday and this time it was Trey Lance. Lance has entered this preseason with just as much hype as the rest of his rookie class after the 49ers made him the number three pick in this past years draft. Lance made an instant impression on the 49ers faithful and the rest of the football world on just his second throw as he connected for an 80-yard touchdown pass.

Lance finished the game just 5-for-14 for 124 yards and a touchdown, so not nearly as exciting as Justin Fields and the 49ers have been pretty adamant that Jimmy Garoppolo is going to be their starting QB this season. Lance is going ahead of Justin Fields in drafts right now, coming off the board as QB16 with an ADP of 129.51.

Last offseason the fantasy community spent the offseason drafting Jordan Howard and Matt Brieda after the team signed Howard and traded for Brieda leading many to expect the duo would be the backfield tandem in Miami. Unfortunately, the pandemic cancelled all the preseason games and training camp leading to almost zero coverage. What then happened was the shock to the fantasy community when Myles Gaskins was the Dolphins lead back in Week 1 of the season.

We head into the 2021 season and Gaskins is coming off the board as RB24 with an ADP of 56.46 with many expecting him to be the lead running back. However, the Dolphins signed Malcolm Brown this offseason and then in yesterday’s preseason game it was Brown who played the majority of the snaps with the first team offense and Gaskins who played with the second team offense which sent the fantasy community into a panic. Brown lead the team in carries with nine but totaled just eight yards while adding one catch for seven yards. Gaksins had four carries for 19 yards and added one catch for three yards. When asked about the running back rotation Head Coach Brian Flores said the team liked all three backs and considers them all to be starting caliber. Expect Gaskins stock to drop in drafts while Brown moves up after being largely undrafted.

This weekend we were watching the Denver Broncos and New Orleans Saints to see if we could find an edge on who would be the teams starting QB entering Week 1. For Denver, both Drew Lock and Teddy Bridgewater had little issue carving up the Minnesota Vikings. Lock completed 5-of-7 passes for 151 yards and two touchdowns which included a long touchdown pass to K.J. Hamler.

Teddy Bridgewater finished 7-of-8 for 74 yards and a touchdown himself. Neither QB is being drafted in standard league formats but if you are looking to draft any of the Broncos receivers you should at least be encouraged that both QBs showed capable abilities of throwing the football. Lock took a big step back last season in terms of consistency as his completion percentage finished below 60%. Bridgewater was able to support two 1,000-yard receivers in Carolina last year with both D.J. Moore and Roby Anderson hitting the mark. Currently Courtland Sutton and Jerry Jeudy are both being drafted as WR30 and WR33 making them WR3s in most formats.

QB Battle in the Bayou

Both Jameis Winston and Taysom Hill got reps at quarterback on Saturday. Winston looked good, completing 7-of-12 passes for 96 yards with one touchdown and one interception. The lone interception wasn’t even truly his fault either and he had this dime of a pass to set up the touchdown drive.

Hill finished 8-of-12 for 81 yards and an interception. He had zero rush attempts in this game which would seem a bit unusual given his running ability is where the appeal in him as a starting QB would be. Throughout camp reports have been that Winston has looked good and has a real shot to be the starting QB but the Saints did give Hill that contract extension. We will have to see how this preseason competition progresses.